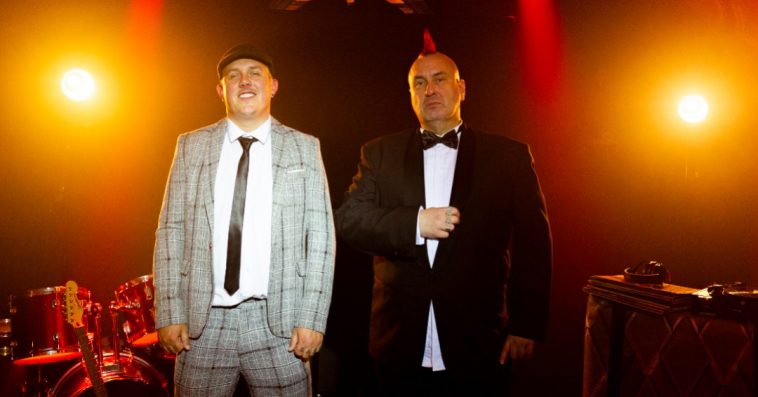 Fusing their respective styles, Dr Phunk & Rob GEE have come together for ‘The Sing Along Song’, a new dancefloor anthem combines two generations of hard dance.

‘The Sing Along Song’ is a real hard dance track which gets you in the mood and is perfect for a party. ‘The Sing Along Song’ is for everyone to sing along while the song contains no lyrics. It’s one that should live long in the memory of hard dance fans around the world. We asked both artists to give us the low down on their old skool meets new skool combination! Over to you both.

How long have you been making music for?

Dr Phunk: I started producing at the age of 17 and signed my first record deal when I was 18. 2023 will be my 15th anniversary.

What inspired this track/inspired you to get into hard dance?

Dr Phunk: When I grew up hard dance was played in every single club in the Netherlands, so it was hard for me not to like it. Also 2 of my cousins were first generation gabbers so I got their old CDs when they grew up.

Dr Phunk: I like both, but sometimes I miss the simplicity and effectiveness of the good old days. Much hardstyle is so overproduced nowadays while it loses effectiveness

If you could sum up your style in 3 words, what would you choose?

Where can you see the hard dance scene progressing?

Dr Phunk: I hope that I can bring my type of hard dance to the global audience by making it more approachable.

Are there any artists in the scene right now that are standing out for you and why?

Dr Phunk: D-Block & S-Te-Fan because every track they make is so well produced and effective.

Sub Zero Project since they conquer the world by storm.

Please tell us about any exciting news or plans you have for the end of 2022 and into 2023?

Dr Phunk: Cliche answer but loads of solid collabs, solo releases and tours around the globe.

What kicked started your route into music and producing?

Rob Gee: I’ve always loved all sorts of music as far back as I could remember. It kind of depended on who was watching over me as a child. If I was with my Mom; it was The Bee GEEs. When I was with my Father; it was Luciano Pavarotti. If I was with my Aunt; it was The Rolling Stones, and when I was with my Grandparents; it was Frank Sinatra. As far as what started me into producing; it was 2 things when I was about 14. The 1st was Hip Hop when I got my first set of turntables after hearing RUN DMC’s “Sucker MCs”; the 2nd is Thrash Metal when I picked up a bass and wanted to start singing as well after hearing Metallica’s “Disposable Heroes”.

And so what inspired you to get into hard dance?

Rob Gee: Well, when I was about 20 years old in 1991, I heard a song by LA Style: “James Brown Is Dead”; I never heard anything like this before. Then I found T99’s “Anastasia”, then Human Resource’s “Dominator, etc. In The USA, we were calling this music “Techno” or “Rave Music”; the subgenres of “Rave Music” had not really come into full light yet. However, when I heard Euromasters’ “Alles Naar De Klote” in 1992; I knew which direction I was going in.

How has the hardstyle scene changed since you started?

Rob Gee: Well, to be clear, when I started; there was no “Hardstyle” scene. There was not even a “Hardcore” scene yet. LOL. In fact, “Hardstyle” was spawned by “Hardcore”, but that’s a whole other conversation. One thing that stands out for me today is the need for some people to put a label on every song instead of just letting it be that Artist’s style. Ironically enough, while some are too busy calling their music this “type of style” or “that type of style”; a lot copycat each other and/ or lack in originality. In the 90’s, everyone just had their own style; there weren’t too many labels. For me, Good Music is Good Music; no labels required.

If you could sum up your style in 3 words, what would you choose?

Where can you see the hard dance scene progressing?Rob Gee: I can see the “Hard Dance” scene progressing into the mainstream. To some degree, it already has. I believe the future is bright. :-)

Are there any artists in the scene right now that are standing out for you and why?

Rob Gee: Brennan Heart is the 1st Artist that comes to mind for me. I love his music because of his originality in songwriting. He has the vibe that makes you feel good.

Please tell us about any exciting news or plans you have for the end of 2022 and into 2023?

Rob Gee: Let me just jump right into 2023; I will be celebrating 30 Years of Rob GEE with a World Tour of the same name. Look for me in a city near you.