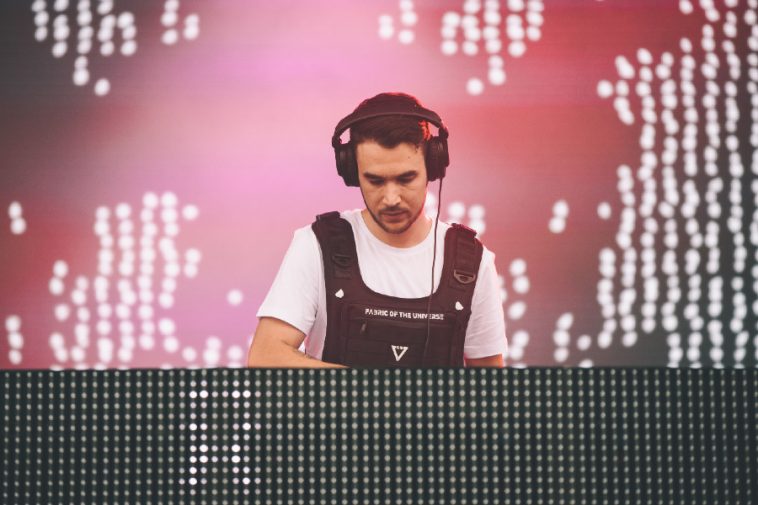 Melodic bass producer Egzod releases his brand-new single, “The Way Out,” featuring Bertie Scott, via Spinnin’ Records. “The Way Out” delivers a cinematic journey, exploring the emotions of “something slipping away.”

Born in Portugal, raised in France, and now based in the U.S., Egzod has amassed more than 200 million streams and millions of international fans, including over two million monthly listeners on Spotify.

Egzod, which means “Exodus” in French phonetics, is the narrative of a mass departure of people to another world where technology and nature are in perfect balance. Through his music, blending sounds and instruments from around the globe, Egzod works to empower and unify people.

CelebMix spoke with Egzod to discover more about the person behind the music, how he got started in music and his definition of tone.

What inspired your new single, “The Way Out?”

I have been finding a lot of inspiration in Hardwave in the past years as it is very cinematic but also combines both of my favorite influences: the melodic content from Trance and the heaviness of Bass music. Bertie Scott sent over some toplines and “The Way Out” fitted perfectly on a track I was working on, both lyrically and melodically.

Where and when did you connect with Bertie Scott?

I connected with Bertie Scott via Instagram last year. We’ve been going back and forth on different music ideas ever since. We recently finished another track together actually.

I first got into making music through the art of DJing at the age of 13. I’d spend time making mashups and mixes up until the end of high school. Starting college, I switched to music production because I wanted to start making my own records.

I was born in Portugal, close to Porto, and I grew up in the South of France. I’m currently based in Florida.

Did your hometown impact your music?

It did quite a lot. Electronic music has always been big in France – from the French Touch scene in the ‘90s/early 2000s with artists like Daft Punk, Justice, David Guetta, Martin Solveig, Breakbot – and now more recently in bass and house music in the past decade with artists like DJ Snake, Dirtyphonics, Habstrakt, Malaa, Tchami, CloZee. However, I’d say what influenced me more than my hometown, is the internet. I think that a lot of subgenres like Future Bass, Trap, Hardwave, and Dubstep exploded thanks to online forums and curators/labels on Youtube and other platforms in the past decade.

I’d say that I pushed it to a certain direction, being bass music blended with some orchestral elements. Then from there, my sound evolved naturally. I think it’s a never-ending process which makes music production always exciting.

How do you define tone? And has your tone changed over time?

Lately, it has shifted from an orchestral/eastern tone to a more futuristic/hybrid style I would say. Although, I tend to always keep it melodic. As mentioned previously, I think it’s a never-ending process and an artist’s style or tone evolves forever, although the essence is kept.

Definitely a lot of fantasy and sci-fi movies (ex: LOTR, Ghost In The Shell, Matrix)  – but also digital art and 3D animation (ex: Beeple). I listen to all music genres on a daily basis which helps me find inspiration as well.

I love resampling my own work that has never been released. Some of my biggest releases have come out of old projects that I would recycle or resample. Tip for the producers out there: keep ALL your works in progress stored – you’d be surprised what could happen with them years down the road.

I’m maybe biased because I’ve collabed with most of them but I’m genuinely a fan of their work. Here is the list in no particular order: if found, Afinity, Slippy, Arcando, Memba, Maazel, Nurko, Abandoned, Madzi, and Sublab.

Success is the accomplishment of a purpose. Part of society has put a lot of focus on success being exclusively related to numbers and the achievement of goals. I’d say it’s not exclusive to that and goes beyond those. Goals are a point of view to achieve – a purpose is the reason why we want to achieve these goals. I think finding the reason is what brings success.

I’m very stoked to be playing at Firefly for the first time and EDC Orlando this year. I’m excited to be making my debut on Spinnin’ Records as well with “The Way Out” which will be released with its lyric video. Expect lots of new originals and remixes following this release!