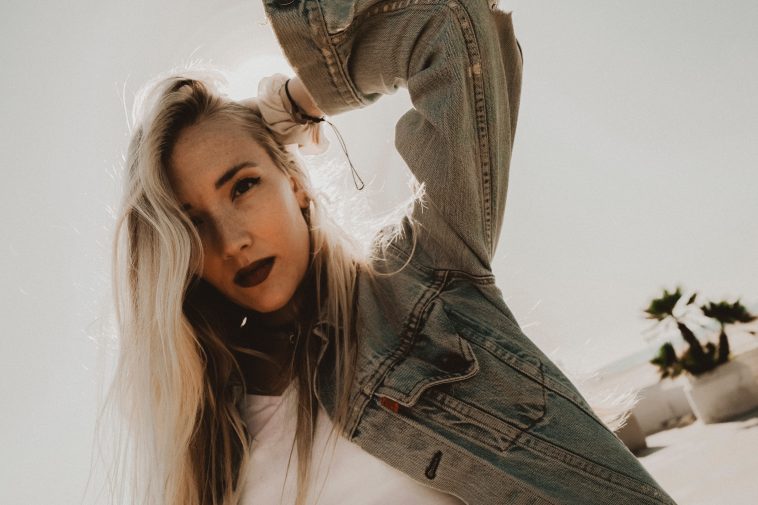 A self-professed ‘gypsy in spirit’ and ‘student of human behaviour’ the artist’s soundscape is truly freeing and her inspired indie approach is definitely something to be admired.

CelebMix decided to catch up with Chloé in light of her album’s release and had a chat about her journey into music, her debut record, and her plans for the future.

Such a pleasure to be able to speak with you today. How are things on your end?

Things seem to be rolling forward in my life and the world (finally!)- so positive!

So, let’s start at the beginning of your journey. What is your earliest memory of songwriting?

I remember writing my first actual song at 6 years old on the piano. I’d make up songs around the house all the time but I remember this one in particular was a full blown song. Then at 11 I had been very ill and music became my outlet to cope.  I taught myself guitar and began taking all those melody and lyric ideas and really making them come to life.

I’d write lyrics in my journal and remember I didn’t have a way to voice memo them so I’d attempt to “write out” a description of the melody to try to remember it. So funny. That’s when the passion truly began for me.

For most of us music always remains something that we enjoy in our spare time. What was the first moment when you knew that music was going to be more than just a hobby for you?

It was all I wanted to do ALL the time. I’d come home and the entire time I was doing homework I’d be singing (my poor sister!). I’d constantly be creatively writing. I’d also spend hours searching YouTube for new undiscovered music and artists that wrote their own original songs because I was so fascinated by how a song could understand you like nothing else.

Once I started sharing my original songs on Facebook, I’d go to school and people would come up to me and tell me how much they related to them and that’s when I knew I couldn’t stop.

You co-wrote the song ‘Ready To Come Home’ which featured in the popular 2012 film ‘The Great Gilly Hopkins’. Not many artists get to have their music featured in films. Could you tell us how this came about?

Since I was little I was obsessed with soundtracks from movies and would always try to picture how certain songs could compliment a scene. I’d daydream about it. One day I was presented with the opportunity to write a “coming home” song, I had very little detail besides knowing the movie was a book and the basic premise.

I wrote it alone on my little guitar in 15 mins and recorded it on my phone and sent it in having zero expectation. Much to my surprise, the director loved it so much and thought it would be cool to turn it from an acoustic song into something more pop so he brought in a producer that had been on the Voice and he added some flavor to it taking it to the next level.

Looking to the future, have you ever thought about getting more involved in writing film scores?

Oh wow that would be a dream come true. I definitely will always write songs for film/TV–its just something about writing something cinematic and the freedom that comes with that that I love. But writing a film score would be insanity, in the best way. I think I need to work on my music theory but hey, maybe ignorance will be bliss!! Some of the greatest film scores are such simple melodies.

Now, let’s talk about your phenomenal debut album ‘Everywhere I Go’. You started a Pledge Me campaign to fund the album back in 2018 and shortly after, the company went bust. You soldiered on, and then the COVID-19 hit. Can you explain how it feels to finally be able to share this record with your fans?

Honestly, like FREEDOM! It’s been this hidden thing for so long that just kept getting delayed, so it’s so rewarding to finally have people listening and responding to it so positively. You put in so much hard work to make it happen and then there’s a lull usually in between between getting to release it so once you do you almost fall in love with the songs again. Delayed gratification.

You have always been celebrated for your expressive and personal lyrics. Could you take us through some of the main topics you explore on the album?

Wow thank you!! Absolutely. Because this record was written over a couple years I got to tell a variety of stories as I really started growing into myself as an artist and woman. There’s a mixture of lost young love and  past heartbreak and the stages of grief that come with that as well as the journey of figuring out what it’s all about.

Then I get more reflective and look at what I want from not just love but LIFE and what I’m drawn to–all which happens through self discovery and looking inward. So with that being said, tied throughout the record are songs that really identify who I am and what I want to tell the world.

“Messy” is a song that sheds some light on the imperfection of all of our lives and touches topics from body image to drug abuse. “Forgive Me” takes a stab at mental health awareness and what it means to be real in the midst of a world controlled by social media. And “Old Souls” was one that shared my views on our awful dating culture and where I stand with what I believe and value.

We wondered if you could take us through your songwriting process. Do you tend to deal with the lyrics first, or the music?

Depends. If I’m writing alone with an instrument, I tend to start making up a melody and lyrics simultaneously almost. Lyrics typically come second because i’ll go back in and hone in on them but it varies. Sometimes I start with the verse and work my way down the song especially if I don’t really know what the hook is yet, other times I’ll get the chorus first and go backwards!

If i’m writing with other people sometimes I’ll start a melody and bring it in to the session and we will work an idea around it. Other times, I’ll come in with a concept, title, some lyrics and we will form the song from there.

The effects of COVID-19 have without a doubt had a major impact on the music community with live shows completely stopped. As a result, virtual performances and even festivals have begun to take form. Having hosted a few yourself, could you tell us your thoughts on this new norm?

I am beyond grateful to have a platform to perform on ! Playing for your fans is so rewarding on all levels, it makes the songs have a place to live and at the same time brings me so much fulfillment. Of course, I miss the face to face interactions with people more than anything, but am very thankful to have another outlet. Plus, it allows me to test out a new song I had just written or something that I would probably be too chicken to whip out at an actual show!

And when artists are able to get back out on the road properly, do you have any plans to celebrate your debut album by touring?

I have a couple opportunities up my sleeve that are in the works, so praying those pan out! But yes, I am antsy to get shows booked as soon as possible. I miss it SO much.

We have loved speaking to you today and we adore ‘Everywhere I Go’. Do you have any parting words for our readers?

Thank you for having me!!! To all you readers, thank you for making it to the end of this interview, you’re a trooper. But more importantly, I’d love to chat with you guys! Shoot me a text to get all the latest music (# in IG bio!) or DM. Also if you dig the tunes, please keep adding to your playlists, sharing with friends and fam–it means the WHOLE WORLD!

You can follow Chloé Caroline now across social media:

Stream the entirety of ‘Everywhere I Go’ below: