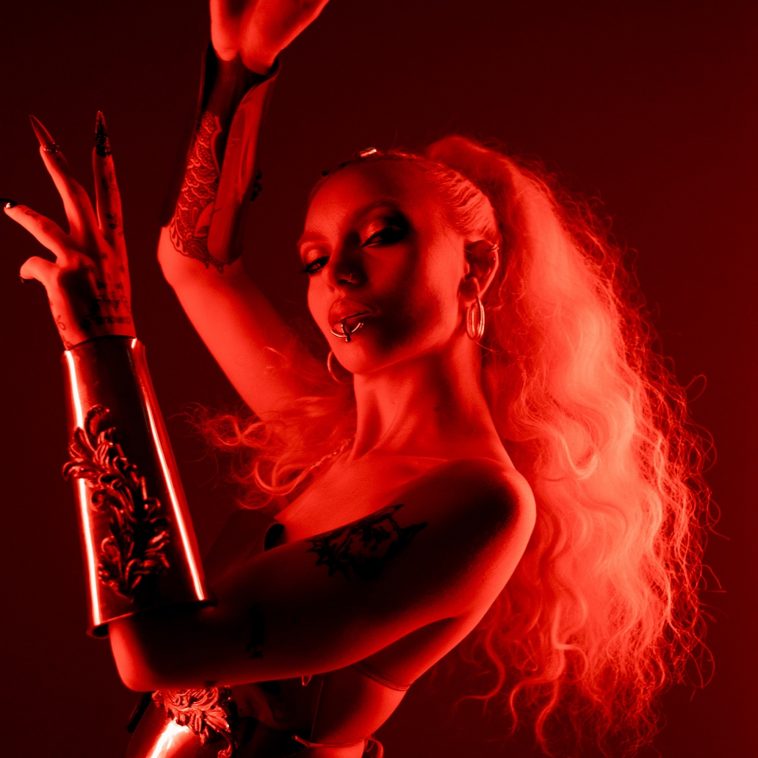 When British-Slovene singer/songwriter July Jones found herself betrayed by the person she believed she would one day marry, she had two choices… fall to pieces and become a victim circumstance, or retreat within, and look to find a way to channel all of the pain and anguish she felt deep in her heart, into a project that would emancipate her from the perils of sadness inflicted upon her by fate.

Never one to shy away from a challenge, Jones chose the latter…

“The worst thing about betrayal, is that it never comes from enemies.”

As a fearless and provocative recording artist, who is unapologetically extravert and wonderfully eccentric in both the music she makes and the styles she creates, July Jones comes out swinging on her latest single, Aladdin – an epic alt-pop, rock opera that tells the story of how the 22-year-old dealt with the internal conflict and loss of trust she felt, in the aftermath of the breakdown of a once meaningful and loving relationship.

“This is the most personal song I’ve ever put out.” Jones tells us over the phone as she takes a break from working on new music in a recording studio over in Finland. “The lyrics are very autobiographical and very direct, and tell quite a specific story which is something I’ve never really done before, because as a songwriter I tend to be quite metaphorical and sing about things that can be left open for people to interoperate in their own way. But with Aladdin… there’s no mistaking what this song is about (laughs). Yes, my fiancé really was texting a girl called Jasmine. And yes, I was pretty angry about it, in fact I cried throughout the entire day we recorded it, but I knew I had to fight through that to come out the other side a stronger person.”

With it’s confessional lyrics, seductive melody and slow brooding beat, pulsating over crashing strings and distorted electric guitar riffs, each element of the tracks dramatic production is effortlessly brought to life by July’s defiant, sassy, yet steely attitude. But despite the songs super emotive and painful subject matter, Jones remains very much in control of the narrative throughout, embracing and owning all of the raw emotions she experiences, whilst maintaining her sense of purpose and power.

“This whole song has influenced my songwriting in ways that I would have never imagined.” July admits. “And so moving forward I’m really excited about making music that I know my fans are going to be able to relate to.”

For any creative person who finds solace in self-reflection, and a sense of healing in their artistry, we wonder is July able to reconcile some sort of resolution after writing a song like Aladdin? “When I write songs, I kind of approach it like it’s just me scribbling my thoughts down in my journal.” Jones says as she explains her songwriting process. “It’s me letting everything out and expressing of all of my emotions – good and bad. Like for example the line in Aladdin that goes “fuck you Jasmine” – that’s quite threatening isn’t it? And honestly, I would never really say that in real life, but in that moment that’s what I needed to say, to release that feeling, so I could move on and not be angry and bitter anymore (laughs).”

Reflecting further, July adds: “When I really think about it like that, then yeah… I guess what I do in the studio, and the music I make really does provide me with a sense of healing. It feels amazing after you’ve written a song, to have this piece of art that you’re able to relate to and connect with to the point where it feels like such a part of you, because of what you’ve been through… it’s special.”

As we listen to Jones speak, it becomes abundantly clear just how much of a cathartic and therapeutic experience making music is for her, despite its challenges…

“I’ll admit, being in the studio can be incredibly draining and daunting, because sometimes you’re in there with people you’ve never met before, and you have to sit there and open up about your life to these total strangers, and you’re like “argh, oh my God this is so scary!” But once you get past that, and you start to get comfortable with the people you’re working with, they become a bit like family, and that’s when the good stuff comes out, and you’re able to create something really special that helps you to move on from something in your past that’s been hurting you or holding you back.”

“And you know, it can also work the other way too, where a producer might share something they’ve been going through, and then that inspires you to think of a time in your life where you might have felt the same and before you know it, you’re vibing and creating all of these songs. So it can be a brilliant way to express yourself and get all of your emotions out – it’s like therapy, but less expensive (laughs).”

“I cried throughout the entire day we recorded ‘Aladdin’, but I knew I had to fight through those emotions to come out the other side a stronger person.”

July on how she uses her art as a way to heal.

Aside from finding restorative healing in the recording studio, Jones also finds freedom in fashion, producing aesthetically pleasing promotional campaigns and music videos to accompany each of her musical releases.

“I’m really proud of the visuals that we’ve created for this song.” July says proudly of the highly stylised clip for Aladdin. “I worked with James Gallant and Laurie TB who are incredibly talented, and like me, they really believe it’s important to create striking, larger than life imagery to help enhance a song and bring it to life.”

“The visualiser for ‘Aladdin’ is a total extension of the song – I didn’t want to go too left-field or create a crazy concept that detracted from what it’s about lyrically, so we focused on the lighting, the camera angles, the props and the fashion.”

Clearly inspired by those that came before, Jones says she enjoys marrying together the worlds of music and fashion, in aspects of her life, not just in her work… “Fashion is a massive part of who I am, wherever I am. Like right now, I’m stood in the middle of the woods talking on the phone to you and I’m wearing latex (laughs). I love expressing myself through my clothes and I love that I get to do that in my music videos and in my stage performances.”

Known for her electric, high energy live shows and festival sets, it won’t be too long before fans can see the Butterflies singer perform her new material live…

In what promises to be the ultimate girl power party of the year, July Jones is set to join friend and collaborator GIRLI on tour this autumn, as the duo hit the road as part of Ricochet singers Damsel In Distress Tour.

Kicking off in Bristol at The Lanes on November 7th, before hitting towns and cities including Cardiff, Brighton, London and Manchester, the pair will wrap things up at the Arts Club Loft in Liverpool on December 3rd.

“This will be my first proper concert tour and I can’t tell you how excited I am to get out there!” Jones says with a squeal of joy. “I feel like it’s going to be the most incredible experience, because not only will I be on the road with GIRLI, who is a really dear friend of mine, but also because this will be the first time in a long time that people have been able to go out and enjoy live music!”

“For me, not being able to perform this past year has been so hard; it’s felt like a part of my identity has been stripped away and I’ve not felt like myself because of that. So I’m super excited to be back on stage, to see my fans in real life and just have fun! I feel like this tour is like the start of a new era for all of us and I cannot wait.”

So concerned about the Princess you forgot about the Queen…

Sometimes in the midst of our darkest hour, we somehow manage to muster the strength to break free from the shackles of our past, to find light and redemption on the other side of desperation and despair. This certainly seems to have been the case for July Jones, who instead of letting loved ones break her spirit, embarked upon an inspired journey of self discovery, that saw her liberate herself from heartbreak, to produce some of the most powerful and artistic music of her career so far.

“This project is my whole life! I’m putting everything into it and I want it to be huge.” Jones says of her relentless quest to achieve world domination. “This is me declaring who I am as an artist, and also who I am as a person too, because it’s important for me that people understand where I come from and what I represent.”

“As an immigrant, and as someone who has never felt like they belong anywhere, I want people to listen to my music and feel free to be whoever they want! I want them to feel strong enough to express whatever it is they are going through, and channel that emotion through me. And so I don’t want to follow the rules and make pop songs that stick to one formula or a traditional structure, because to me that’s boring and it’s be done time and time again. I want my songs to lead with emotion, because at the end of the day, music is supposed to make us feel something right? That’s the power of music.”

Let us know your thoughts on July Jones over on Twitter @CelebMix now!