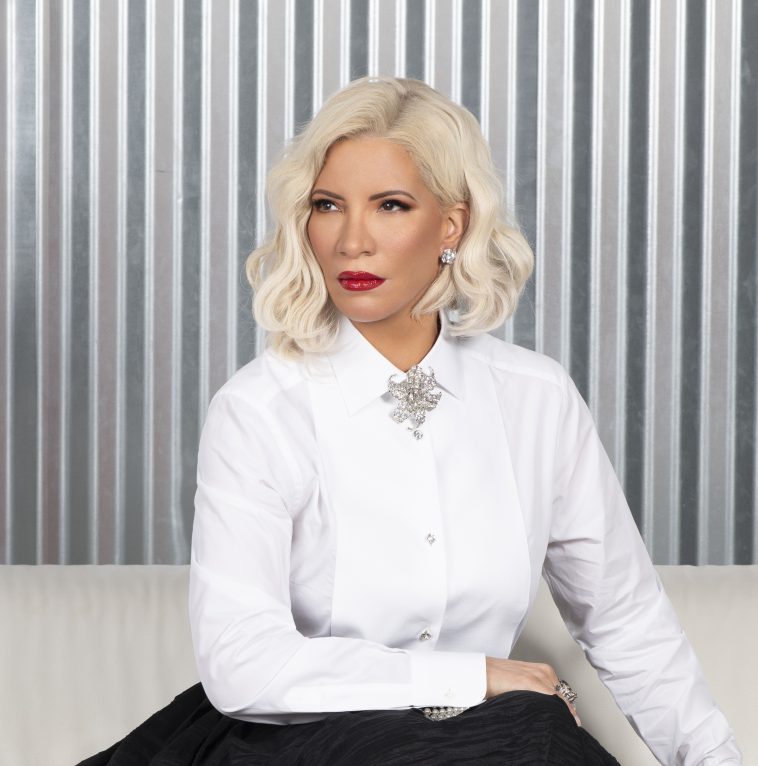 Rebecca King Crews, musically known as Regina Madre, is an actress, speaker, singer, songwriter, and above all, a strong woman. Regina has been through a lot in her life, but no matter how much she has had to overcome, she never lost her faith, her vision, her spirituality, or her marriage to the actor and activist, Terry Crews. Her resiliency continues to stay present in everything that she does and with every word that she sings in her latest single, “Never Be The Same.”

Although Regina is still newer to the music scene, music has always been a part of her. Growing up, she never stopped thinking about music, and refers to herself as a “walking soundtrack” because she knows a song to go with just about every situation she finds her or her family in.

“Never Be The Same,” is lyrically emotional and raw, with lyrics like, “I cried, like I never cried before / I died, like I’d never see the Lord,” and “You lied, and it cut me inside / Oh you lied, and you tried to cover and hide / Oh you tried.”

The lyrics were written at the lowest point of Regina’s relationship with her husband, on a dark night when it felt like her marriage wasn’t going to survive anymore. But being the fighter that she is, she refused to let that happen. She fought through her difficult childhood and her mid-life health crisis, and she fought the same way for the love of her life. And it WORKED. Regina’s relationship with her husband is now better than ever, which shows the power of true love and never giving up.

Although the animated video for “Never Be The Same” dramatizes the crisis that Regina faced in her marriage with Terry, it perfectly expresses the infidelity, jealousy, and rage that she felt at one point in her life. Beautiful yet dark, the video for “Never Be The Same” is an autobiographical statement that shows the world a part of Regina’s life.

We spoke to Regina and discussed “Never Be The Same”, the reason for her alto ego name, who she’d love to collab with for a song and open for on tour, the most important thing to keep a relationship going strong, her fans, and more.

What inspired you to get into making music? You have such a beautiful voice.

REGINA: First of all, thank you so very much! I never considered myself much of a singer per se, but as someone who writes music and sometimes sings. I began in music when I was just a little girl, and my parents were both musicians and singers. I started piano at age 9, and all the way up until the day I got married, I sang and performed in various choirs, bands, and musical theatre productions. I also served in local churches as a singer, songwriter, pianist, and choir director.

Music has been a part of my life as long as I can remember. After I met my fabulous husband (LOL), I went on a journey with him to help him pursue his dreams, and raised two small children. I was quite content. That all changed the day I tuned 40. I woke up and a still, small voice said to me: “It’s time.” I felt it was time for me to use my talents to not just help other people, but to give way to my own childhood dreams of becoming an entertainer. I built a studio and began working with producers, culminating and releasing my first single, “Can I Stay.”

What was the reason you decided to perform as Regina Madre instead of Rebecca King Crews?

REGINA: I released two singles as Rebecca Crews, and though they did fairly decently for an independent artist, I felt that I was getting prejudicial treatment because I was older than most singers who were just starting out, especially in regards to radio. I took a page from the notebook of several different artists, Donald Glover, Gabby Wilson, and many others who changed their name and even hid their appearance so that people would judge the music on it’s own merit, without their preconceived ideas about who they were as people.

Donald Glover was an actor, and Gabby, although she was a musician, had been a child star, and her new grown up sexy music was hard for people to hear. So, she became known as the artist H.E.R.  to allow people to simply judge the music and nothing else. When I went behind the curtain of Regina Madre, I got my first two radio singles, not even the radio promoters knew that it was me.

Was it difficult to come up with a name for your alter ego?

REGINA: A little bit. I wanted something that used the letter R, and I also wanted a name that had some quality of regality and universal womanhood. I began to look up names in other languages that meant “queen.” I remembered that my children (all taking Spanish class) habitually call me “madre.” Thus, REGINA MADRE was born.

Your newest song, “Never Be The Same,” is all about staying strong and keeping your poise amid troubles. What do you hope people feel after listening to it?

REGINA: First of all, I hope that cheaters who cheat will think about the pain they caused other people and mend their ways. But really, it’s about the way in which betrayal changes us for good. I can find no better imagery than that of the werewolf to convey the way the human heart morphs into something other than human with that kind of pain. It’s reminiscent of a scene that I watched in the Broadway musical Wicked when Elphaba has had enough.

She sings “no good deed goes unpunished,” because despite all of her best efforts, evil still came to her home. I related to the temptation to become someone that I was not during this very dark time in our life. The wounding of the wolf was just another metaphor for the way we wound each other with our actions. It is truly like a bullet to the heart.

REGINA: It would have to be the bridge. “You showed me your dark, baby / Now I’ve got a jade heart, and I loathe you, but I can’t tell you goodbye.” It’s my favorite line because it shows how closely love and hate are connected. No one can hurt you unless you love them. The proportion of pain is directly linked to the power of your love.

The animated music video for the track resembles the wolf (jealousy/rage) that you feel is inside you at times. What do you do to help avoid provoking that part of you?

REGINA: I realize that another person’s actions have nothing to do with me. Whether good or bad, I’m still a victim, not a precursor to your choice. Thus, I free myself from any expectation or any blame. Should there be any choices in the future that would affect the union, I can walk away knowing that I’m a good person, regardless of what you did to me. Jealousy is intrinsically linked to insecurity. If you are jealous without any proof of reason, that is your own battle. However when there’s proof, it’s no longer jealousy, it’s justified anger at a promise broken.

“Never Be The Same” is such a dark yet beautiful and powerful track of a woman’s strength to forgive someone who hurt her. What do you feel is the most important thing to keep a relationship going strong?

REGINA: Transparency. There’s no such thing as a secret sin. It is written: what is done in the dark will be revealed in the light, and you best believe it!

Do you feel like you’ve grown stronger as a person, compared to the time that you wrote the song?

REGINA: Absolutely. I wrote this song about three years into our reconciliation. For the first two years, I couldn’t even put words to the pain I felt. There were no words, just a melody that I played on the piano over and over again. As we healed, I was able to find the strength to actually talk about what I went through.

What is one of the most rewarding comments that you’ve gotten from a fan who listened to track, or your music in general?

REGINA: I can’t think of a specific one. But the ones that mean the most to me are the ones from people who’ve identified with the struggle that I was going through when I wrote the song. It’s as if my melody gave voice to their pain and caused them to feel that they were not alone in the world.

If you could collab with another artist for a song, who would it be and why?

REGINA: My favorite answer to this question is usually Sade. But in my knowledge of her, she does not do collaborations. However, she reluctantly allows people to do remixes of her songs. I would love to open for her. That would be a dream come true.

If you could explain a Regina Madre album to people in 3 words, what would they be?

With a mission is to utilize film, music, and television to entertain, inspire and motivate people in the world, we can’t wait to hear what other songs Regina releases in the future.

Watch the music video for “Never Be The Same” below:

Did you love the song and music video for “Never Be The Same”?