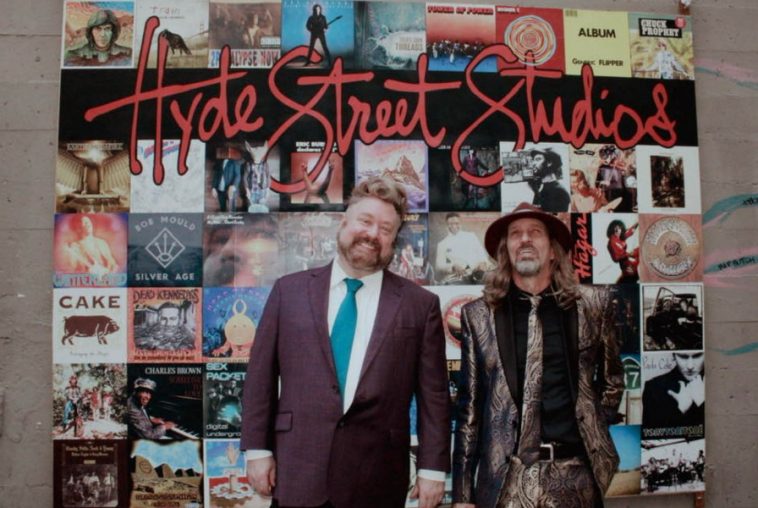 “Maison” was written to Kevin’s son, who during the lockdown struggled with not seeing his friends and the disruption of his normal routine and activities. The lyrics encourage him to realize the episode will pass, and all will be well – relevant advice for anyone feeling burdened by life’s problems.

“Each light on the highway leads you home / Each siren can call you to a shipwreck of your own / Each breath is slowing down your tide / Each left or right is drawing wrinkles in your mind.”

The video depicts a party the duo threw for family and friends – simply for the sheer joy of person-to-person connection.

CelebMix spoke with Kevin Seal to discover more about “Maison,” the upcoming album, and how Seal Party’s luscious sound evolved.

Where and when did Seal Party form?

It began on accident, really. The two of us began hosting recording sessions at the HydeOut in San Francisco during the spring of 2020. Each time, we’d invite different friends to join us, and each one felt like a party – and much like a party, each session had the distinct flavor of those particular people in attendance. Over the course of two years, we managed to host 23 amazing musicians in a variety of combinations, and it all coalesced into this debut album, MMXXII.

My son was in fourth grade during the school-from-home part of the pandemic. And it was crushing him to not see his friends every day, to not have recess with them. He’s an only child, and we don’t have other kids his age in the neighborhood. So these lyrics came out as a piece of advice to him, to keep his head up and his hopes up while the situation was looking dire. Are those streetlights blinding us, or are they helping us find our way home? Your choice. You can control how you want to set your brain and your heart.

Ben Torres shot the video with his two terrific kids on the other cameras. The approach was my idea, so he insisted on calling me co-director, but really, he did all the work. He edited it all too. We shot it in the HydeOut – the exact room where we recorded all of our tracks for the album. That room has so much history. It’s where Herbie Hancock, the Grateful Dead, and the Dead Kennedys all recorded some of their best-loved albums. It used to be called Wally Heider Studios up until 1980. The walls are just dripping with the goo of legendary music making.

You will release your debut album, MMXXII, on August 5. What can you share about the album?

We want the album to be a salve. We want to make people feel good when they hear it. We were amazed at how cohesive the whole 44 minutes of MMXXII felt, particularly since there are so many different musicians on every song. But there’s a real payoff if you stay on the ride for the full 44 minutes.

McGrew and I have been session players for years. We’ve played on tons of other people’s records and have toured in other people’s bands. And we’ve loved it, but it was time to spend some time developing our own ideas. Since we’ve spent so long in the studio helping other songwriters flesh out their concepts, we’ve gotten to play a wild mix of styles – punk, country, metal, soul, chamber pop, crooner jazz – and I think that omnivorous approach shaped the way we write and produce together. No genre is off-limits.

The glorious Midwest, originally. McGrew is from Illinois – his first half in rural Danville, and the second half in a Chicago high-rise – and I’m from Porkopolis, aka Cincinnati. We’re about to play a ten-date run of shows in the Midwest, actually. Indianapolis, Bloomington, Kenosha, Downers Grove, all over. That’s in July.

Our hometowns impacted not only our sound but our personalities and our style of collaboration. For me, being from Cincy, we were halfway between Motown and Nashville. That’s why Cincinnati brought us Bootsy Collins, Adrian Belew, and The Isley Brothers – there’s this unusual tension of bluegrass and soul and funk and garage rock all pushing and pulling at each other along I-75.

I’d say some of my phrasing ideas for singing came from listening to Daryl Hall and Steve Winwood and Michael McDonald and guys like that. I always loved that blue-eyed soul style of mixing Motown with some British Invasion sounds. And I love those thick, extended harmonies you get from slash chords. All three of those guys would always choose such interesting chord combinations. I loved the kind of flavors those unusual chords would bring.

Did Seal Party’s sound evolve naturally, or did you deliberately push it in a certain direction?

We were intentional about it. We’d make choices that would lean more toward soul than hard rock. It was very deliberate in terms of what musicians we’d invite, too. Some of these players are leading lights in modern soul music – Chris Rob, Keyon Harrold, Kenneth Whalum, Rich Armstrong, and Isaiah Sharkey. Their feel is incredible, and it added so much to these tracks. We were lucky that they were up for coming to our party.

McGrew and I both pay a lot of attention to what’s happening in the news, and that filters into our writing. Many of our songs are character-based, and some we write from the point-of-view of another person. I’d say movies inspire us as well – both documentaries and fiction.

We tend to start with the chords. We’re trying to find something we haven’t heard before with the voicings, or with the way the chords move. That’s partly why some of these musicians from the jazz world felt comfortable during these sessions, and fit right in because the chords were meaty.

It’s a busy summer! We’re playing in San Francisco on June 30, then off to Chicago for ten dates in the Midwest, then back to play Sweetwater in Mill Valley on August 27. Meanwhile, we’re already recording the next album. But MMXXII will be out on CD – only at our shows – on June 30, and then it comes out digitally on August 5. We’ll have vinyl, too, but that will probably take a while longer. I cannot wait for people to hear this record. It’s far and away the best-sounding recording I’ve ever worked on, and the best songs McGrew and I have ever written.