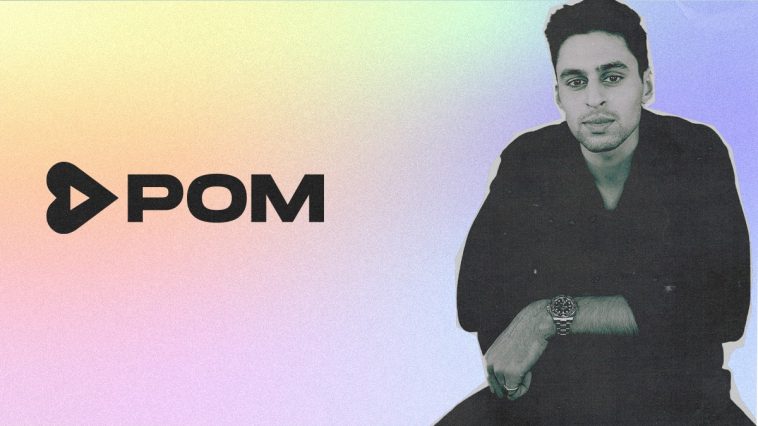 As the founder of dating app POM, entrepreneur Vihan Patel finds himself on a mission to rewrite the rules when it comes to online dating!

Prompted by his time hosting club nights in the city, Vihan saw that the music we listen to has a fundamental impact on who we are, from what we wear, drink and who we spend our time with. This led Cardiff University graduate to be inspired to think about creating an app that utilises the power of music to help bring people together. He quickly secured private investment and the idea for POM was born.

Unlike other existing dating apps, POM focuses solely on its users forging genuine and real connections with potential new partners, based upon their shared music tastes and by seeing a person’s true, emotional profile instead of a series of face-tuned photos and misleading bios.

Initially limited to 25,000 people, users can download the dating app now from www.discoverpom.com and secure a spot in the queue.

To celebrate the app’s launch we caught up with Vihan to talk all things dating, finding love and the Power Of Music!

Congratulations on the launch of POM! We imagine it’s been quite the journey to get where you are today – how are you feeling now the app is out and available for people to use?

Honestly, I’m super excited to finally have the product out. It’s been in the making for almost two years and with the pandemic various launch dates have been pushed back. So I’m super excited to get the app in people’s hands and shake up dating for good. The past 4 days have been sleepless, however, can’t wait to hear what people think…

It’s one thing to have an idea, but a whole other thing to bring that idea to life, how have you found the whole process of building something from the ground up?

Both incredible, and scary! Seeing the product turn from a couple scribbles in my notepad to an actual app on my phone has been such an incredible feeling. Similarly, seeing the team grow from just me, to now 7 people is amazing. Having other people get behind POM has been amazing too. There has been hiccups, of course along the way. However, it has been a brilliant learning curve.

Can you remember your original idea for the app? And how, if at all, has that initial concept changed and developed over the course of time?

POM’s purpose has always been to connect people through music. The vision never changed.

For anybody being introduced to POM for the first time, how would you best describe it and why should they sign up to use it?

POM is a dating app which matches you on emotion using the music you love. “Music is the vehicle, feelings are the GPS, love is the destination, and POM’s the chauffeur”

It’s clear you have a really good understanding of people, and that you’ve put an awful lot of thought into this project – we love how you’ve taken into account the possibility that not everybody will be up front and 100% honest about who their favourite musical artists, for fear of not looking cool so you’ll be using a special algorithm that will analyse people’s overall music consumption. Did you do a lot of market research or create any focus groups to help align your vision with the needs of your intended audience? And if so, how did that go?

Yes, we spent months asking people, bringing people together through physical events and seeing how compatible they were. It has been one of the most exciting parts of starting POM, just getting in front of people. Early doors we actually emailed the entire POM mailing list (17,000) at the time and I personally asked for a 15 minute meeting with them to try and get their opinion on POM and what they want to see. That was probably the most important piece of research we ever did. Asking our customer what THEY wanted to see.

Nowadays it seems that a lot of people are afraid to use dating apps, mainly due to the fact that so many of them seem to primarily focus on the way a person looks, rather than who they are as a person. Your app really helps to shift the focus away from all of that superficial stuff, and allows people to make more authentic, tangible connections through the joy of music. How important is it for you, to strip back all of the smoke and mirrors (and FaceTuned selfies), and provide people with a realistic chance / opportunity at finding love?

I think it’s incredibly important, I think we are past the days of relying on superficial metrics to find our partners. The most important thing we should be focusing on is emotional compatibility. Understanding who someone is emotionally is something that will bond people for life. Looks fade.

What has the feedback been like from users so far?

Incredible, we’ve had a few teething issues but plenty of matches made already!

As music plays such a prominent role in the inner-workings of the app, we wonder, how would you best describe your own relationship with music?

Which genres / styles and artists do you enjoy listening to?

I have a very eclectic mix of music. I love vocal heavy songs for my day to day music (Dean Lewis, Kina, Dan Owen, Hannah Grace).

If you were heading out to a concert on your first date with a new potential partner, who would you choose to go see perform live?

I would have to say Billy Lockett.

How do you see POM developing / evolving in the future?

Let us know your thoughts on POM over on Twitter @CelebMix now!