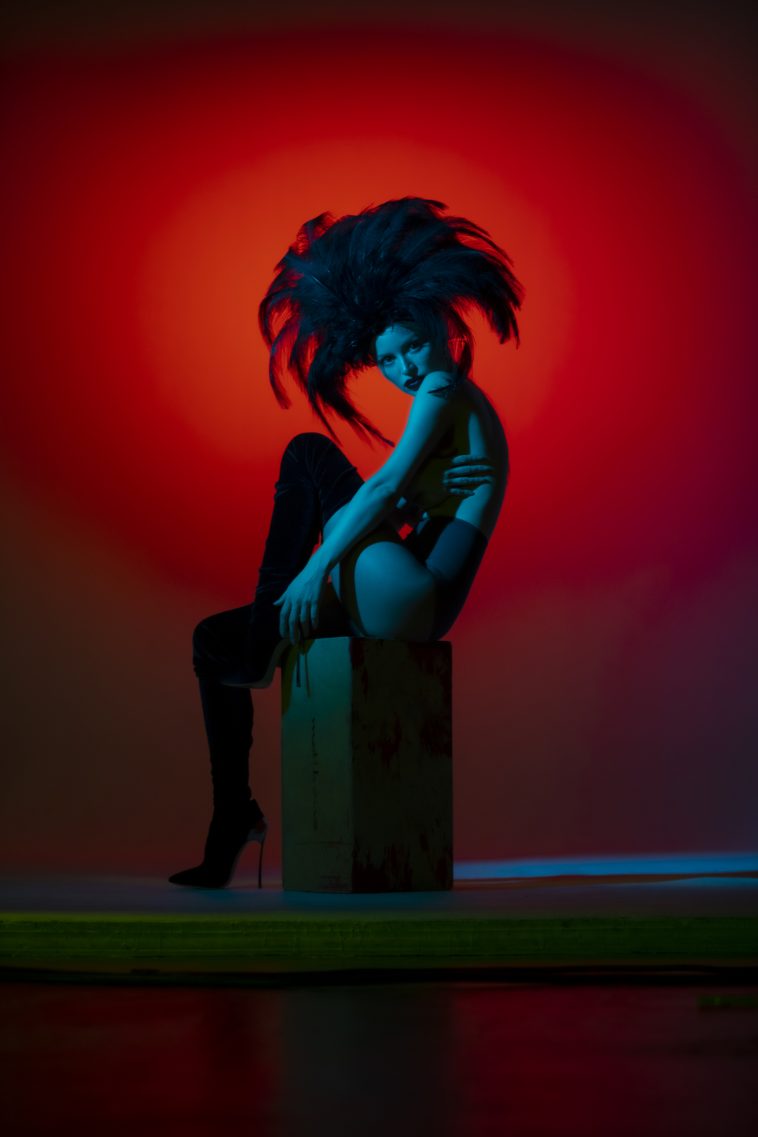 Daring dark pop diva Xhoana X draws in listeners with her seductive synth-driven sound. Heating things up with her wicked, dusky pop, the singer releases her evocative new album The Villain. This intimate release touches on themes of love, loss and our inner dark side. Blending unique components of trip-hop and haunting electronic, Xhoana X’s offering will grip you at your core. With glossy vocals and eerie melodies, each track takes you on an intense ride of pure sultry melancholia.

Xhoana X grew up in both Los Angeles and The Bronx, moving to the U.S. from post-communist Tirana where she was born. This unique upbringing provided her with the strength and power she possesses today. Creating a glamorous femme fatale image, there is a playful passion and rich elegancy within her craft. CelebMix spoke with Xhoana X discussing her album’s meaning, villains that inspire her and more.

You titled your seven-track release The Villain, which is perfectly fitting for an album so intense and sinister. What inspired this dark and haunting offering?

Sinister? Is It? It’s so interesting to hear how it’s perceived in different ways.. apart from ‘Deepest Pleasure’ (the latest single released from it) which is definitely sinister, the rest of the EP is more visceral in an emotional, vulnerable and melancholy way. All the songs came organically as in; I didn’t set out to write a record called THE VILLAIN.. The Producers (Jim Kaufman, Joey Ariemma) and myself just got together and started writing. We wrote ‘Endless Crime’ in 30 min. By the 3rd or fourth writing session we had ‘Deepest Pleasure’ and the title track too I think, so the concept of the EP started coming together fast. A lot of the record deals with relationships and loss (Not just romantic, but platonic, family and the relationship with self and our internal darker side). Sometimes you end up the villain in someone’s story.. sometimes you were. But in the ep the subject isn’t black or white. I wanted it to come off real even when sometimes it comes off fucked up. It’s funny looking back because when I was writing it, I was in a happy place in my life and my relationships (romantic and otherwise) though you wouldn’t think so listening to the record. I guess as I always say: when I’m happy I write sad music and when I’m sad I write ‘bad bitch’ music. Somehow THE VILLAIN is both.

In your album, you display elements of deep trip-hop and dark pop. How did you develop your unique musical style?

I’ve always been obsessed with Massive Attack, Portishead, NIN etc. My producer Jim is the same way so you can definitely hear both our auditory influences in THE VILLAIN.

Your playful track “Deepest Pleasure” exudes seductive, psycho killer vibes. Can you tell us more about the meaning behind this thrilling tune?

When I first heard the track in the studio, I was like: This is sick.. The song needs to be sick AF too. I saw Harley Quinn and the Joker aesthetic in my head so I ran with it.. A psycho alter ego of ‘Fuck You’ I do what I want and if you get in my way I got fun plans for you.. type of energy. I skimmed through Jim’s ‘Serial Killer’ mags in the studio too for extra inspiration. Character driven songs are extremely fun to write, and I’ve never been afraid of my own dark side. Can’t truly know yourself without it.

Your title track is a sultry song about not hesitating to go after what you want, no matter the cost. Are there any villains from movies or TV shows that really inspire you?

Again very interesting that it’s perceived this way. I love it. But, the title track (Villain) is about a toxic relationship where you both know how fucked up you are but still keep going. I guess we’ve all had that. I wrote it from the point of view of the partner who owns up how they’re fucked up, at least. A lot of songs go with the blame game.. which is also valid. I liked going slightly psychological in the lyrics. If I’m gonna be “THE VILLAIN” I’m gonna own it, but at least I’ll make the imagery poetic. Villains that inspire me.. Hmm.. Amy Dunne in Gone Girl, The Joker, Harley Quinn, Pablo Escobar in Narcos, Daenerys in GOT.. I’m probably forgetting so many more.

Speaking of villains, they are known to be quite vengeful, what draws you to that idea and do you ever find yourself feeling that way?

Personally speaking I’m not good at being or playing the victim. My personality just doesn’t kneel. You see it in my eyes right away. They are ready to fight back. That being said everyone has a dark side whether we like it or not.. whether we accept it or not. I’ll accept being seen as a villain over a victim. No one will ever believe me to be a victim and I’m fine with that. Have I ever felt vengeful? Yes. Have I acted on it? Yes, in the past. Now I know better than to waste time on that kind of energy. Hearing about karma collecting is so much better.. and karma is always collecting.

Growing up partially in Los Angeles, and a teen in The Bronx, having moved from post-communist Tirana, can you explain what that was like and how it has influenced your sound?

I feel like every time I say something about being born and raised in a post-communist (1/3 muslim) South Eastern European country I’m met with: “what the fuck are you talking about?”.. but if you’ve been paying attention to the news; a lot of things like that went on that I still remember from childhood: Protests, riots etc. Back then people wanted the right to vote for the inclusion of a democratic party, as Albania was socialist. What’s happening in the states now is quite the opposite. I guess I couldn’t really answer this without mentioning current events. I moved to the states as an immigrant (my mother won the “green-card lottery” in ’95 when I was a child). Apart from all the trauma linked to leaving all I knew behind.. musically I’ve been exposed to so much more than I would have been exposed to if I hadn’t moved around. When I came here in ’96 there was Tupac, Biggie & No doubt and then Prodigy and Radiohead so just massive nonstop inspiration which I’m massively grateful for. I think you hear it all in my music.. the attitude, the rebellion, the nostalgia, the vulnerability, the eclecticism.

Lastly, who are some artists on your current playlist that you really enjoy?

I’m loving my fellow Albanian Gashi’s new record. Fousheé, Plaza, Swing, Kali Uchis, and love the LDR that came out the same day as my EP, THE VILLAIN (January 11th).