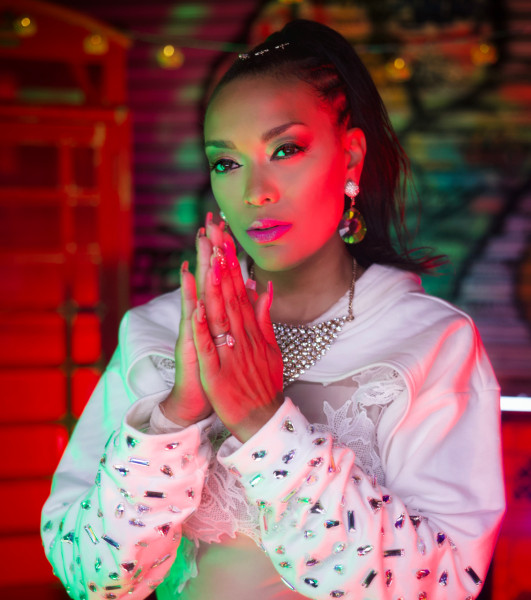 The song’s lyrics, like the music, palpitate with the sensation of mobile seduction:

“Hands up high then drop it down, roll it round slowly / Wine it gal, up and back let me break it down / Prove it to me baby show me now.”

Ja’Shayla’s sound amalgamates pop, R&B, reggaeton, and hip-hop into alluring, vibrant sonic concoctions guaranteed to get listeners up and grooving to the music.

Produced by Victorious Universe, directed by Joshua Ramirez, and choreographed by Janet Huey, the video depicts six enchanting dancers moving in front of neon lights, portraying the heady, mesmerizing dynamics of a posh nightclub, where the focus is on Ja’Shayla, whose on-screen presence is palpable.

Self-trained as a singer-songwriter, Ja’Shayla has performed for more than 100 million viewers around the world, along with appearing on networks such as Univision, Bravo TV, BET, and MTV, as well as performing on prominent stages, including Madison Square Garden and the Hammerstein Ballroom.

Ja’Shayla began writing early on at the age of seven, followed by recording when she was 13 years old. Expanding her talents, she became skilled at the art of engineering not only her own recordings but those of other artists.

Her songwriting gift makes her an in-demand composer for artists like Ramosaj from Dancing with the Stars Albania.

Glowing backing harmonies give the tune creamy tantalizing tones as Ja’Shayla uses her deluxe and lush tones to infuse the song with tantalizing sprays of suggestive tones. Her phrasing and flow inject the tune with dazzling timbres and inflections.

Brimming with irresistible rhythmic pulsations, “Body Roll” parades the amazing voice and dancing talent of Ja’Shayla. This song is red-hot.