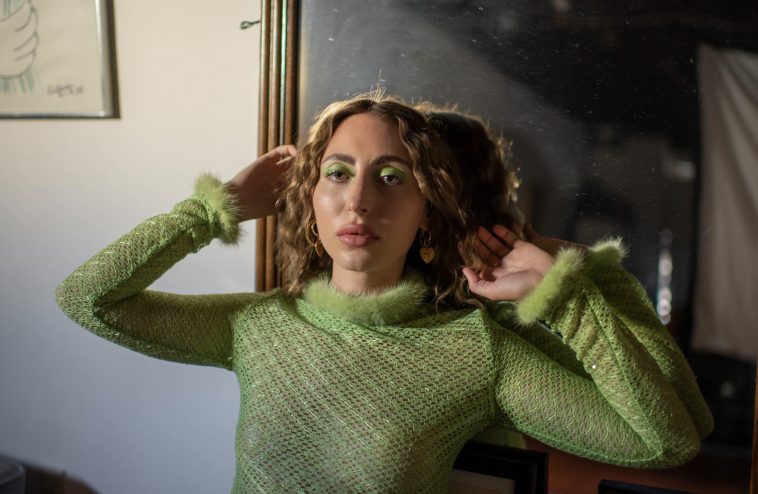 Jazzie Young has released the contemplative ‘spaghetti stains‘, the second single off her upcoming debut EP, which follows on from the enrapturing, ‘Lost‘.

As the young artist prepares for the release of her debut project, CelebMix caught up with Jazzie to get more of an insight into what to expect.

‘spaghetti stains’ is your latest single and the second to be taken off your upcoming debut EP. Talk us through the relevance of the title to the lyrics.

The title of the track was taken, from the first line in the song: “spaghetti stains on my sweatshirt.” I thought that those first few words encapsulated the meaning of the song perfectly — the idea of wearing the same stained sweatshirt for days because you are just too tired and overwhelmed to take it off or wash it. I think anyone who has been experiencing those kinds of emotions throughout their life, can relate to that experience. The imagery of that felt spot-on for the experience I was trying to convey.

And you wrote the song as you were beginning to notice those around you, who do not usually suffer from mental health issues, having difficulty with depression as a result of the current situation. How might this song offer some guidance?

I am not sure how much guidance it can offer, because everyone has their own experience, but I just wanted anyone who was feeling bad to know that they are not alone and that they can get through it. When you are in a depressive cycle, it can be hard to see a way out of it. It can feel hopeless. So, I just wanted there to be a kind of recognition like I see you and I understand, and we will get through this. You will not feel like this forever.

You openly suffer from anxiety and depression. How has music helped you deal with your mental health?

Songwriting was the first way I learned how to express myself. I am a person who internalizes my emotions, and I have had a lot of trouble communicating myself to the people around me, especially during heightened emotional states. Sometimes, I do not know how I truly feel about a situation until I write a song about it and then there is a bit of an aha moment where I am like yes! That is, what I was feeling! It has helped me process my experiences and understand myself better.

Rumour has it that it is no coincidence you began releasing music during one of the most turbulent political times in modern history, given that your father and the rest of The Youngbloods are responsible for the famous peace anthem, Get Together. What would you say to that?

I do not consider my songs to be directly political. I think they deal more with the emotional side of things. So, I guess it is a bit more indirect. There has been a lot of turmoil during this time. My reaction has been to go inward and create something in response to everything I have been feeling.

So what is your main driving force when it comes to pursuing music as a career?

I was always a bit scared to pursue my passion for music. I struggle a lot with performance anxiety, and the idea of singing such personal songs in front of a bunch of people made me very nervous. But I think I just realized that there is nothing I love more in this world than writing songs and that I have to push through the fear. In the end, anything you choose to do in this life will be hard and have challenges, so I might as well do the thing I have loved since I was three-years-old.

You recorded the EP in the studio that your father built in the 70s. How did it feel when you were within those four walls recording your music? Did you feel any pressure?

It felt like home. I was honestly the most at ease I have ever been recording music. The way the studio is set-up is just really welcoming. I also got to have my brother, Ethan Turner, record all of the songs and I think that added to the comfort level. He has known me since I was a little girl shouting out songs that my father has written, from the crowd at his concerts, so it was a pretty special moment for us both. As for the pressure, I think a lot of that mainly comes from myself. I am a bit of a perfectionist and can be pretty critical of myself, especially when it comes to my art. I try my best not to let that get in the way too much!

What do the songs on this EP tell us about you as a person, and as an artist?

All of the songs on the EP were written and recorded within the past year. So I look at it as a time capsule of sorts. It represents who I am and what I have been through this past year; my doubts and confusion on where I fit in, and the different relationships that I have experienced. It is a collection of songs about growth and change and the pain and discovery that comes with that. I think it captures a lot of the different aspects of my personality and gives a glimpse into what is to come, for me as an artist.

For the latest on Jazzie Young:

Are you loving ‘spaghetti stains’? Let us know on Twitter @CelebMix!