Over the past few years it seemed as though people have been focusing on the wrong thing regarding the chart-topping artist Justin Bieber. Unless you’ve spent your time under a huge rock in 2013, you’ve probably noticed that everybody was writing about him getting into trouble time and time again. What you (and just about half of world) probably overlooked is Justin’s interest into helping others and doing as much as he can to give back.

You’re already familiar with the scandals, so we’ll keep them out of this article.

Over the past few weeks I’ve found myself defending Bieber (despite not being a Belieber, but a human being who actually respects him) against anyone who had anything bad to say about him. While everybody is familiar with the various incidents he’s previously had, no one seems to take notice of the good side of him. Why is that? Probably because acts of kindness don’t sell well in the media. Because raising $3 million to help victims of a typhoon doesn’t sell as well as throwing eggs at a house.

Time and time again Justin has proven to everybody just what a decent and respectful human being he is, unlike everybody who hates on him for no valid reason. 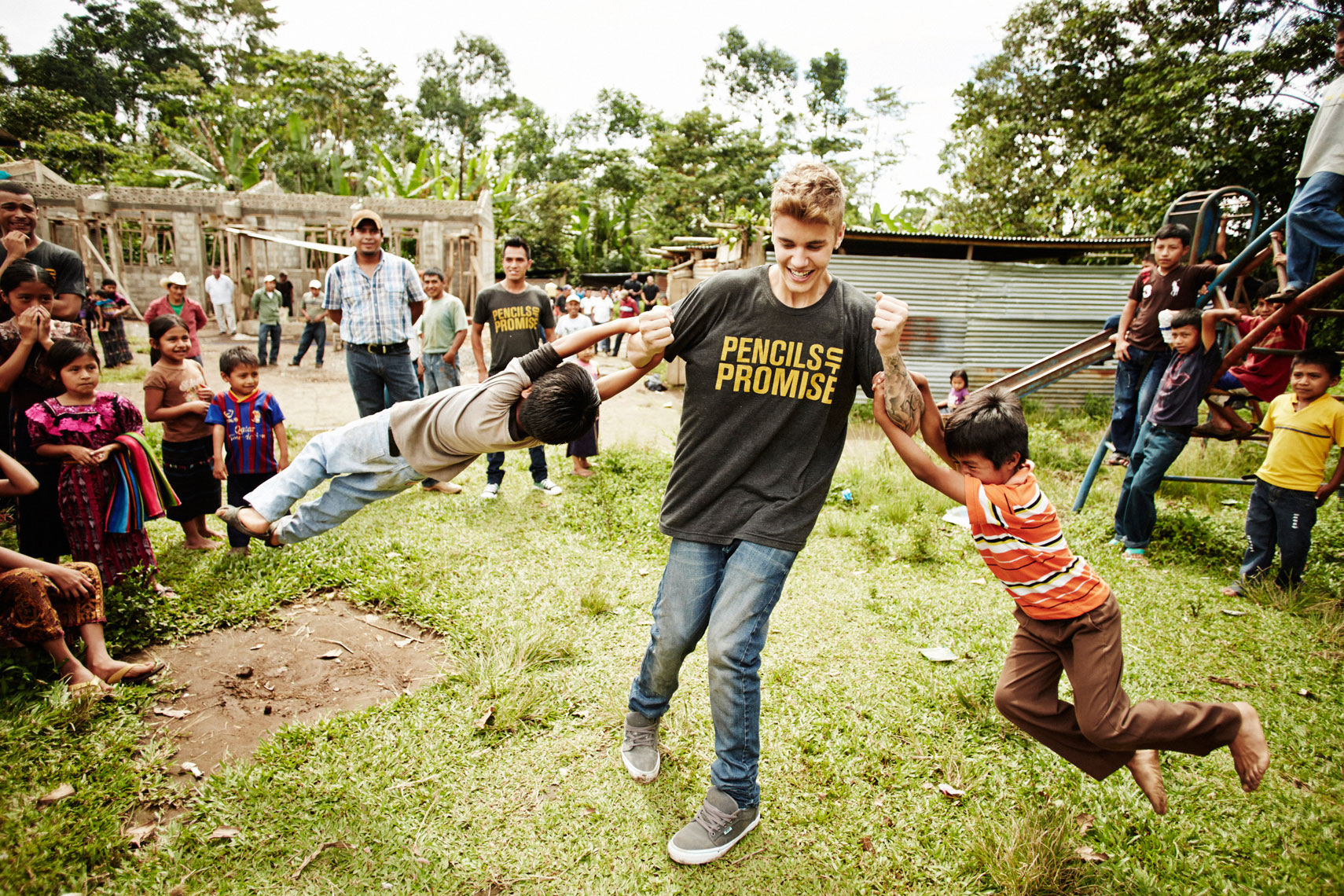 I got to talking with my friends a few days ago and I brought up him stopping his concert in Turkey to honor the Muslim prayer call- Azan. By doing that he has gotten a lot of respect from Muslims and other religions worldwide, thanking him for doing something that most Muslim performers don’t even do during concerts. My friend’s response to all of this? “Yeah, but he did it for publicity”

Apparently, everything Justin does is solely done for publicity. God forbid he did it out of respect for the thousands of Muslim fans that attended the concert, or the millions of Muslims worldwide.

The thing is though, he had absolutely no need whatsoever to do that. Just like he has no need to help others, to raise awareness to certain foundations, or to help the victims of natural disasters as much as he can. Just as few people notice his good deeds, even less people would notice his lack of good deeds. You won’t hear anyone say “Oh, Justin Bieber didn’t help build a school in Guatemala! What a d-bag”. So yes, while doing these charity actions or good deeds, he does raise his publicity by just a tiny bit (although not much in the general eye), it wouldn’t hurt his image at all if he didn’t do anything.

I could honestly write novels on how many times Justin has helped the world and how blessed the same ungrateful world is to have him, but let’s talk about Justin himself.

People seem to forget that he was quite literally thrown into this mess of a music industry at an extremely early age of fifteen. This is the year everyone is starting to discover who they are and where they see themselves in the future. Justin’s future was handed to him, and it wasn’t a pretty one. Sure, we all see the highlights of fame, but what nobody pays attention to is something Justin just recently talked about in an interview with NME.

“I just want people to know I’m human. I’m struggling just to get through the days. I think a lot of people are. You get lonely, you know, when you’re on the road. People see the glam and the amazing stuff, but they don’t know the other side. This life can rip you apart. I watched the Amy Winehouse documentary [Amy] on the plane and I had tears in my eyes because I could see what the media was doing to her, how they were treating her. People thought it was funny to poke her when she was at rock bottom, to keep pushing her down until she had no more of herself. And that’s what they were trying to do to me.”

It couldn’t have been easy on the young Bieber to completely change his lifestyle. Many other fifteen year old’s would have snapped under the pressure of constantly being under the public eye, having to deal with huge amounts of fans and paparazzi, preforming in front of hundreds of people, constantly travelling to unknown and unfamiliar places, and trying to please everybody.

But for the longest time Justin has managed to keep it together and get the job done. And no one gives him any credit for doing so.

Also something that people seem to overlook is Justin’s relationship with his loyal fans- his Beliebers. Their bond is beyond any other in the business, with Beliebers constantly sticking up for their idol, supporting him through thick and thin, and their love doesn’t go unnoticed. Justin has never kept quiet about the amount of support he receives on a daily basis, and he’s never skipped on a chance to show his gratitude. It’s an amazing thing to be part of any fandom, but many artists won’t show as much love for their fans as Justin does. How can he not though? When the whole world turns against him, he knows he still has a faithful fandom to turn to. A fandom that knows him for who he is, a fandom that doesn’t buy the media talk, a fandom that is willing to fight off millions of people just to prove that their idol is worthy of everything he gets. And he is doing an amazing job at giving back to the fans. He gives 110% of himself on stage every time, he constantly interacts with fans via social media, he hardly ever says ‘no’ when asked for a picture or an autograph, and he is always surprising fans at the most random occasions.

Sadly, it’s not always the support that Justin gets. We all know how hated he is in the world, but the hate is based on irrelevant things, such as his old haircut, his old songs, and his old self. Sure, his old self has made plenty of mistakes, but at the same time he has done so much good for the world that people shouldn’t really hold a grudge.

In many eyes he is either the preteen boy flicking his long hair and singing “Baby, baby ohhhh”, or the rebellious wannabe rapper, but what he should be is a person who deserves way more recognition and respect than he’s shown.

He has done more for this world in a few years than most people have in their lifetime, and for that in my eyes he is a hero.

CelebMix will continue to support Bieber, because we believe that Justin deserves the support. We’d love to hear your feedback and opinion on Justin and the article as well! Comment below or tweet us over at @CelebMix