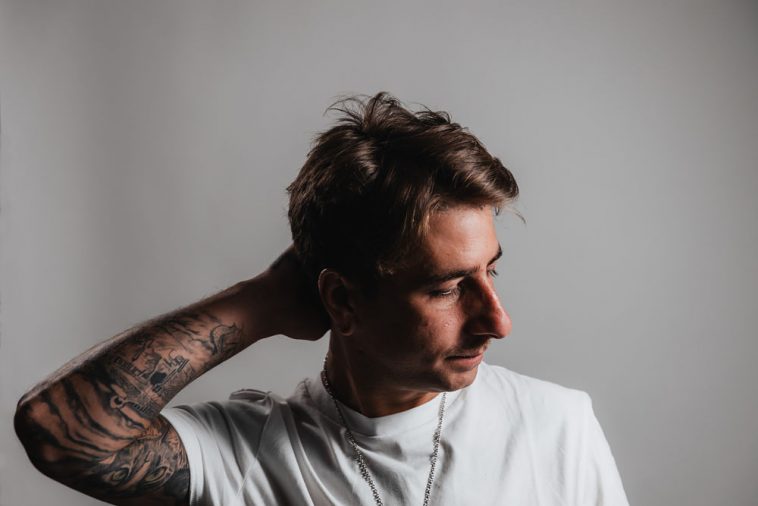 KVNE is the music project of Canadian artist Kevin, and he uses the platform to showcase himself creatively to the wider world. In fact, the name “KVNE” is actually just an abbreviation for his name, there was always more than one Kevin, So the last E stood for his last initial.

“I’m doing pretty well thank you,” KVNE expresses to CelebMix at the top of our chat about his newest single. “Spending lots of time working on trying new things in the studio to get some different sounds.”

“Oh man, thank you so much,” KVNE adds. “It’s been interesting, to say the least!”

Typically, KVNE tries to release a lot of music every year, but this year, he just wanted to try something different and really refine each single before releasing anything. His newest single, ‘Lay Me Down’ is an example of that new structure.

‘Lay Me Down’ is actually about maintaining relationships with old & new friends & manoeuvring that space between them. The title represents the idea of having someone to help you rest at the end of the day.

“I believe it does,” KVNE notes as he looks back on the creative process of the single. “I wanted to keep it playful and relatable, but also tell a story that could be timeless in the sense that sometimes, you’re lucky enough to have those worlds match up & work out.”

Although, in saying that, the majority of the time there’s some sort of void, making it harder and harder to identify between them.

The producer for this single is named Conor Conors, out of Toronto. KVNE and Conor had the pleasure of working together on a few releases in the past, and KVNE assures CelebMix it’s always a good time.

Something different about this song’s creative process was actually how long we sat on it, leaving it open to changes.

“I also invited a friend & writer Vincent Xavier to come in & make a few changes lyrically to the song before release,” KVNE adds.

This is the type of song that took direct influences from KVNE’s own life. In fact, when asked about it, he told CelebMix that he would have to say all of it.

“My life, like most others, has been quite the mess over the last few years,” KVNE says on the influence of his life on his art. “It’s harder and harder to figure out who’s actually got your best interest at heart.”

Whilst this is a solid song, all things considered, KVNE actually optioned adding a lead guitar part in the post-chorus, “I wish I could’ve figured out how to work it into the final version,” KVNE says, “but it was just competing too much with everything else sonically.”

Honestly, I just want to help. If listeners can hear to the song and feel like they relate… Or maybe it can help them through a tough time.

That aforementioned notion was really the goal for the majority of KVNE’s music. Writing has always been therapeutic for him, but sometimes what is more important is knowing that you’re not alone in feeling a certain way, and that is emphasized in the final output of what “Lay Me Down” truly is.

“As much as I would love to announce a big tour or string of shows, due to the pandemic, I still feel sort of grounded,” KVNE states on what the outlook of his 2021 could have been. “We have just released the ‘Lay Me Down’ music video and we’re trying to lock some support for a few major acts rolling through on their tour, but a lot is still too early to announce.”

KVNE is hoping to release at least another single before the year’s end as well, and he also has another dance collab on the way with NO1KNOWS & Canadian producer Adam Jasim. Stay tuned for more.