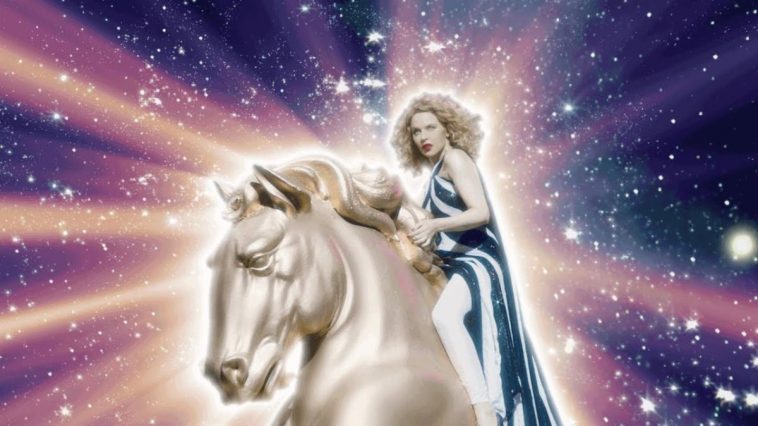 Produced by Jon Green along with long-term collaborator Richard “Biff” Stannard, and featuring brand new vocals recorded exclusively by Kylie herself at her home studio, the track takes on a whole new meaning and feel, as soft strumming guitars, a backing choir and light string section turn the dancefloor-ready bop into a dream-like rumination on togetherness.

Listen to Kylie Minogue’s acoustic version of Say Something below:

Can we all be as one again?

Directed by Sophie Muller (Beyoncé, Bjork, Radiohead, Coldplay, Gwen Stefani) the kaleidoscopic, other-worldly visual embodies all things psychedelia, as Minogue portrays a Space Age Hollywood actress travelling through the universe shooting lasers from her hands and flying on a hovercraft.

Say Something serves as the lead single to be lifted off of Kylie Minogue’s upcoming 15th studio album, Disco – scheduled to be released on November 6th, 2020.

Serving as the follow up to 2018’s hugely successful country inspired Golden, the record promises to be a “pop-disco” masterpiece, filled with exciting and unique, multifaceted dance-floor anthems that only Kylie Minogue can create!

Let us know your thoughts on Kylie Minogue’s new version of ‘Say Something’ over on Twitter @CelebMix now!