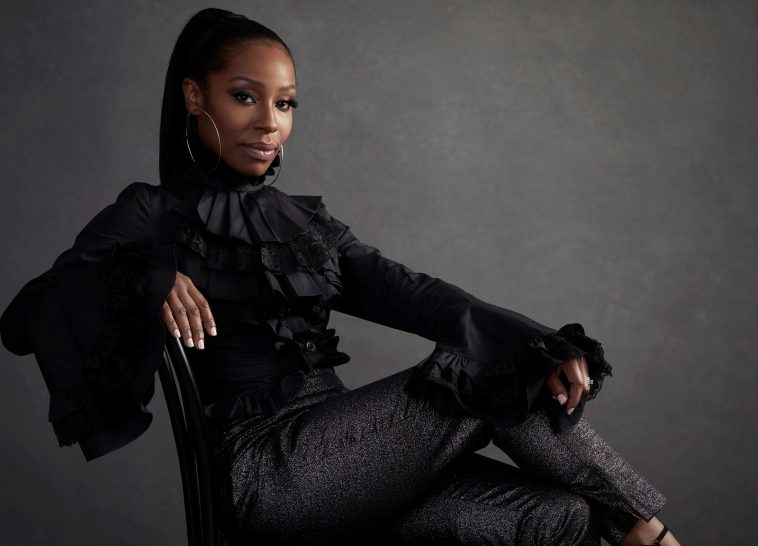 LaToya London: finalist on season three of American Idol, a highly sought after recording artist and a recipient of the Ovation Award for theatre.

In 2005, and shortly after finishing fourth on American Idol, LaToya teamed up with Peak Records for the release of her debut album, ‘Love & Life’, which debuted in the Billboard Top 100 and featured the stand-out track, ‘State of My Heart’.

LaToya then turned her attention to theatre, appearing in ‘Redemption of a Dogg’ (starring Snoop Dogg), ‘Silence! The Musical’, ‘Madea On The Run’ and ‘The Color Purple’, to name a few. Her portrayal of Nettie in the first Broadway tour of the latter, an Oprah Winfrey presented musical, earned her a nomination for an NAACP Theatre Award. LaToya then took home an award for her portrayal of Shug Avery in the Los Angeles production of the show.

LaToya is back on the music front with her new single, ‘Forever’, and so CelebMix hopped on a call for a catch-up.

‘Forever’ was produced by David P. Stephens and written with David and Kween. Was this a working relationship that had already been established?

We did a jazz track back in August last year, and it did really well in the jazz market – it was on the Jazz Billboard charts for seven weeks. Something that I have been doing, period, is writing songs for other artists and that’s something that David and I have always collaborated on, and so I would say that this relationship started over a year ago, with our first song being last year’s ‘For Me’. Kween and I have been friends and working together for a good twenty years and we’re both from the same area. It was just natural that he came in on ‘Forever’ too.

The visual for the track is stunning. Where abouts was it shot?

It was actually shot in my cousin’s backyard in the Oakland hills. We made it look like a total oasis- which it is. Her backyard is beautiful with all of the tropical trees and everything. My other cousin, who is a professional videographer, shot the video.

There seems to be a lot of symbolic meaning going on like the book stands full of Black literature, for example. Talk us through the message that you were trying to get across.

So with this track, I really wanted to celebrate my heritage, and a lot of those books hold information about my culture which is something that I’m proud of and wanted to share. Hopefully, it sparks something in others to do the same. A lot of people are looking at their genealogy and they’re doing the 23andMe because it’s important for people to know where they came from. It was me celebrating my roots and then encouraging others to do the same.

Would you say it’s important for artists to bring deeper meaning to their tracks?

Yeah, I mean people want to get to know you, they want to get to know how you feel, what your thoughts are and I think the visual for this track does a good job of that. With the other music that I’ve got coming up for release, I’m going to let people in even more and show them what I’ve gone through, especially during this time that I’ve been away. What are some of my experiences? And what are some of the lessons that I’ve learned? I think it’s so important that we as artists make relatable music that sparks thought in people.

So, you’ve just come off a hiatus from releasing music. Can you tell us what was going on in your life when you decided to take a break?

I ended up getting into theatre and I got real comfortable (laughs). You know, travelling and enjoying theatre and getting paid every week was really fun. I didn’t realise it at the time, but it was told to me before that with music you’ve gotta strike while the irons hot, and I didn’t really take head to that. So now I’m having to tap into a new audience who probably have no idea who I am. There are, however, fans that have supported me from the beginning, which is beautiful. I did the theatre for a while and it’s definitely something that I wanna continue to do, especially on the film and television side, but it’s difficult to do music and theatre at the same time because the theatre demands so much of your time. Now, I feel like it’s time to give my music some energy and attention. I’m just really thankful that I have the opportunity to do that and people are still there to receive me.

Do you feel blessed by the reaction to ‘Forever’?

It feels reassuring. I had doubts and insecurities about whether the new people would receive me, or not. But so far it’s been great. I’m really excited about the new fans that are coming on board as well as giving the fans that have always been here what they’ve been waiting for. In a way I felt really bad (laughs) because people were like “Yo, where are you at? I love you and I love your music.”

What came first for you, the music or the acting?

I would say that my longest-running passion has been music. I started listening to music as a very young child and immediately felt the emotions of artists like Whitney Houston and Maria Carey. I was offered a role in a musical right after American Idol and from there, I caught the acting bug. But music was definitely my first love.

And we read that you are working on a project to help adults hone their creative skills. Could you tell us a little bit more?

I’ve done workshops before, and I’ve worked privately with artists before and so it’s definitely a passion of mine. I understand what it is to have stage fright, be developing as an artist and trying to figure out who you are. I’ll sometimes have a student who wants to be like Adele, but I’ll always ask them “yeah, but who are you?” Helping an artist break out of whatever blockage is stopping them, showing them how you captivate an audience on stage and generally just finding what works for a particular artist is very special to me. It’s ultimately about understanding where they want to be and how to get them there so that they can be the best at being themselves. It’s something that I would love to do more of in the form of a school or digital platform.

And how has COVID-19 impacted on some of the things that you had planned?

As soon as it happened, I had some gigs that needed to be cancelled. There was a period where I was thinking “what am I going to do next?” The idea that I had before the pandemic was to actually do a live streaming concert which I kept putting off. When the pandemic happened, I started seeing artists actually doing it and I was like “hey, I had that idea before you all”. I mean, we’re still in this thing so as performers we just have to come up with new ways of being there for our fans. But it’s a blessing that I still get to go into the studio and record and release music.

So, is there an album in the works?

Yes. This single is the first off the album which should be released around spring next year. In the meantime, I will be releasing some holiday music because one thing that I learned is that you have to stay out there. I definitely want to stay on the airwaves and in people’s ears even during the holidays, and then I will probably drop another single from the album at the beginning of next year.

And what sort of sounds can we expect to hear on the new material? Are you tapping into anything new?

It’s going to be filled with pop, R&B and hip-hop songs. So a similar flavour to my last album. I’m not a one-trick singer and so I want to showcase that in the music that I put out. I will say, however, that the lyrics will be a lot more intimate. They are going to be very personal and come from a very real place. A lot of the songs on my last album were submissions from other writers and so I was interpreting somebody else’s emotions. This album is way more personal because each song comes from my own heart and my own personal experiences. I think that it will allow people to get to know me in a way that they haven’t known before.

So, given that this upcoming album is going to arguably be your most personal to date, have you ever toyed with the idea of turning the album into a theatre production?

It’s funny that you say that because it’s something that my manager and I have spoken about before. I had a one women show in the works that I was going to try and do but literally bringing my songs to life on the stage would be really special.

For the latest on LaToya London:

What are your thoughts on LaToya’s new music? Let us know on Twitter @CelebMix.