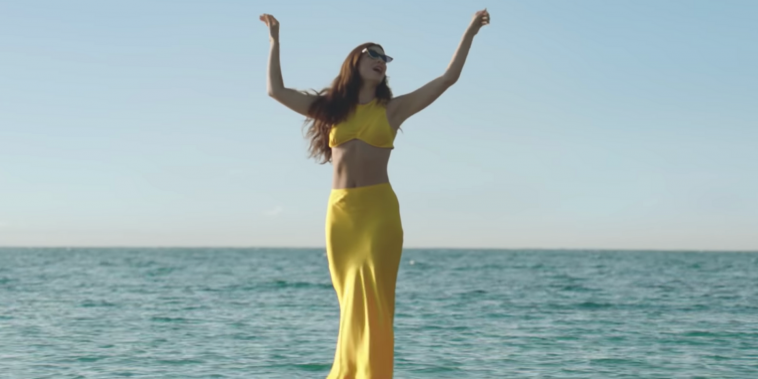 New Zealand singer-songwriter Lorde is back with her new single ‘Solar Power’, her first release in four years.

Written and produced by Lorde and Jack Antonoff, ‘Solar Power’ is a delicious slice of summer, drenched with positive sun-kissed vibes which is a departure from her previous Melodrama era. The track also features background vocals from fellow artists Phoebe Bridgers and Clairo, marking their first collaboration and the first time Lorde has had any other vocalists on her songs.

Speaking about the track with Triple J, Lorde said “This one just felt like the perfect first chapter for this album. It’s about that infectious, flirtatious energy that starts to come into the fold come like, December for us, June for the other half of the world, and for this record that’s about the magic of the sun and of nature I just thought it was really cool, light, cute, fun, zany place to start.”

The track comes accompanied by a glorious music video which is seemingly an introduction into what we can expect from the artist’s third album. Of the visual, Lorde said: “I love the video. We made a whole bunch of videos for this album. We built basically a universe on a beach – a secret beach – so this video was kind of like me introducing you to the world of the album and the videos and I kind of play like a quirky tour guide.”

‘Solar Power’ is the lead single and title track from Lorde’s third studio album, which is expected later this year. The album will follow on from 2017’s critically acclaimed Melodrama, which included the singles ‘Green Lights’, ‘Perfect Places’ and ‘Homemade Dynamite’.

‘Solar Power’ is available to download and stream now.