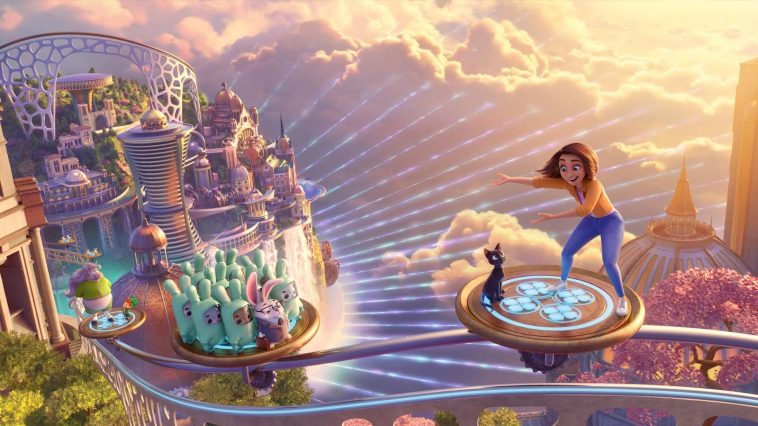 The past two years might have seemed like a whole lot of bad luck to most people. But for the team at SkyDance, that didn’t stop them from creating more magically animated worlds during the pandemic. This includes Luck, the first full-length feature animation from SkyDance headed by John Lasseter. Luck is the tale of Sam, the unluckiest girl in the world, on her journey to change her luck.

If you think you’ve had a bad past two years – try watching Luck. Sam’s story might make you feel better.

Luck is a fully computer-animated, feature-length film with a fantasy plot. It takes place in the land of Luck, which is a kingdom dominated by two predictable forces – good luck and bad luck. Their kingdoms are so influenced by these two forces that the towns themselves are called Good Luck and Bad Luck. The citizens of the two kingdoms don’t always get along together, but a wrench thrown into the works could be what it takes to change that.

Sam (played by Eva Noblezada), the unluckiest woman in the world, is that wrench.

When Sam bypasses the head of security (played by Whoopi Goldberg) to meet with the CEO of Good Luck, The Dragon (played by Jane Fonda), they are determined to help her. The Dragon is the oldest person in the land and believes that good luck is the key to success. As the Dragon figures out that luck isn’t everything, she begins to mend some wounds between Good Luck and Bad Luck… as well as the issues that have been impacting Sam’s life.

If there’s one thing that animation studios like SkyDance Animation are good at, it’s making parables shiny and new through the lens of animation. In the case of Luck, this parable translation couldn’t have come at a better time. According to the movie, luck is what you make of it. And that’s just what SkyDance had to do (along with the rest of the world) in 2020.

Luck has been in the works for some years now over at SkyDance. Production started shortly after John Lasseter joined SkyDance in 2019 as the head of their animation team. Lasseter was one of the driving forces behind Pixar in the late 1980s and early 1990s, spearheading some of the most famous computer-animated classics, like Toy Story and Cars. It seemed only natural that his addition to the SkyDance Animation team would be good luck for the Luck crew. Unfortunately, a global pandemic had other plans.

The movie started strong, with a robust production team and substantial funding in 2017. Although it was initially part of a multi-year deal with Ilion Animation Studios and Paramount Pictures, it was then picked up by AppleTV + alongside Spellbound and the animated short Blush. SkyDance picked up John Lasseter shortly thereafter and was set to be released in the fall of 2021. However, when Covid-19 hit, it put a few kinks in the movie’s release.

SkyDance Animation’s handling of Luck was revolutionary. Being faced with never-before-seen issues, the team had to think on their feet to get back on track with their animation schedule and voice recording. Thanks to technological advances, animators could do a lot of this from home, which meant that the original release date was only set back by half a year. With the progress the team is seeing, Luck could likely be out within the early months of 2022. Currently, it is scheduled to be released before the end of February.

As well as several talented animators housed by SkyDance studio, Luck’s production is headed by John Lasseter, David Ellison, Dana Goldberg, and David Eisenmann. But the production team is only the start of it – Luck is packed with an all-star cast appealing to a swath of different ages.

An excellent animated feature film has at least one recognizable voice that hooks the viewer and helps them relate to the story. Luck went above and beyond, capturing some of the biggest voice-acting stars of today as well as some of the most classic actors of all time. All the while, they leveled the playing field by hosting some new voices in the animation world.

Luck has the recipe for a successful feature-length animated film: award-winning animators, talented voice actors, and an innovative streaming platform. Viewers will have to wait a few weeks until the movie itself is released to see whether the movie made it through the bad luck of the past few years!