The Aussie lads of the band 5 Seconds of Summer finished their very first own tour Rock Out With Your Socks Out last year. They released their second album Sounds Good Feels Good as well, and now we’re counting the days until their second headlining tour Sounds Live Feels Live‘s kick off.

To keep you more excited about SLFL, we brought you some facts about Luke so you can imagine what’s going on backstage. We can’t see the things behind, but you can imagine after this stuff what we can expect.

When Luke once talked about the interaction with female fans, he said, “When you put four young dudes on a tour bus, playing theatres, then arenas, you’re going to have sex with a lot of girls, I guess. We had a good time.”

Most of the people think Luke’s the quiet and shy guy in the punk-rock band but after this statement, we can’t believe he doesn’t have a dirty mind. Well, at least he is honest and doesn’t hide what he thinks

Earlier the band shared their tour riders with the world, which are backstage requests filled by promoters. All of the boys had weird stuff on their tour riders, but we’re just staring at Luke’s one. His list includes next to his celebrity crush Selena Gomez bizarre items – ‘a happy gorilla’? Really? It’s okay; he doesn’t have luxury wishes like other superstars… 3. His enthusiasm over TV show

If you didn’t know, in case his enthusiastic tweets didn’t give it away, his favourite TV show is How I Met Your Mother. We don’t blame him; it’s a great show but looking at his zest we can imagine that Luke’s watching it not only on the tour bus but also backstage. 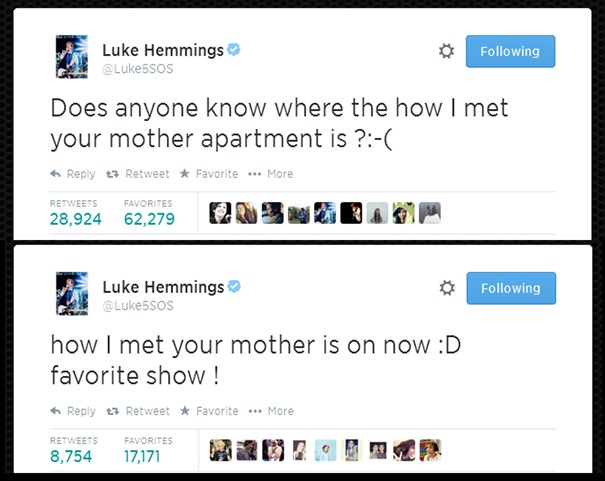 Everyone’s got something they bring with them everywhere, every time. The 5SOS boys have lucky underwear – Luke has a pair of SpongeBob ones, and he LOVES it. Once he said, “I played some good shows in them”. Well, you know now which underwear he’s going to wear perhaps on SLFL’s shows…

How can’t we think of band fights when it’s a group of four young lads? Luke revealed, when there are conflicts within the group, it’s usually about music and rehearsals. He also remarked that even when they are having issues, the first thing he does when he’s bored or just feeling lonely is call one of his the guys in the band. Most likely in situations like that, he usually FaceTime the other lads.

“You kind of have to learn to live with these other three people, and it’d be terrible if you didn’t get on. You kind of know what each other likes and doesn’t like at this point, so that makes it a lot easier,”

“Just getting along with your band all the time is so important. The tighter you are, especially on stage, the better you are!” he exclaimed.