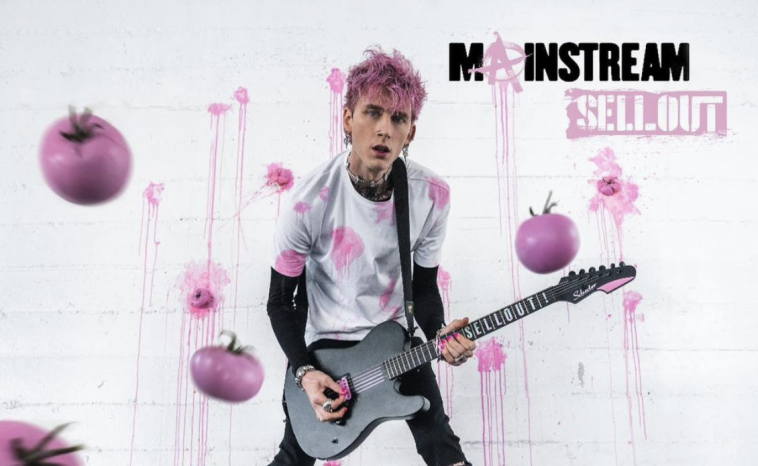 Machine Gun Kelly just revealed the tracklist for his upcoming album, Mainstream Sellout, in the most creative way and it involves Dolce & Gabbana.

Outside of Delilah, a popular dinner and drinks spot in Los Angeles, MGK undressed out of 16 layers of shirts designed by Dolce & Gabbana…each one spelling out the name of one of the album’s tracks.

After the big in-person reveal on Sunday for paparazzi, he posted photos of the shirts and unveiled the official tracklist on social media.

Mainstream Sellout follows Kelly’s 2020 pop-punk album, Tickets To My Downfall. The project is set for release on March 25, 2022, although the “emo girl” singer graciously revealed its tracklist over a week in advance to fans.

Three out of the 16 songs have already been released and shared with fans: “Papercuts,” “Emo Girl” feat. Willow and “Ay!” feat. Lil Wayne. However, there is plenty more unreleased content on this project. Fans can expect collaborations with Iann Dior, Blackbear, Bring Me the Horizon,Young Thug and Gunna. An interlude featuring Pete Davidson is included on track 5: “Wall of Fame” as well.

In an interview with Billboard, MGK teased the album’s sound: “It feels more guitar-heavy for sure, lyrically it definitely goes deeper – but I never like to do anything the same. Every album is a juxtaposition of the last album. So I went and studied ‘Tickets,’ and I heard the bright sound that I had, and for this album I just turned the lights off.”