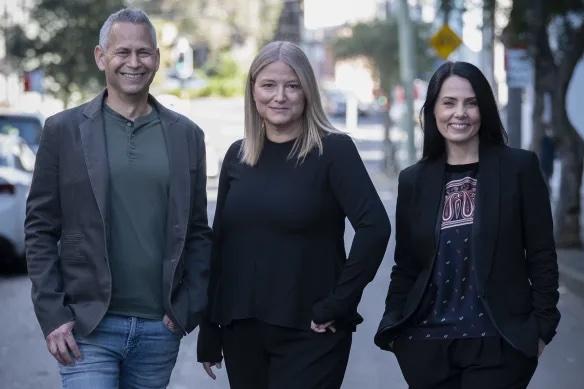 Recently, Deadline sat down to talk to husband-and-wife pair Steve Hutensky and Bruna Papandrea about their many successful projects. Several years after founding their development and production company Made Up Stories, the team, which includes Jeanne Snow, Sarah Harvey, and Jodi Matterson, have been the masterminds behind a number of major hits on the air. We look at how shows like Pieces of Her, Anatomy of a Scandal, and The Undoing highlight the company’s larger themes of female-driven tales and how their latest feature hit, Luckiest Girl Alive, fits into their larger mission.

Made Up Stories may have only begun 6 years ago, but since its debut, the company has already earned a reputation for being a force in the industry. From Hugh Grant to Nicole Kidman to Toni Colette, the production company gets big-name stars behind its well-received projects. Mila Kunis’ Luckiest Girl Alive, recently topped the global Top 10 list for Netflix. The Dry and Penguin Bloom, with Eric Bana and Naomi Watts respectively, brought life back to the Australian box office in 2021. What’s more, they managed to pull off these feats during COVID.

Papandrea says that looking back over the last few years, she was pleased to not only hit but surpass her targets. “Our approach has always been to make the projects and then talk about it, not the other way around, and to grow the business and people accordingly. We’re not trying to sustain a machine that is unsustainable.” Steve Hutensky and his wife are focused on growing the company without overwhelming operations. Slow, steady, smart: these are the values they live by.

The other major component of the company is finding stories that strike a chord with a larger narrative. Female-led books and scripts present fascinating angles that go largely unexplored on the screen. This is why the team has taken it upon themselves to cultivate relationships with companies that share the same opinion. Made Up Stories famously has a great relationship with Fifth Season, and the two companies look forward to collaborating on a number of projects with strong, complex female characters at the heart of the conflict.

There are now 14 people working at Made Up Stories across 3 territories, including Los Angeles, and the enthusiasm and buzz of the company is practically tangible. Even during the interview with Deadline, leaders were texting each other back and forth, excited about books that might eventually become their next big thing. Papandrea says that if you’re going to work with people all over the world, you really need to like the person that you’re going to have to call in the wee hours of the morning. It’s not easy to find people who you both hit it off with and share the same basic tastes, but it is possible if you put in the work.

Papandrea started Made Up Stories in 2017 after leaving Pacific Standard, the company behind Wild, Gone Girl, and Big Little Lies. Steve Hutensky and Papandrea were both ready to work together on their own projects, especially after they’d built a reputation in the industry for being author-friendly. Jodi Matterson was encouraged to join Made Up Stories after realizing Papandrea was jumping on the same novels she wanted. Matterson knew Papandrea from her professional past, so she decided to take action. Matterson said she called Bruna to tell her she was optioning way too much, only to be offered a job in return.

When the pandemic happened, it turned out to be a blessing in disguise for the production company, because Made Up Stories had their base in Sydney. When LA and Canada shut down, the projects were moved to the east coast of Australia. The indie titles The Dry and Penguin Bloom scraped together $15.5 million and $5.7 million at the box office. More than that, it brought Australians out of their homes and back into the movie theater. The company’s Australian projects, which include Josh Gad’s Wolf Like Me, and unscripted reality show Undressed, have also been growing rapidly.

Steve Hutensky and Bruna Papandrea may live in Australia, but they set up their production company to have an international presence from Day One. Their next titles include Falling Girls, Sylvia’s Second Act, and To Sleep in a Sea of Stars. These titles run the gamut in terms of both genres and demographics.

One thing’s for certain, the team won’t be looking to anyone else for an example. Hutensky has said “The second we start to try and follow others, I think that’s the mistake for us.” Made Up Stories has earned a reputation in the entertainment industry for being steadfast and practical while adhering to a larger mission. It seems clear they’re poised for even greater success ahead.