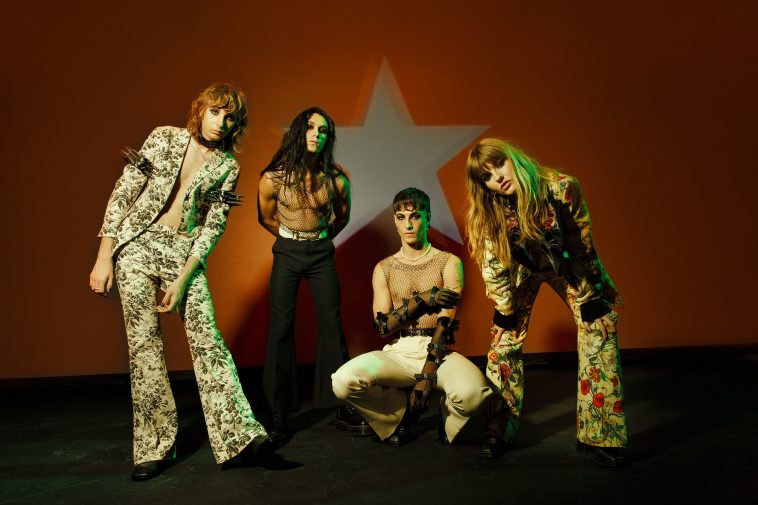 Italian rock band Måneskin have unveiled the racy visual for their global smash hit ‘I Wanna Be Your Slave’.

Directed by Simone Bozzelli, the sizzling visual sees the four-piece band star in their very own no-filter live show as they drop viewers “inside a voyeuristic loop where forbidden desires are matched with a little sacrifice.”

Styled in Gucci, the band perfectly capture the song’s mood and lyrics as they embrace sexuality in all its nuance. Featuring domination, spitting and other sexually suggestive acts, you might want to watch this jaw-dropping visual away from prying eyes.

‘I Wanna Be Your Slave’ is taken from Måneskin’s second studio album Teatro d’ira: Vol. and has already garnered more than 178 million streams on Spotify. The track recently catapulted to the top five of the UK Singles Chart and has even been certified platinum in Italy, Finland and Poland; six-times platinum in Russia; and was certified Gold in Austria, Greece, Norway, Sweden and Turkey.

Måneskin, made up of Damiano David, Victoria De Angelis, Thomas Raggi and Ethan Torchio, rose to global fame earlier this year after winning the Eurovision Song Contest 2021 with their song ‘Zitti e buoni’. The Italian quartet captured the hearts of music lovers across the world and have reached astronomical new heights.

‘Zitti e buoni’ became the first Italian song in 20 years to chart on the top 20 of the UK Singles Chart, whilst ‘I Wanna Be Your Slave’ was the first song by an Italian band to reach the top 10. They later became the first Eurovision winners since Celine Dion to have two songs in the UK top 40, as well as a top 10 hit with a non-contest song.

If that wasn’t enough, their 2017 cover of ‘Beggin” (as performed on X Factor Italia) also reached the top 10, making them the first Italian act and the first Eurovision-associated act to have two songs charting in the UK top 10 at the same time. The tracks have also been viral hits on TikTok and have allowed the band to chart in the US, Spain, Australia and more.

Let us know your thoughts on Måneskin on Twitter @CelebMix