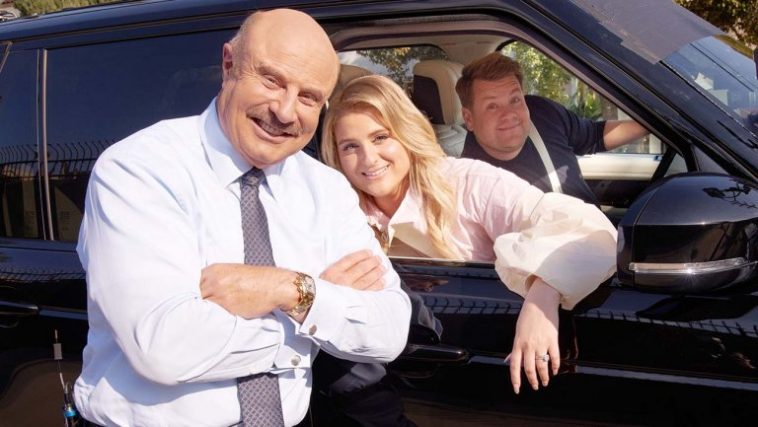 During the latest instalment of Carpool Karaoke, Meghan Trainor joined James Corden in travelling through her best tracks over her singing career.

The musical pair first started to sing along to Meghan’s debut single from 2014 called ‘All About That Bass’. With Meghan and James dancing and singing along to this iconic song, it was a very entertaining scene to start off the Carpool Karaoke.

In between songs, James questioned Meghan about how she met her husband Daryl Sabara. Meghan told us the inside gossip of how she met her wonderful husband during a bowling double date with Chloe Grace Moretz and Brooklyn Beckham.

Meghan told James that her husband Daryl is like no other and that she knew instantly that he was the one that she wanted to marry. After the passionate conversation about Daryl, Meghan and James softly sang her loving song ‘Like I’m Gonna Lose You’.

We also found out how Meghan has helped write songs for artists including Michael Buble, Jennifer Lopez, Rascal Flatts and more, becoming a professional songwriter which is something she has always wanted to do. During this talk, James asked her to sing a song about traffic, with Meghan creatively coming up with our new favourite bop.

James and Meghan also sang Trainor’s new song called ‘Nice to Meet Ya’, a collaboration with Nicki Minaj which features on her new album Treat Myself. After this song, Meghan admitted that she is very inspired and loves Dr Phil. With this said, Dr Phil made an appearance in the Carpool Karaoke show too; causing Meghan to deliver one of the most iconic reactions we’ve ever seen. She even told him that his teeth look amazing!

Meghan also talked to Dr Phil about her new album and how it is inspired about when she went through panic disorders. Meghan said she was in the ‘red zone of anxiety’. The talented singer has spoken up about her anxiety struggles through her new album, delivering inspirational songs which everyone will love.

At the end of the show Dr Phil, James and Meghan all sang along to a reprise of ‘All About That Bass’, with Meghan in disbelief that her idol was joining in with the fun.

Check out Meghan Trainor take on Carpool Karaoke in all its glory below.

What did you think of Meghan Trainor on the latest episode of Carpool Karaoke? Let us know @CelebMix