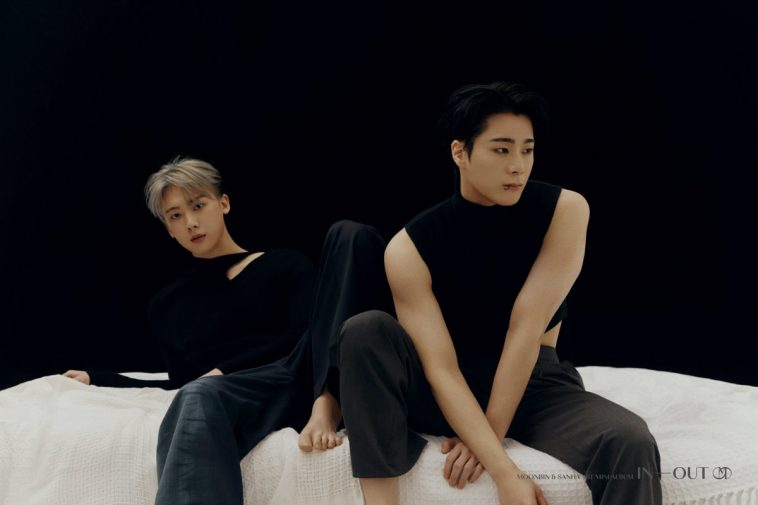 Moonbin and Sanha are part of KPOP group, Astro. Recently they have formed a sub-unit, where they released a mini album last month, called In-Out. We think the mini-album sounds amazing.

The mini-album features, five tracks. With the title track of the album being, ‘Bad Idea’. They released plenty of teasers ahead of the release. So we were pretty hyped up. They also released a highlight medley of all the tracks prior to release.

In addition to this, they released a music video for ‘Bad Idea’. We think that the concept for this song and the mini album as a whole, was really aesthetic, whilst featuring dark shades of colours.

Sanha also changed his hair colour for this concept, with the front part being blonde and the back being a black colour. We were absolutely vibing with his new look.

Moonbin sported a different vibe for this album concept. With the concept of this mini album seemingly having a dark vibe. Whilst the lyrics are in Korean, there are some English lyrics, to the song ‘Bad Idea’, the lyrics include, “All I got is bad, bad, bad idea” and “This bad, bad dream comes real”. This matches the dark concept surrounding the mini album.

Cha Eun Woo, also a member of Astro, posted a picture with Moonbin and Sanha on what appeared to be the set of the music video for ‘Bad Idea’.

Other tracks on the album include ‘All I Wanna Do’, which has a sort of laid back vibe and beat to it.

Another song is ‘Alone’, which is a slow song. But has such a upbeat, but slow backing track to the song.

‘Eyez on You’, is another song that the mini album features. This is a song that is upbeat. Featuring a beat drop before moving into the aspect before the chorus featuring the line ‘Eyez on You’.

The last track on the mini album is called ‘Dream Catcher’, which features a chime sound at the moment before the song begins. This is another laid back song, and is an amazing song to complete the mini album.

It is so difficult to pick a favourite song from this mini album. We absolutely adore all of the tracks.

Are you a fan of KPOP music? We would love to hear who your favourites are. Let us know on twitter @CelebMix