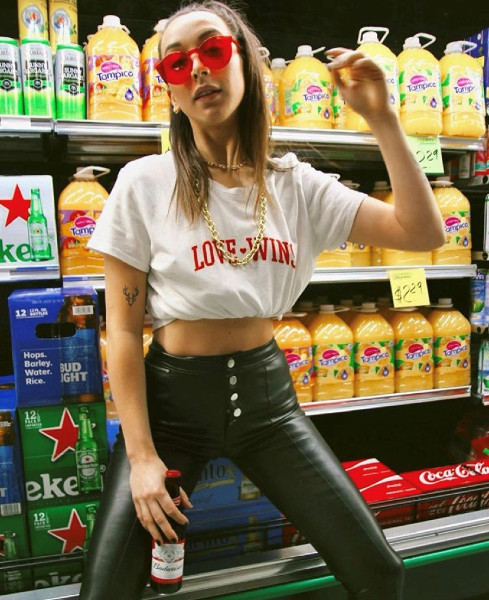 Natalie explains, “Remember those pacts we used to make as kids when you spit on your hand and shake someone else’s to show that it’s real? Somewhere along the way, I realized that this practice was an ancestor of another, more gory one, that involved exchanging blood with someone to show that the deal, or bond, or whatever, could never be broken. When I started writing this song about falling so hard for someone that you know it’ll be life-changing and you’ll never really be able to undo it, I thought of that exact phrase, ‘blood bind.’ I wrote the hook stating, ‘I treat it like a blood bind, baby there’s no take-backs, you know that I care too much; can’t tell if that excites you, or makes you want to run to, someone who don’t care enough.’ I wanted to elicit the fear that comes with developing intense feelings for someone, like, ‘oh s*** here I go.’ Even if it all ends badly, or it isn’t reciprocated, you’re all in whether you like it or not.”

Riley describes the interesting way he ended up being featured on “Blood Bind,” “I had been following Natalie’s music for a little over a year. We had talked about doing a record together, and it just hadn’t happened yet. She did one of her ‘QuickWrites’ on IG of ‘Blood Bind’ and I immediately was drawn to the depth of the record. I commented on the post ‘Send me that,’ and knocked out the verse the next day. The song ripped already. And I was glad I could add something to it and not take away from it!”

Often likened to Halsey, Kehlani, and a female Post Malone, Natalie’s sound blends sultry R&B savors with delicious tints of pop, including an array of topics such as heartbreak, society’s perception of young women, personal sorrow, and abuse.

Natalie Carr has it going on! “Blood Bind” drips titillating, silky-smooth R&B atop an infectious rhythm, all capped by the superb voices of Natalie Carr and Riley.