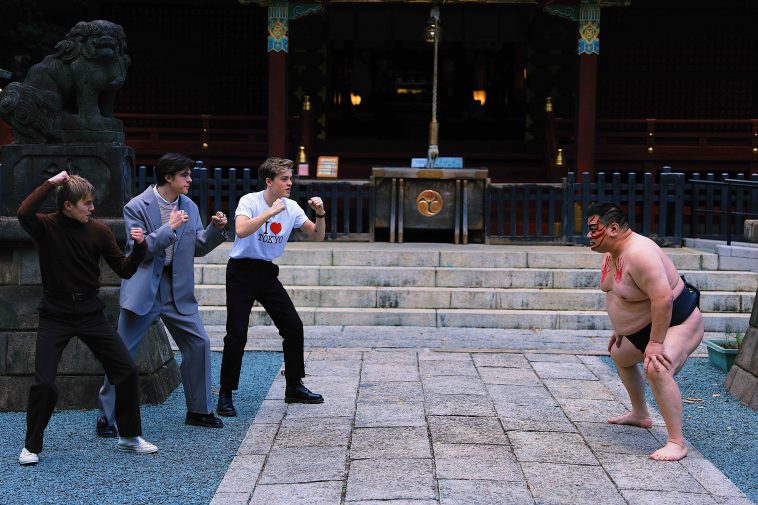 New Hope Club have released their new single ‘Let Me Down Slow’, which sees them team up with producer and DJ R3HAB.

The infectious bop, which has long been a hit with their fans during live shows, forms part of their forthcoming debut album, which is due for release on Valentine’s Day.

To coincide with the track’s release, New Hope Club have also unveiled a music video for it which was shot in Shinjuku, Tokyo. Directed by Jordan Wozy and Frank Borin, the visual sees George, Reece and Blake come face to face with their female counterparts.

A wild goose chase along the streets of Tokyo ensues, with the band following the girls into an arcade. They then get pulled into R3HAB’s Sumo Showdown and battle a sumo wrestler before enjoying a party where they (and their dance moves) are the stars of the show.

Check out the fun visual for ‘Let Me Down Slow’ below.

‘Let Me Down Slow’ follows on from the release of tracks including ‘Know Me Too Well’, ‘Fixed’, ‘Medicine’ and ‘Love Again’, all of which will appear on their debut album. Their self-titled release is available to pre-order now.

In support of the album, New Hope Club will be performing their biggest UK headline shows to date this April. Kicking off at Dublin’s Olympia Theatre on April 5, they will also be performing in cities including Birmingham, London, Manchester and Glasgow.

Speaking about their forthcoming tour, New Hope Club said: “We are beyond excited to tour our debut album in April 2020. This will be a breakthrough tour for us; our biggest headline shows to date in the UK & Ireland and just the start of what we hope will be a massive year. We can’t wait to get back out there and play.”

Remaining tickets can be found here.

What do you think of the studio version of ‘Let Me Down Slow’? Did you enjoy the music video? Let us know your New Hope Club related thoughts on Twitter @CelebMix