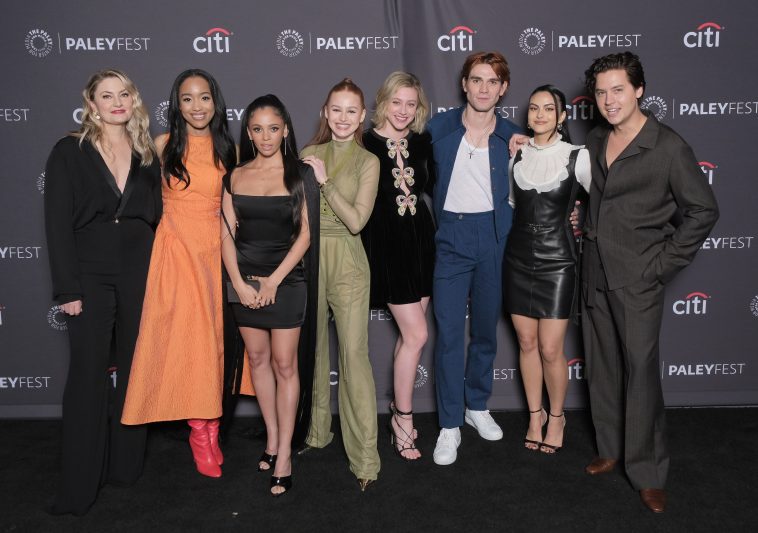 HOLLYWOOD, CA - APRIL 9, 2022: Cast of Riverdale at PaleyFest LA 2022 honoring Riverdale, presented by The Paley Center for Media, at the DOLBY THEATRE on April 9, 2022 in Hollywood, California. © Michael Bulbenko for the Paley Center

The PaleyFest is one of the first festivals focused on the Television industry. For 39 years PaleyFest has presented cutting-edge programs and connected TV fans with the stars of their favorite shows. As Riverdale is honored to be a part of this year’s festival, held at the iconic Dolby Theater, we chatted with some of the cast on the red carpet before they took the panel to chat with fans. “It’s exciting man, I forgot how much energy this takes out of you,” Apa said. “But it’s exciting, we haven’t had the opportunity to communicate with our fans as much as we’d like to in the flesh, so this being the first time in a while, we’re all pretty pumped about it.” Cole Sprouse spoke enthusiastically on the festival, “I was going down the line and I was like “man, the budget has increased tremendously.” I was very impressed with how much bigger it is now, the business and finance team dude, they deserve a pat on the back, cause this has increased a lot. It’s big now, it’s much more official, it’s very validating.”

As everyone knows, the show is currently in its 6th season, going into its 7th, where there are talks of supernatural powers coming into play now. KJ Apa hopes “to be Spider-Man, point blank, period.” Apa wished for, “that’s the only thing I would ask for.”

The current 6th season started with a 5 episode special which had Kiernan Shipka guest starring as Sabrina, from the Netflix series, The Chilling Adventures of Sabrina, which was tied into the same universe as Riverdale. “I didn’t get to work with her (Kiernan) and Kiernan and I are good friends, which was a shame. I didn’t actually have any scenes with her, maybe next time, ” Sprouse spoke on missing out working with Shipka. “I don’t know (the energy), I wasn’t there unfortunately, but I assume (the energy was high), she’s just a bubbly beam of light. After Sabrina, she’s so use to sort of technical challenges of shooting a production like this.”

As the show heads into its 7th season airing on the CW network, the cast had some hopes for their characters leading into the next season. Apa thinks “it would be cool to see him settle down. I feel like he’d be happy in that environment of just getting married, having kids, stuff like that, it could open up a lot of cool stuff.” Camila Mendes said “I hope to see closure, not just for my character but for every character. I feel like they’ve all been through so much together. I would really love to see the stories end in a sort of blissful, sweet, hopeful way.”

Make sure you stay up to date on all things Riverdale by catching it on the CW every Sunday. Let us know your thoughts on Twitter @CelebMix