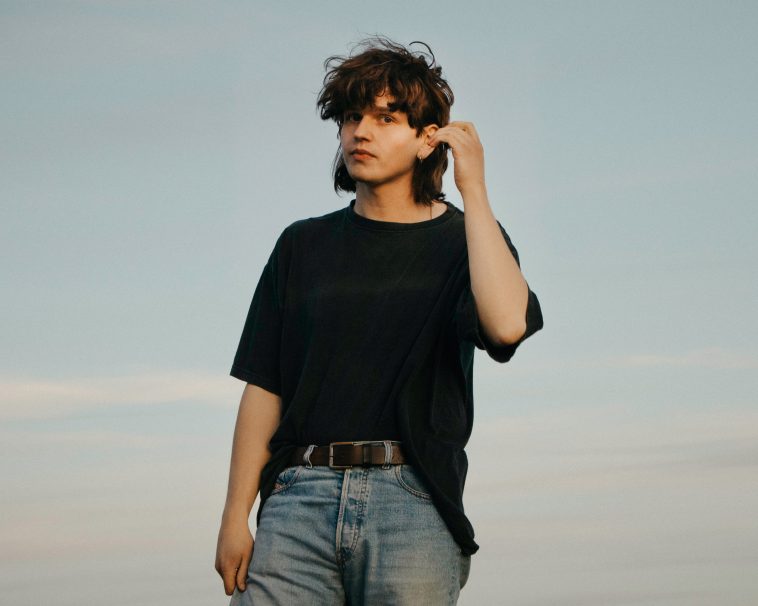 Philip Brooks is a dream-pop artist and producer currently based in Brighton. “I write songs about mental-health struggles,” Philip reveals to CelebMix in our chat about Philip’s new single, “my ongoing gender-identity crisis and always feeling way too many things all at once.”

Earlier this summer Philip fled London to stay with their family in rural Germany and the situation felt a lot less intense here. “We have a big garden with lots of veg and fruits and I can cycle everywhere,” Philip continues, “so I don’t need to be in public too often.” Philip started journaling again and right now they are reading through all of Patti Smith’s books. So it’s safe to say Philip Brooks is in a good headspace at the moment.

Recently Philip Brooks released a new single titled ‘I’m So In Love With All Of My Friends‘, at the time Philip wrote it, the artist was thinking a lot about how thin the line between romantic and platonic love can be. “I tend to feel quite strongly,” Philip reveals, “so throughout my life there have been times I wondered if I’m just always falling in love with everyone I know.”

Sometimes Philip would tell people they had a crush on them, even though Philip really just liked them a lot as friends, and made things awkward for no reason. “I lost a good few friends like that,” Philip explains. “I eventually found that I’m just very fond of my friends, but still sometimes wonder if they feel that strongly about me too.” Also with corona and everything around going on Philip found it quite hard to hold on to friendships and was stuck in this state of always missing everyone.

What was the creative process like for your new single?

“The first demo of the song I wrote in 2019, a few months before my move across the ocean to London. All I had at that time was a rough instrumental and the bridge. I tend to write vocal lines by just improvising over an instrumental and that bridge just unexpectedly came out in one take, as if I already knew exactly what I wanted to say. I put the demo away until I earlier this year started working on it again. It then was just a matter of a few days until I had all the lyrics and parts written.”

“Oh, a big lot, a lot more than usually. The lyrics are just honest descriptions of how I felt when I was writing the song and the situations I was in. As I was moving between London, Brighton and my old hometown in Germany, the recording process was heavily influenced too. Some tracks I recorded in my childhood bedroom a year ago, the drums were recorded by my live drummer Joe Cooper in a studio in London, synths I did at my friend’s place in Brighton and the rest of it I recorded myself in Germany. It was quite the challenge putting this one together that way, but I feel through that it sounds just right. I mean, it’s a song about a chaotic life situation so it might as well be a bit chaotic haha.”

Why did you decide the single and why release it now?

“I don’t think I ever really decide to make a song. They just kinda decide to appear out of nowhere by themselves. Earlier this year I was looking through my folder of unreleased songs and the demo of this one stuck out as extra relevant to me. I like to release the songs that are meaningful to me at the time so it just felt right to release this one next.”

“I’ll be in Germany for the next few months writing and recording new music. I’m trying to write one song a day, so when I’m back home I have a big pool of songs to choose from and release. I’m also doing my first big production project for someone else soon, which I’m very excited about!”