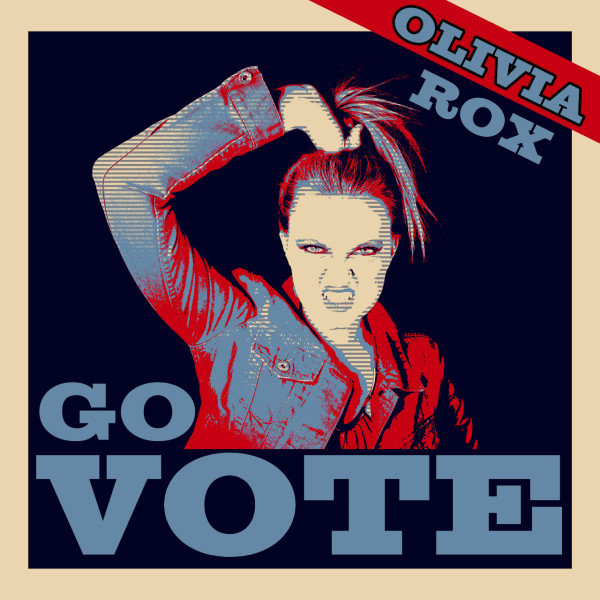 Pop-rock singer-songwriter Olivia Rox introduces her latest single, “Go Vote,” a song urging voters to get out and make their voices heard in the upcoming presidential election.

The track’s genesis took place while Olivia was talking with friends. Asking them if they were going to vote, they replied that they probably wouldn’t because they didn’t think their votes would make a difference.

Inspired by their remarks, Olivia wrote “Go Vote” to encourage younger generations of voters to exercise their political franchise.

Olivia grew up in Colorado. Her father is celebrated jazz saxophonist Warren Hill, and her mother, Tamara Van Cleef, is a writer, director, and producer. At the ripe old age of 2, Olivia sang “Someday My Prince Will Come” before the vast audience at the Chicago Theater.

Then as a teenager, she auditioned for both America’s Got Talent and American Idol. By means of her dazzling voice and unbroken composure during performances, she made it to the Top 10 on American Idol. Her next feat was to release an album, PopRox. Three singles from the album hit the Top 40.

While preparing to tour Europe, followed by touring the U.S., Olivia’s plans took a blow when the pandemic shut everything down. Rather than feeling sorry for herself, Olivia made lemonade out of lemons – starring in The Olivia Rox Show – Live From My Living Room – The QuaranTUNE Sessions, which became a sensation on Facebook, drawing hundreds of thousands of weekly viewers. She followed with Season 2, entitled The Summer Sessions.

Somewhere in there, Olivia found the time and energy to lay down tracks for Just A Girl & Her Guitar, a stunning assemblage of minimalistic songs exuding alt-pop and alt-country savors.

“Go Vote” opens on low-slung emerging colors topped by Olivia’s galvanizing voice, discharging potent textures of riot grrrl flavors amalgamated with wicked pop-rock relish. When the guitars kick-in and the harmonics mousse up, the tune takes on the electrifying punch of Katy Perry crossed with Joan Jett, only more swaggering and muscular.

Olivia’s voice, akin to a nuclear-powered hurricane, really revs it up. She can sing!

“To shout it from the rooftops / Let’s all scream it loud and not stop / Let’s all write it down on a note / Everyone get out and go vote! Go vote!”

With “Go Vote,” Olivia Rox not only delivers a vital message, but she dishes out thrilling, exhilarating pop-rock with sizzling oomph.