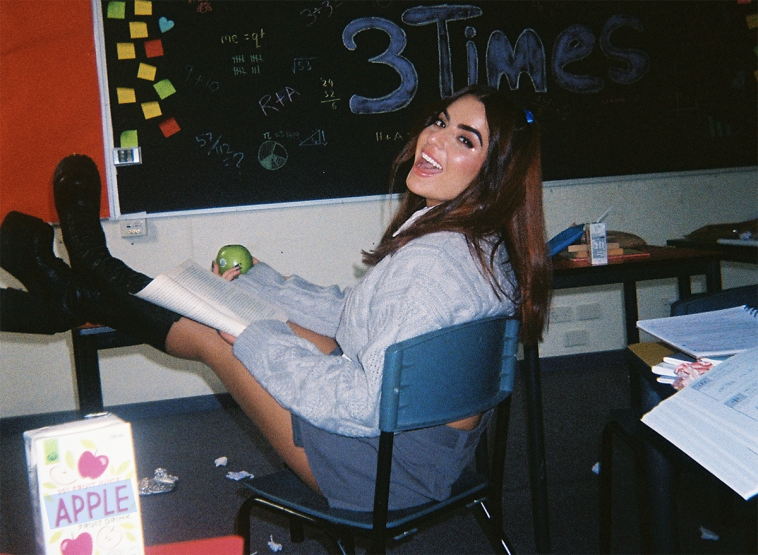 Following on from the release of RARIA’s ‘Happy Sad‘ EP earlier in the year, Australia’s fastest rising pop artist has returned with ‘3 Times’, a song that sees the upstart explore the acceptance of failed relationships.

To coincide with the release of her new song, RARIA has given fans a visual take on her anthem, full of pop-punk attitude and table-jumping goodness. “I remember the day I was writing ‘3 Times’, I saw all the visuals in my head for it straight away,” RARIA says about the release of her newest single. “I chose to film the ‘3 Times’ music video at a school because my first two heartbreaks happened while I was young at school and I was always falling for the ‘bad boys’ so it only felt right to go back to that era.”

You’d be remiss to overlook the fact RARIA has been able to seamlessly incorporate her strongest aspects throughout the entirety of her song: lyrical prowess and charming, bright aesthetics. Although, this song further emphasises that time in people’s lives can make them feel uneasy.

“I’ve been in three serious relationships and been heartbroken all three times in the space of six years,” RARIA says about the story of her song. “It’s fair to say that I’m over it and too busy for a fourth time!!! I wanted to write a song that anybody who is over-searching for ’the one’ can scream at the top of their lungs. It’s okay to be sick and tired of having failed relationships!”