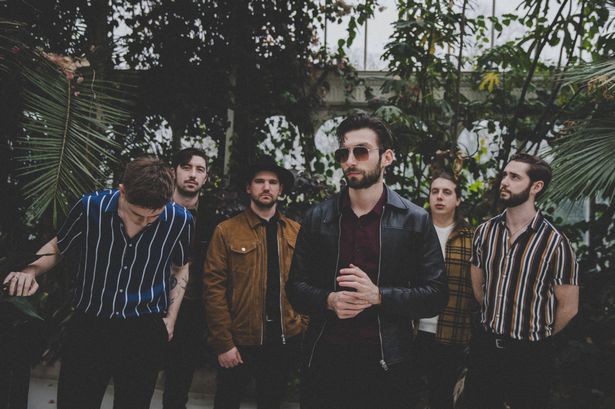 The lead single ‘Eleanor’ has been playlisted by BBC Radio 2 and their latest single ‘Ballerino’ has received a plethora of industry plaudits. The group have also announced a UK tour for early next year that will include an eagerly-awaited homecoming show at Liverpool’s Mountford Hall.

The group are rising fast, and are tipped to become one of the hottest breakthrough acts of the year.

We picked up the phone and had a chat with the group’s frontman Fran Doran, where we dived headfirst into the making of the band’s forthcoming album.

Where did the writing for the album take place? Did you have everything ready before heading into the studio, or was it put together when you got in there?

It was mainly written on the road. Last year we had a mad touring schedule doing loads of festivals and such and we had a few ideas bouncing around from when we were back in our own studio at home just messing about. We took those ideas that we had at home and they seemed to come together while we were on tour buses or at the side of the road. It’s mainly our guitarist Tom- whose my cousin- who sort of puts all the pieces of the songs together, but it can be strange because we often forget were they started due to our mad schedule.

So was there a clear idea as to what you guys wanted the album to sound like?

And was the ‘Matador’ sound still at the front of your mind’s? Or was it a case of let’s do something new?

We still wanted to keep the ‘Matador’ sound and especially the guitars, melodies and the sing-along vibes, but, when we got to the studio we decided to add some stuff in, so it’s like ‘Matador’ with a bit of salt and pepper and a cherry on top. We definitely weren’t scared of changing things up a bit because we gained a lot of confidence from touring and we knew what we were doing was working, and so this time around if we liked something it got added because the things that we liked before, other people seemed to like as well.

And with it being the daunting second album, did you guys put a lot of pressure on yourselves?

To be honest, yes, there was a lot of pressure. But it made the end result better because we were being more brutal on ourselves. If we weren’t sure about how something sounded then we just got rid of it. It’s probably why none of the songs on the album were leftover from album one because we were very conscious that if it didn’t make the first album then it shouldn’t make the second.

That can often be the problem with a lot of bands, and it’s very easy to pick up on because the quality simply isn’t there.

It’s that thing of because they’ve got an album they think that they can get a way with one or two filler tracks and they don’t think it matters, but you’ve got to want it otherwise what’s the point.

So what is it that excites you the most about the new stuff?

I think the groove on this album is the stand-out for me and the fact that we have been able to deliver the songs as more of a professional outfit. It’s not that the ‘Matador’ songs didn’t deserve to be on the big stage or anything, but these tracks are definitely a lot more grown-up, and a lot more full sounding.

From listening to the album, we can definitely concur. The choruses in particular are massive.

I think that’s because this time around we weren’t scared. We knew that these new songs deserved to be played on the big stage and so if there were ten backing vocals or a big orchestra part then we could add it.

So as a band, what do you think are some of the biggest progressions that you have made?

I think the main one has been just ditching the ego- which happened before the release of ‘Matador’- and just gaining more confidence. We realised over time that our audience was thinking the same things that we were, and so if we wanted to write a song about toxic masculinity or a girlfriend then we shouldn’t be ashamed of that. We are just a lot more confident in what we are saying.

We were reading that the album’s title ‘The Hollow of Humdrum’ refers to the vices that we use to escape from everyday life. Is this a strong theme in the album’s lyrics?

Yeah, the songs are about how everyday life is not full of sunshine and strawberries and cream. A lot of us are just trying to find different ways to escape from reality and although it might seem like quite an obvious observation we just wanted to give it our own unique phrase.

Speaking of unique, your music is certainly like nothing else we have heard before.

Thank you! That’s what we think as well. Geographically, we are up here in Liverpool doing our own thing and we feel almost in our own little bubble which gives us a licence to do things differently. If it doesn’t fit the trend then that’s okay because there are people out there listening.

Bands from Liverpool have always had a unique take on things from the likes of The Beatles and Echo & The Bunnymen to Frankie Goes to Hollywood.

For me, I think it’s that working-class disconnect. Even if you look at bands like Oasis, who came out with a totally different sound from what anyone else was doing at the time, and they just blew up because all of the working-class kids were like, ‘that’s exactly how I’m feeling.’

So would you say being from Liverpool has helped shape your music?

I don’t think Liverpool as a place has helped shape us. We are all musically educated and from a young age we were introduced to bands with guitars, and so like most of us, it just became a part of our DNA. But I suppose with Liverpool we like music because we’re good at it (laughs). You definitely get well trained in it.

Right now there is a lot of hype surrounding the band. What do you think started it all off?

We released ‘Matador’, which was just us throwing together some songs, and then there was a lot of hard work that came after that. Once we released the album, we jumped on the road and just toured non-stop, and so I think it was that hard work that got us noticed. Last year we were playing lots of festivals and just being in peoples faces until they couldn’t ignore us.

And that is something that we find special because a lot of artists these days seem to skip out on the hard work and achieve this sort of overnight success.

Don’t get me wrong, there’s nothing wrong with doing that but you can’t rely on that. If you’ve worked hard getting ten million streams or something then that’s great, but as a musician, you can’t rest on it. You’ve got to get out there and do the live shows. People are invested more when they see your face and I think they are more likely to buy a ticket the second time around.

So you recorded the new album at Parr Street Studios in Liverpool which is somewhat of a musical institution. Was it always a no-brainer that you would record the album there?

Yeah, what happened was we’ve worked with Chris Taylor who is the owner of the studio since day one. We were just playing a lot of local gigs and we weren’t that good but we were okay, and so Chris approached us and said I’ve got three days for you in the studio so give me three songs and I’ll record them for free, and then if you get signed, you guys come back to me and use my studio. And so that’s what happened.

You’ve announced your UK tour dates for early next year, which must be exciting given the uncertainty that live shows have been facing.

We’re still holding our breath a little bit but yeah, we are very excited. We’ve been back in the studio practising, making plans and it’s like coming out from hibernation.

You guys are often referred to as being a live band. Is that a characterisation that you welcome?

Yeah, but I hope that we’ve got other attributes. I mean we love playing the live shows because that’s what being in a band is all about, but that doesn’t mean that we don’t want to be played on the radio as well. I want people to have the choice of if they want to see us live then come and see us live but if not, they can still get the same experience on the record.

And are there any special plans on the table for the Liverpool homecoming show?

We always do something special when we play Liverpool. Last September we sold out the O2 Academy and we had an after-party where we were able to catch up with all of the fans, but the upcoming show is too far away to even think about (laughs).

To finish then, give our readers three reasons why they should buy the new record when it comes out…

It’s uplifting, it’s meaningful, and it’s probably the best album that will come out this year.

‘The Hollow of Humdrum’ will be released via Modern Sky on October 2nd. Pre-order here.

For the latest on Red Rum Club: