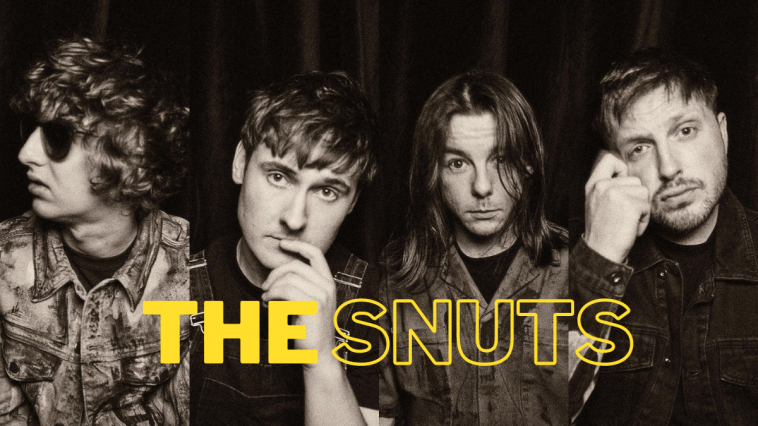 Rising Scottish rock stars The Snuts have returned with their brand new sophomore studio album, Burn The Empire, released via Parlophone Records/Elektra Records on October 7, 2022. Burn The Empire follows the success of the band’s debut album, marking a fearless transformation that makes an assertive statement about their future and encapsulates the band’s journey from four working-class kids growing up with a dream in Whitburn, West Lothian, to becoming one of the UK’s most dynamic and promising bands of the new generation.

With millions of streams, top chart positions, reaping support and supporting mega artists like Louis Tomlinson and The Kooks on tour, an appearance and sync in a UK-wide multi-million pound Strongbow ad campaign, and a FIFA21 soundtrack sync under their belt, and on top of these, establishing themselves as the “Kings of Scotland,” as defined by the Daily Record, the Snuts have come a long way, weaving a hypnotizing discography with their hauntingly heartfelt anthems and festival-ready bangers.

As described by Jack Cochrane in a chat with NME, Burn The Empire “is just bonkers all the way through.” Talking about the inspiration behind the album, the Snuts’ frontman comments,

“The universe delivered us time to create a record where we finally felt we could address some [of the] topics, be it societal or spiritual, that we have been dying to scream out. There are songs about the highs & lows, stuff we really want to talk about and things we cannot help but feel, but have just never made the space to.”

Burn The Empire erupts into energetic life with Jack Cochrane’s psychotically swirling vocals, cohesive melodies, and neatly addictive chorus as it mushes together diverse genres. The album meticulously veers from wishing to bring down everything with fun-driven pop to preaching benevolent understanding through socially conscious narratives, while maintaining its focus, confidence, and conviction throughout the record.

It starts with a speech from British political firebrand Tony Benn, who explains that “an educated, healthy, and confident nation is harder to govern” before the quagmire, punk-infused title track follows the suit. “I won’t take a backseat. No fucking way, man,” croons Cochrane as he whips up the protest. On the opening title track, the not-so-subtle “Zuckerpunch,” and “Cosmic Electronica,” which remembers a time when “that phone in your pocket just had a few games,” you can hear the social media angst and wistful nostalgia reminiscing the old era of pre-internet world.

The songs are sassy and take aim at politicians and ruthless and immoral multinational firms, as well as screen fatigue and the absence of mental health facilities in the nation. Sure, it feels overly political here, but someone has to say something to get the conversation going.

The recent feel-good, laid-back, and jovial single, “Knuckles,” although wide open to interpretation, is an ode to the strong female spirit and explores the depths of their resilience, tenacity, and strength. “It’s a new age indie tune designed for letting loose,” as described by Cochrane. From the hammering, head-bopping, hook-laden “The Rodeo,” to the gorgeous duet on “End Of The Road,” featuring ethereal vocals of Rachel Chinouriri oozing with optimism, to the soaring acoustic number, “Yesterday,” to the guitar-laden “Pigeons In New York,” encouraging unity to bring the change for a better future, the album is a masterfully crafted work of art, brimming with honest and euphoric tunes, that portray the contemporary world with a vision for the future.

The rock band has gone a long way since its inception, and the most recent album is an unmistakable testimony of its growth and evolution. Burn The Empire has more swagger; it is incisive, poignant, and suave, drawing influence from the legendary Arctic Monkeys, and oozes ferocious intensity, raising issues affecting modern youth and sparking a debate. Overall, the album has enthralled fans and critics all over as it leaves a lasting impression and feels like the staging ground for The Snuts’ musical empire in the coming years.

BURN THE EMPIRE is available on all digital streaming platforms. Listen to the album here!

The Snuts are currently on their headline tour across the UK. Check the dates and grab your tickets here before they’re all sold out.