Is it possible that the difference between being a seemingly overnight sensation in the art world and running under the radar for years be a Heinz or Campbell’s soup label? If you ask Robert Cenedella, the answer leans towards yes. See, Robert was painting soup cans before Andy Warhol but he’s just now getting the recognition he deserves and he says even after so many years, he’d still pick Heinz over Campbell’s. 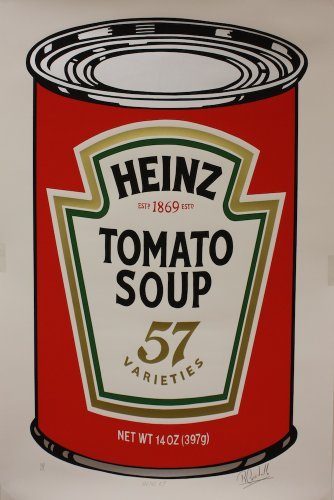 Robert Cendella is the most talked about artist you may not have heard of until recently, but after a few moments of researching his story, we were enthralled. We’re sure you will be too. It’s not just the art that makes Robert so interesting, it’s his passion for satire and how that’s played into many aspects of his life. As a young adult, Robert was expelled from The High School of Music and Art in New York for writing a satirical letter on the atom bomb drill and presenting it to the school’s principal.

He now stands as the most talked about satirical artist, clearly never having lost his touch, and he’s used his talent to describe what he sees around him; even if other artists won’t or aren’t doing the same.

“It’s not what they show that bothers me, it’s what they don’t show.”

His pieces; like Unpopular Decision, Southern Dogs, and Battlefield of Energy tell stories that some may avoid completely when it comes to a work environment, but he embraces them and paints life as he sees it;and even if what’s going on isn’t in the forefront of society at the time, it’s relevant enough for Robert to want it to be remembered, and with good reason.

If we only glamorize life, it’s not real and if we aren’t willing to get real about life, we can’t make the necessary changes to move forward.

We got to speak to Robert, in one of our most interesting interviews to date, about what it’s like to not conform and the film Art Bastard which tells the story of his life.

In our interview, Robert spoke candidly calling himself a ‘bastard’ but making it relatable. He felt like he didn’t have a place to fit in, he didn’t want to victimize himself but he was, in fact, illegitimate and he wasn’t going to change his art just to make it popular. It was a job in itself to figure out how to make sure his message was still received – full of emotion – and done so in a way to make us have to think.

The film, Art Bastard, goes into detail about Robert and it’s already taken home a number of awards at film festivals in 2015 and 2016. It’s caused a stir in the art world and now, you can view it too and likely find a piece of yourself in Robert’s story.

Check out the trailer for Art Bastard here and tweet us at @CelebMix and let us know which work of art is your favorite, and what you think of Robert’s story.