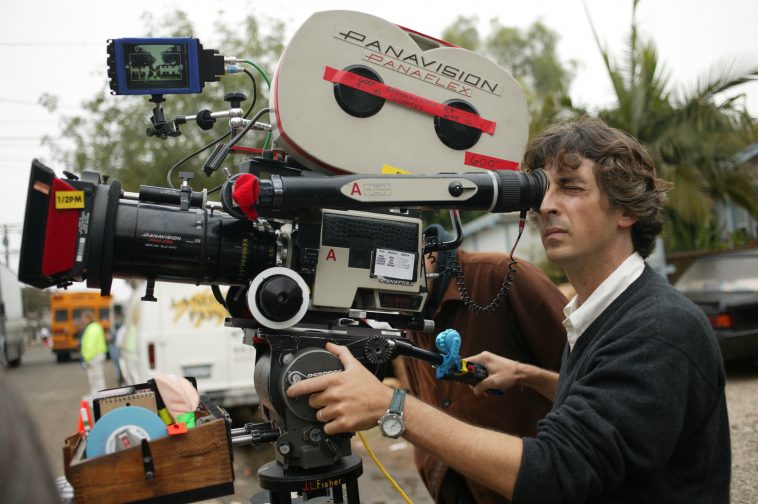 What does it take to write and direct an idiosyncratic but commercial feature film? Aside from technical chops and writing talent, a filmmaker needs to be a leader, marketer, and artist. No one knows this better than Alexander Payne, the writer and director behind beloved quirky, dark comedies like Sideways, Nebraska, and Election.

Although he’s a film industry veteran with three decades of experience, Payne admits it’s a challenging career. From financing to writing to baring your soul for millions on the screen, filmmaking is a tough gig.

So how does Alexander Payne’s experience as a filmmaker shape him, help him overcome the daily challenges of creative work, and propel him with the belief that his best work is yet to come?

Born in Omaha, Nebraska, Alexander Payne is one of America’s most celebrated writers and directors. A known contrarian in the filmmaking industry, Payne fights for the ability to tell stories that celebrate the wackiness and banality of everyday life.

Over the last 25 years, Payne’s films have been nominated for 19 Academy Awards, including three nominations for Best Director and two wins for Best Adapted Screenplay (Sideways and The Descendants).

Although he has seven features under his belt, Payne considers himself a lifelong learner in the art of filmmaking, and in a difficult industry like Hollywood filmmaking, he knows it’s been far from easy to carve out a place of his own. Payne shares the joy of his successes, as well as the uphill battles he fights, to write and direct his very personal films.

Repetition and Building a Body of Work

After the release of Downsizing in 2017, critics accused Payne – and Payne even accused himself — of writing a version of a story he’d told before. “Oh, once again you have made the middle-aged white Midwestern male in some sort of crisis,” Payne says. “This movie is disappointingly similar to my previous films. It has the schnook from Omaha who gets lost and has things taken away from him.”

From its science-fictional premise to its heavy use of visual effects, Downsizing stretched Payne’s artistic boundaries—even if the film still centered around an everyman from Omaha. Although there are similarities between Payne’s films, he still sees Downsizing as a natural progression of his work. “This film sums up a lot of the themes that Jim Taylor and I, as writers and directors, have worked on in the previous six films,” he explains.

Payne isn’t shy about addressing the darker side of Hollywood. Like many, he says that financing is by far the most difficult obstacle to releasing interesting films.

“I had a good thesis film experience coming out of UCLA. The next day, your answering machine is clogged with messages from producers and agents,” Payne explains. But in Hollywood, with its short memory, he realized he needed to take advantage of the spotlight to get future screenplays financed.

After the surprising success of Sideways, several financiers approached him to do other projects, but they frequently dismissed his ideas as too new, too different, or too intelligent. “I am praised for films they never would have financed,” he says. It’s a hypocritical standard that’s all too common in an industry that revolves around cash.

While some filmmakers love rewatching their projects, Payne isn’t a fan. “I don’t care if I see Downsizing again because I’ve seen it so many damn times,” he says.

The core of the problem, however, is catching the mistakes he believes he’s made. “When I watch my movies again, I only see mistakes,” Payne says. In his opinion, Election has the fewest mistakes.

Payne prefers to focus his energy on the future. “I see each film not as an accomplishment, but as another lesson. So, I’m still learning,” he says. As a lifelong student in the art of film, Payne sees each “mistake” as a teachable moment that will help him create better films.

“I’m still a student. I’m going to die not really knowing how to make a film, and I really mean that,” Payne adds. He acknowledges when he doesn’t know what to do. Instead of digging in his heels, he collaborates with others on set, which he says leads to better movies.

Before film school, Payne wasn’t sure if his love of watching movies would translate into a talent for making movies. He attended UCLA film school and wanted to see what would happen. Payne knew he wanted to reproduce human behavior on film with digestible, thoughtful, and comedic storylines.

“I didn’t know if I wanted to be a director or if I would have the talent or luck to be able to do so,” he explains. The success of his student film at UCLA proved he had talent that appealed to other people in the industry.

“There are many filmmakers who do beautiful, honest work, but it doesn’t appeal to a sufficient number of other people,” Payne says. “There were colleagues in film school more possessed of an art spirit than I.”

If skill and artistry don’t translate into commercial success, then what’s the key? In Payne’s experience, it comes down to two things, “salesmanship and feigning confidence even when you don’t have it,” he says. “One of the keys to leadership is masking inner panic. It comes back to the classic trope. ‘Fake it ‘til you make it.’“ If you, as the director, are panicking on set, your actors, crew, and everyone else on set will mirror that panic. It is the job of the director to direct the film, yes, but it is also the job of the director to ensure everyone keeps a level head so the movie can be made.

The Academy Award-nominated director has decades of experience in film, but he still thinks he has better stories to tell. “I hope I make a good film in ten years. One that I think is good,” Payne explains.

He believes that writers and directors have to dig deeper and tap into true vulnerability to make more innovative films. Payne says inner embarrassment can turn into art with the right touch. “I want to do something that pulls out my insides, a confessional that’s revealing and interesting,” he says.  “I feel like I’m just getting started,” Payne adds. “You don’t want to die with unrealized potential, and the potential lies inside of you.”

Commercial success doesn’t have to look like selling out. His creative process may be unconventional, but Payne learned to be a collaborative leader in his years in film. By balancing Hollywood’s rigid standards and his own kooky ideas, Alexander Payne brings contrarian films to the silver screen for everyone to enjoy.