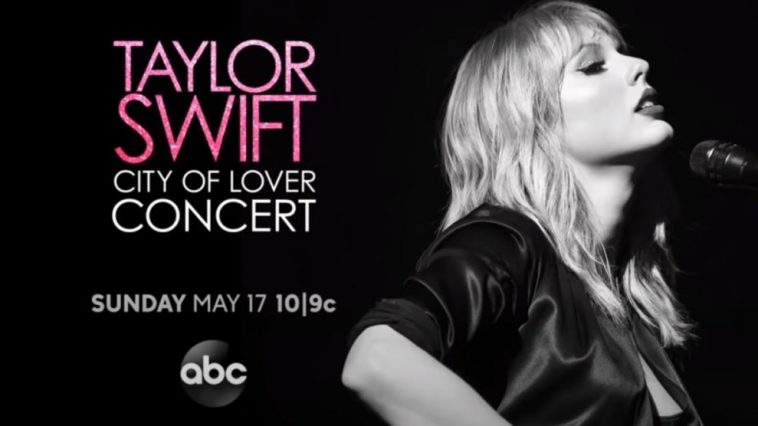 Taylor Swift’s Loverfest tour was cancelled this Summer due to the coronavirus pandemic. Now she is giving fans the chance to see her perform those songs as ‘Taylor Swift City of Lover” will premiere on ABC on May 17th at 10/9c.

The concert was filmed in Paris, France, at the L’Olympia Theater, in September 2019 and will now be shown to everyone for the first time. Fans from 37 countries attended the show to listen to Swift perform songs from her album, “Lover” and back catalog.

However, if you miss the concert on the 17th, don’t worry because it will be available on demand on Hulu and Disney+. This is a different direction for Swift as her previous films premiered on Netflix.

Her LoverFest tour has been rescheduled to 2021, with dates yet to be announced.

Many fans thought that Swift was going to announce something on May 8th because 5/8 kept popping up everywhere and they were right. Just call Swifties the detectives of the internet!

Make sure you follow @TS7Track3 on Twitter to see all of the theories relating to the 5/8 release.

Many fans also thought Swift was teasing a collboration with Katy Perry as she posted a photo of herself wearing a sweater with daisies on it, hours after Perry announced her new single, “Daisies,” on the second anniversary of Perry sending her a literal olive branch.

Maybe there is something coming. Maybe it is just women supporting women. Or maybe it was a coincidence. We are here for it in any sense.

Swift has been keeping quiet during this quarantine except for performing at the “One World: Together At Home” special to perform “Soon You’ll Get Better” for the first time. She has also been donating $3,000 to Swifties who have been affected by this pandemic.

This announcement comes the same day that Big Machine Records removed all of Swift’s albums from her Spotify page and kept the Big Machine specials on it. Her albums are still there however, you just have to search them. #TaylorSwiftSpotify trended on Twitter and soon enough, her albums were all back on her page.

So stay at home, stay safe and make sure you tune in to “Taylor Swift City of Lover” for a night of great music.

We are so excited for “Taylor Swift City of Lover.” Tweet us about yours at @CelebMix.