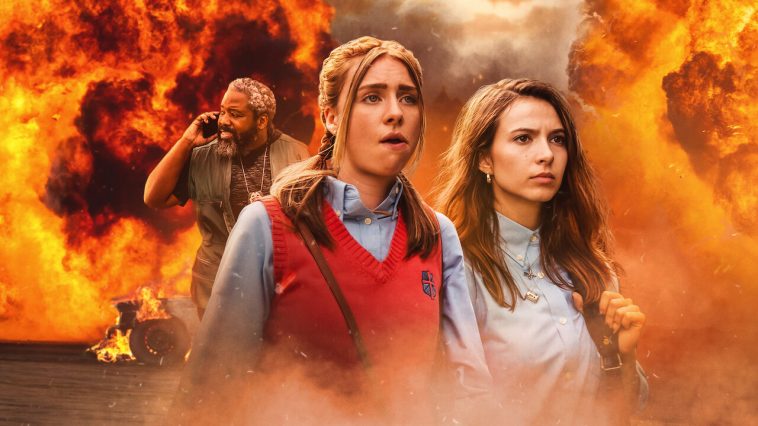 “Teenage Bounty Hunters” had quietly been out a little over a month until a fan-made streaming party launched the show into a trending topic.

The series hasn’t been a leading contender for Netflix’s promotional efforts. However, it squeaked its way into the top 10 most viewed in its opening weeks with 422 million streaming minutes. A loyal and passionate fanbase has since formed, leading a serious campaign for the show’s renewal.

#TeenageBountyParty took over Twitter on Saturday afternoon, as the show’s cast, along with its fans, joined forces to collectively stream the second half of its 10 episode first season.

“Teenage Bounty Hunters” focuses on 16-year-old fraternal twin sisters, Sterling (Maddie Phillips) and Blair Wesley (Anjelica Bette Fellini), as they stumble into the world of bounty hunting while navigating the ups and downs of Willingham Academy, their private Christian high school. Although that might sound like a strange combination, it is what keeps “Teenage Bounty Hunters” fresh and exciting in a world full of teen revolving dramas.

The series, created by Kathleen Jordan, takes on a different tone than your usual high school tale. The show leans into being witty and quirky with perfectly timed improvised one-liners, while still keeping you on the edge of your seat with its drama.

The chemistry between Phillips and Fellini shines throughout, whether it be in a loving moment between two sisters or bickering at it’s most brutal. Kadeem Hardison, who plays Bowser Jenkins, a veteran bounty hunter and the girls’ reluctant mentor, is another gem in the series. He takes the twins under his wing to teach them the job’s ins and outs while also giving the occasional bit of life advice.

The Wesley twins are on a wild ride of self-discovery in a community that often pressures these teens to strive for a level of perfection. They’re modern-day teens exploring sexuality, political issues, and their religious upbringing while diving into the potential dangers of tracking bail-skipping bad guys.

“Teenage Bounty Hunters” will surely give you a few laughs and leave you wanting more after its cliffhanger finale.

Check it out and let us know what you think @CelebMix on Twitter!