Sherlock as been one of Britain’s most popular TV shows for the last six years, with each 10 episodes gaining over 8 million views. The series, which hasn’t had a new episode since mid January 2014, returned last night for it’s Christmas special.

The Victorian-set special entitled The Abominable Bride starts with a simple recap of the past nine episodes that one would think to be completely unnecessary as this is a stand alone episode, however it later transpires it is very necessary.

The first Victorian scene is from A Study in Scarlett, the first book in the Conan Doyle series, where Sherlock Holmes (Benedict Cumberbatch) and John Watson (Martin Freeman) first meet after Watson returns from Afghanistan and is in need of a flat mate. This scene is exactly how I imagined it to be whilst reading the book and is just as funny and heart-warming. It is also a great scene as it showcases what an ‘odd’ man Holmes is.

After the newly fashioned title sequence, we see Holmes and Watson return to 221B Baker Street in a horse and cart and are greeted by landlady Mrs. Hudson (Una Stubbs) before heading to the main living room where a woman, dressed in black is stood. Holmes soon deduces from her perfume alone that it is Watson’s wife, Mary Watson (Amanda Abbington.) After the two have a short domestic and Holmes plays what is known as ‘John and Mary’s song’ (featured in The Sign of Three) on his violin, Sherlock speaks to himself, seeming to be deep in his mind palace, then asking Lestrade (Rupert Graves) into the flat without even seeing it is him, only knowing from the heaviness of his step. Watson gives Lestrade a drink which is swiftly consumed before Holmes begins to deduce what Lestrade’s problem is. He misdiagnoses the police officer as being embarrassed, Watson correcting him as being afraid instead. Lestrade then begins to explain to the men what is wrong.

We see a woman stood on a balcony dressed in a white wedding gown holding two pistols. Lipstick is smeared over her white face and she is shouting ‘you’ whilst aiming at men who scurry past her. This is the first indication we get of her being the abominable bride. It’s all very confusing, especially when we see that the four and half the room is on the street. Lestrade soon announces that the woman killed herself and her name is Emilia Ricoletti (Natasha O’Keeffe.) All is fine until it is spoken that later that night, she appeared from a horse and trap and shoots dead her husband.

These scenes are all rather good and well written but rather boring for Sherlock. I appreciate that it is all just setting the story up and making the view begin to start wondering how she did it and if this is perhaps something to do with James Moriarty (Andrew Scott) who killed himself in a very similar way. All is very convincing but the addition of Holmes’ lounge being on the street takes away some of the fear in my opinion and it all seems a bit silly. Watson and Holmes then travel with Lestrade to see the body of Mrs Ricoletti. After Anderson (Jonathan Aris) and Hooper (Louise Brealey) ask Holmes and Watson to leave, Lestrade however forces Hooper to tell Holmes what the main points of interest were on the body, one being that there was blood on her finger and ‘you’ smeared across the wall in blood. This is when the first odd moment comes. Sherlock asks how he did it, rather than she. This can quickly be linked to Moriarty, who is seemingly alive after killing himself in a similar way to Emilia at the end of The Reichenbach Fall, as previously mentioned. Whilst this could be a coincidence, it is more of an indication that Sherlock is instead in his mind palace to try and work out how Moriarty survived.

The first of the many funny moments of the show comes when Holmes and Watson visit Holmes’ brother Mycroft (Mark Gatiss) and Watson attempts to speak in sign language, accidentally calling the footman ugly and telling him he is ‘glad he liked his potato.’ The pair then go inside and meet Holmes’ brother who is then announced to have only a few years left to live as he continues to gorge himself in fine food. This could, however, be an indication that Mycroft doesn’t have long to live in real life if the entire story is just in Holmes’ mind palace.

After this we meet Lady Carmichael (Catharine McCormack) who tells Holmes and Watson that her husband is to die that night after they saw Emilia in their labyrinth. They then travel to the mansion where they meet Eustace, her husband. He, however,brushes the whole affair off as a joke and that he’s not worried about the fact he may die.  Sherlock then tricks him into revealing the fact he knows of Ricoletti and Sherlock immediately believes she has something to do with it. The pair then decide to stay at the Carmichael house for the night to catch the murderer. The scene of the mansion during the night reminds me of Eel Marsh house in The Woman in Black which is rather ironic. 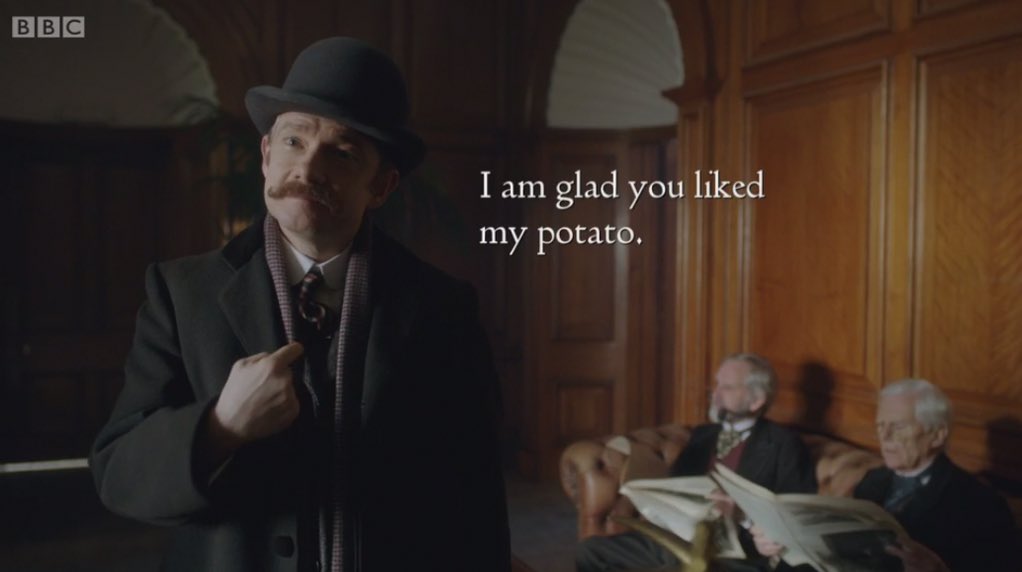 We then see Holmes and Watson in the shed of the house and Watson grills Holmes on his sex life and questions why he has a photo of Irene Adler in his pocket watch. Their discussion is quickly ended when they see the ghost of Mrs Ricoletti. There is then a scream from upstairs and the shattering of glass. The pair quickly break a window and go inside before Holmes heads straight to where Eustace is supposed to be but he is found with a dagger to the chest.

Watson is then approached by the ‘ghost’ of Mrs Ricoletti and he panics, running to find Sherlock. This, however, gives time for the bride to escape through the smashed window and Sherlock angrily yells at John for letting the bride escape.

We then skip to the next morning and find that the force applied to the dagger must mean that the killer is a man. Lestrade then says that there is a note left with the body. Holmes reads it and then staggers away in shock, immediately leaving the building. Watson then goes to read the note and we see that it says ‘miss me,’ the line Moriarty is famous for saying at the end of His Last Vow. It is at this point everything gets a lot odder.

We see Holmes back at his flat produce a syringe from a box, presuming this means he is to inject himself with cocaine or heroin. We then hear the voice of Moriarty and he appears from the shadows. He then says he has slept in Holmes’ bed and licks off some of the dust that was on the mantel piece in an almost erotic manner, Moriarty then twists his words to make Holmes realise that all of this really is to find out how he survived. Moriarty then shoots himself in the mouth once more and immediately comes back to life. The entire room shakes before we see the plane landing and modern day Sherlock comes back. Mycroft then asks for Sherlock’s list of drugs he has taken and says that he was high before he even got on the plane, something rather sweet as it suggests he had to be high to say goodbye to John.

We then go back to Victorian Sherlock and find Holmes passed out on the lounge floor with Watson trying to wake him up after an apparent overdose. A telegram is then given to Holmes and he reveals that Mary is in danger. They then take a taxi to an abandoned church where Mary is and she reveals that she is a spy. They then travel inside the church where there is a meeting that resembles that of the KKK. Holmes then tells them all how Mrs Ricoletti faked her death, this presumably being how Jim also faked his death. The people around Holmes then all take off their masks to revel that they are the suffrages, including Molly Hooper and Janine Donlevy (Yasmine Akram.)

The women announce that it was in fact them that had been them dressing up as Emilia to scare the men. Holmes immediately believes that the suspect in the case is Lady Carmichael. The bride appears from behind Holmes and lifts the veil to revel it is Moriarty. This is then seen to be another of high Sherlock’s visions and he returns to normal.

Sherlock immediately asks to see Emilia’s grave and they travel to it. John and Mary travel home, leaving Sherlock and Greg to dig the coffin up. Sherlock jumps straight back in to dig up the second body however the dead body of Emilia then jumps out of the coffin, just as he travels back to the Reichenbach Falls where Moriarty is once more waiting for him. Moriarty then describes himself as the virus in Holmes’ mind as Holmes seemingly begins to flirt with him before calling him ‘short-ass.’ This causes Moriarty to hiss at him and then attack him, the two fighting on the edge of the waterfall. Moriarty begins to kick and hit Holmes as he is laying half off the edge of the crag. Watson then clears his throat from behind them and asks Moriarty to get on his knees. Watson and Holmes have a quick flirt before Moriarty mutters ‘Why don’t you both just elope for gods sake’, causing Watson to kick him off the edge of the waterfall, Holmes soon following so he can finally wake up from his high.

Once awake again, Sherlock speaks that Jim is in fact dead and that there is no way he can survive shooting himself before the fake credits begin.

We then go back to Victorian times which, once more, confuses the story and gives the viewer even more ideas that the whole thing was just a story created whilst Holmes was high. 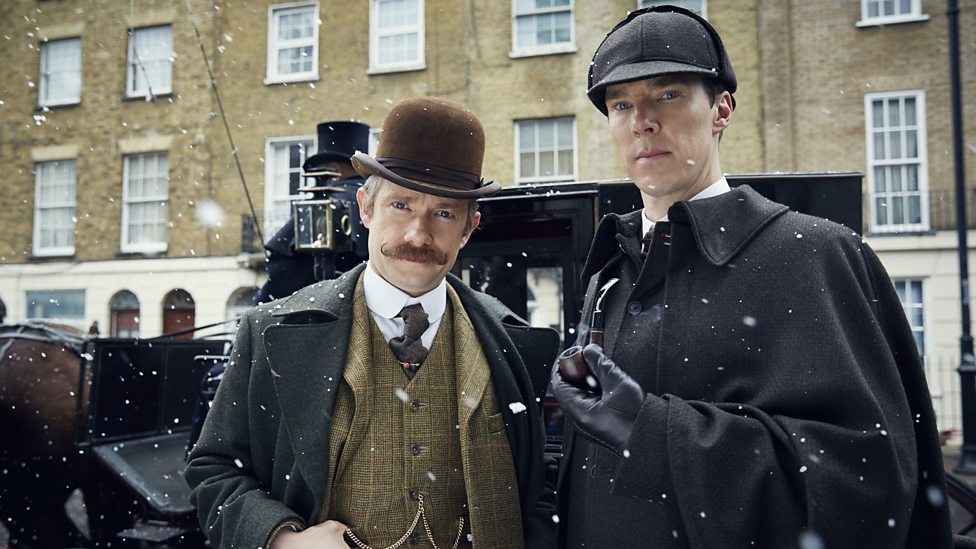 As a massive Sherlock fan, I must say I believe The Abominable Bride is the best Sherlock episode, even beating Reichenbach in my opinion. It’s full of heart stopping, hilarious and frankly brilliant one liners which are all essentials in Sherlock. My only criticism is that I find the end half an hour very confusing as the switches are too quick and it’s difficult to know what world is true, although this is most probably the main idea of the show as Gatiss and Moffat regularly make their shows rather confusing. But all in all, this entire episode was about Jim Moriarty and I’m not complaining.

My personal favourite performance was from Andrew Scott during the scene in Holmes’ lounge. It was both beautiful and hideous with some very witty one liners from Scott. Although the acting from all in the program was wonderful, especially that of Cumberbatch who really plays the part of Holmes brilliantly.

Overall, the episode was brilliant and by far my favourite ever episode.