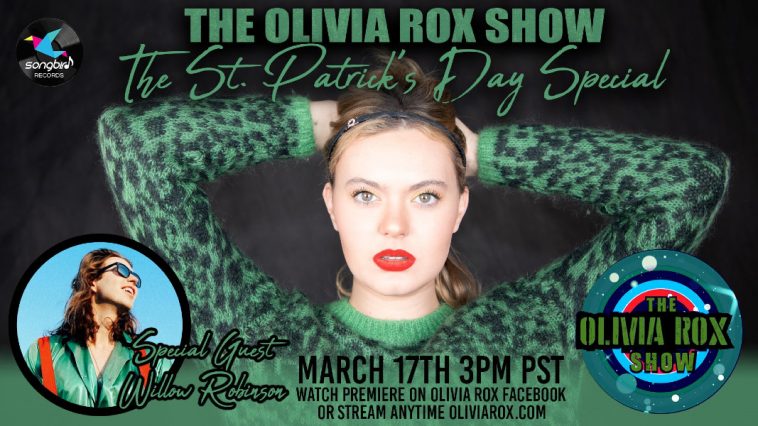 Top 40 pop singer-songwriter and online personality Olivia Rox will premiere a special edition of The Olivia Rox Show – “The St. Patrick’s Day Special!” – on March 17, beginning at 3 p.m. in California (PST) and 6 p.m. on the East Coast (EST).

Olivia will talk with Willow about his career and music, followed by Olivia and Willow performing their dazzling version of Paul McCartney’s “Maybe I’m Amazed.” Viewers can interact with both Olivia and Willow during the live Q&A.

If that’s not enough to slake your entertainment desires, Olivia will perform two of her unreleased original songs – “Best Days” and “Perception Is Reality.” She will also demonstrate how to pour the perfect Irish beer, a technique she picked up while on tour in Dublin at the Guinness Storehouse.

Next up is the exclusive sneak peek of Olivia’s brand-new music video “Go For It,” a live action, animated video filmed in Canada at a summer cottage. Inspired by the movie Snow White, the video will officially premiere on YouTube on March 19.

Olivia has toured throughout the U.S. and the rest of the world, performing in Asia, Europe, Canada, and Mexico. During the pandemic, Olivia began streaming The Olivia Rox Show, amassing more than 2 million followers, as well as releasing her album, Just A Girl & Her Guitar.

Ever creative with a flair for turning out infectiously memorable music, Olivia Rox continues to deliver irresistible songs and refreshing entertainment.