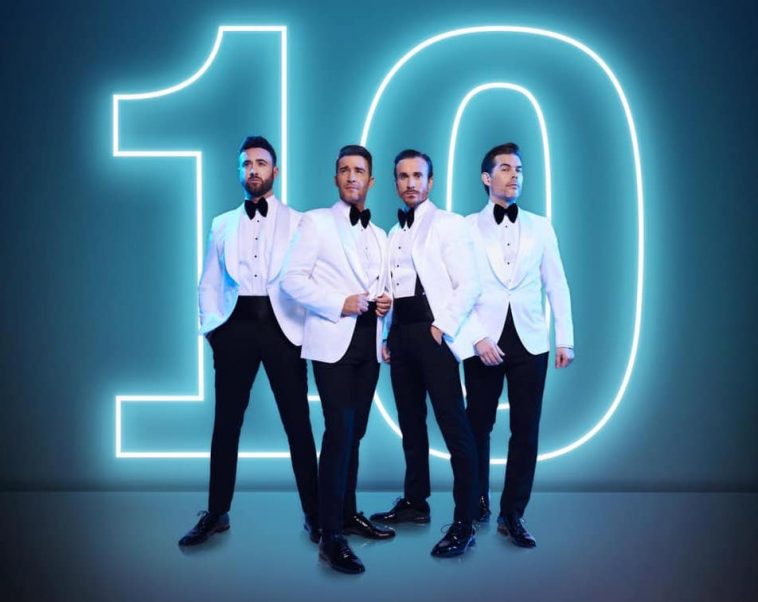 To commemorate 10 years in the music business, pop’s most sophisticated gentlemen The Overtones drop their latest album, 10.

Made up of nostalgic hits, original songs and two epic collaborations, including a special cover of Can’t Take My Eyes Off Of You with long-term friend of the band Michael Ball, along with a reimagined version the Simply Red classic Stars featuring West End star Marisha Wallace, the celebratory record manages to beautifully encapsulate everything fans have grown to love about the contemporary pop supergroup.

Available for purchase in 5 different formats, including CD, Digital, Cassette, Deluxe Digital and Deluxe CD, as well as a deluxe edition of the album which features extra tracks, a new neon pink sleeve and an exclusive track by track chat with Mark, Darren, Jay and Mike.

In a press release the band say of their 10th anniversary: “2021 is all about bringing back the feel good and that’s what The Overtones do best. As we celebrate the past, dance in the present and sing for the future, we are so excited and blessed to release 10 and give The Overtones family their best night yet on our forthcoming tour!”

To celebrate the albums release, the four piece will hit the road this coming November / December, to play 20 shows in some of the UK’s biggest cities including an extra special date at the indigo at The O2 in London.

Tickets for the tour are on sale now here.

The Overtones brand new album 10 is available to download / stream across all platforms now.