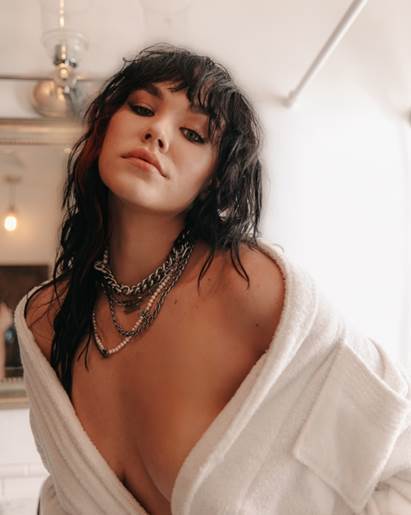 UPSAHL has released her latest single ‘Time of My Life. ” An introspective anthem off her debut album due out this October. The pensive track’s melodic hook and punchy chorus put UPSAHL’s addictive sound and songwriting prowess front and centre.

Directed by George Gallardo Kattah, the playful video juxtaposes present-day UPSAHL with a younger version of herself, allowing moments of childhood nostalgia to manifest in the now. Raw and vulnerable, UPSAHL invites viewers to tag along as she wonders, “How come all the worst days are in the time of my life?”

Of the song, UPSAHL explains, “I wrote “Time of my Life” about being the happiest I’ve ever been, while simultaneously being the saddest I’ve ever been. I’m at a place in my life where I feel like the highs are really really high, but on the flip side, it makes the impact of the lows even lower. The day we wrote this song, I had the line: “How come all the worst days are in the time of my life?” dancing around in my head… So we ended up making that the chorus and building the rest of the song around it.”

Of the video, she added, “For the music video, George, the director, and I really wanted to emphasize the nostalgia that this song sparks. Personally, I feel like some of my most reflective moments are in the shower, so we wanted the video to take place there, while flashing back to some of the best and worst moments of my life. We wanted it to feel very dramatic and introspective, so we shot the video on a high speed camera at 60-1000 frames per second to make it all look like it’s moving in slow motion.”

As well as releasing her own songs UPSAHL has penned numerous hits spanning various genres such as Dua Lipa’s “Good in Bed,” Madison Beer’s fiery single “BOYSHIT,” and most recently, she collaborated with Anne-Marie and Little Mix and co-wrote “Kiss My (Uh Oh). Her track “Stop” was also featured on episode 3 of HBO’s new Gossip Girl revival.

UPSAHL will perform a run of fall dates across the U.S. opening for Olivia O’Brien kicking off August 30th at The Observatory in Santa Ana, CA. She will also make her first-ever headline show debut at the Courtyard Theatre in London this autumn on October 12th.

Let us know what you think about Time Of My Life at @CelebMix!