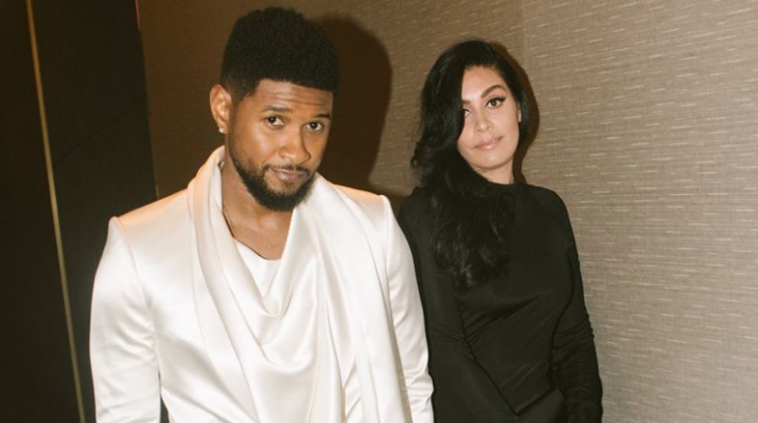 Usher is expecting his first child with girlfriend and music executive Jenn Goicoechea.

This announcement arrives as the duo prepares to celebrate their one-year anniversary as a couple. First spotted backstage at an event taking place at the Hollywood Bowl, the Grammy-award winning artist and highly established record executive were first linked back in October 2019. They have been inseparable ever since; attending countless A-List events, such as Diddy’s 50th birthday party, as well as exclusive after-parties together.

According to a source who opened up to US Weekly, which broke the news and confirmed the pregnancy in an exclusive story, both Usher and Goicoechea are “thrilled and very excited” for this new chapter in their lives.

The couple were spotted outside a production studio on August 31st where paparazzi got a first glimpse of Goicoechea’s baby bump.

Usher has been quarantining with his two sons, Usher and Naviyd, throughout the coronavirus pandemic. He shares those children with ex-wife Tameka Foster who he appears to be on good terms with currently. The pair decided to divorce in 2009 following their marriage just two years prior.

The “Yeah” singer’s relationship with Goicoechea follows his divorce with manager and girlfriend Grace Miguel in early 2018. After announcing their separation, Usher detailed the decision to split in a statement.

“We remain deeply connected, loving friends who will continue supporting each other through the next phases of our lives. The enormous amount of love and respect that we have for each other will only increase as we move forward,” He said.

This new pregnancy is the third child Usher will welcome into the world.

But this is not the first time that singer is making headlines in August. His apparent feud with The Weeknd drew the attention of countless music fans less than a week prior to this announcement.

In an interview with Variety, The Weeknd explained that Usher’s 2012 single “Climax” sounded like a song that would be released by The Weeknd himself.

“It was very flattering, and I knew I was doing something right, but I also got angry. But the older I got, I realized it’s a good thing,” He explained.

Not long afterward, Usher posted a video of himself singing “Climax” acapella on Instagram. And fans started taking over social media with rumors and theories almost instantly.

The so-called “beef” is now nonexistent between the two artists. In fact, The Weeknd opened up in a recent interview with Esquire about it.

“I hit him up to apologize and tell him that it was misconstrued. He’s one of the reasons why I make music. Definitely. No, no, I have nothing bad to say about Usher. The sweetest, most down-to-earth guy ever,” The Weeknd said.

While social media users let their imaginations initially run wild, the “Blinding Lights” singer has now clarified that all is well.

Congratulations to Usher and Jenn Goicoechea!