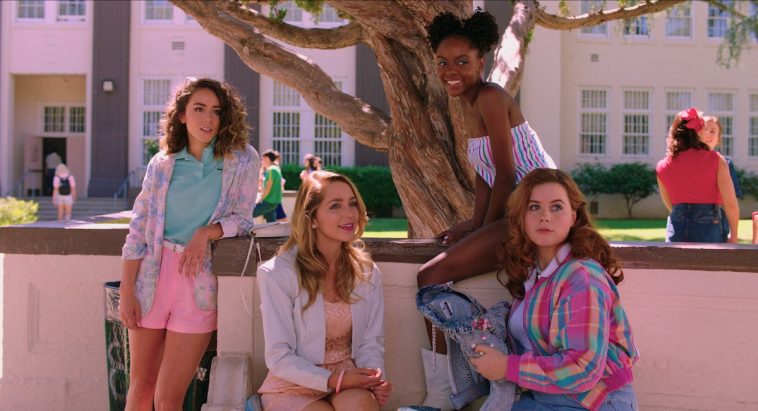 Southern California is full of cars, it’s quite impossible to get anywhere far without a car in Southern California actually. With everything so spread out, driving in cars is the prime time to catch up on the latest music releases, or news on podcasts.

Back in the 80’s though they didn’t have iPhones or podcasts to do that, they only had the radio. The cars were dominated by pop radio and the stations competed to be cutting edge and the top radio for people to listen to.  You can hear that in the original “Valley Girl,” a generation-defining opposites-attract romance that opens with a helicopter shot that pans from Hollywood, up over the hills, past a radio tower, to the San Fernando Valley. We hear the L.A.-based station fade out and the Valley-side DJ take over.

The movie Valley Girl, was basically wall-to-wall new wave discoveries, catchy, synth-powered songs from bands that hadn’t yet broken. The new version of Valley Girl however, is a musical that has overly produced dance choreographies but it’s fun to watch them with your friends for sure, 100%.

Plot-wise, this is still a film with just enough in common with “Romeo and Juliet” — two teens from rival “families” who, like, totally love each other — to justify its lead couple making out beneath a marquee touting Shakespeare’s tragedy.

After noticing one another at the beach, Jessica (played by “Happy Death Day” actor Jessica Rothe) and Randy (Josh Whitehouse) meet at a house party in the Valley, where she sneaks off with him to a night at an L.A.-side live-music club (Goldenberg recycles actual shots from the earlier film for the Hollywood cruising montage).

Overall the new version of the classic 1983 movie is a fun, nostalgic watch while being in quarantine.

Valley Girl is available to stream now on Amazon Prime.

Have you watched Valley Girl? Let us know what you think on Twitter @CelebMix