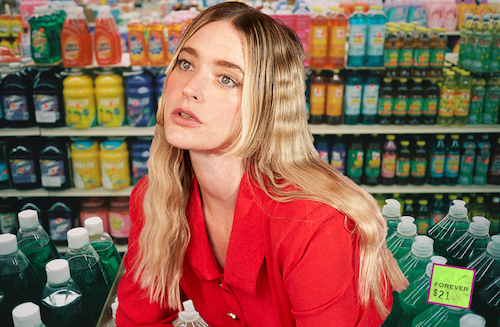 Number One Popstar is about setting yourself up for failure immediately, it takes the pressure off the entire project. Plus, easier to be number one right away. And, it gives the artist, behind the project more freedom to fail, “hopefully I will never be number one otherwise I’ll have to change my name,” Kate (Number One Popstar) tells CelebMix.

Number One Popstar is doing pretty good in 2021 so far, let alone the release of her new song, she is almost number one, but not quite yet, “I have a lot of great collaborations on the horizon,” she reveals to CelebMix, “including one with John Mayer.”

“I would say I feel like I’m literally forever 21 now that it’s out in the world,” Number One Popstar expresses on the release of her new song. “With each new song I reverse age and only grow stronger.”

Songs are my fountain of youth. I hope it brings lots of joy to all my Gen Y fans.

“Wait, there is a fashion store with the same name? FML,” Number One Popstar expresses to CelebMix after we point out the similarities. “Well, hold on I might have to change it one sec.”

Although, Number One Popstar’s Forever 21 is about trying to get back to that feeling of blissful naivety you have before life can harden you, “But you can actually tap into that feeling anytime,” she explains. “It’s also about death, and wishing you could go back in time to see people again, not necessarily being 21 (which I will be forever).”

The song started out more lighthearted, though, with Number One Popstar wanting to be dumb forever, but it evidently slowly evolved into a song more about loss and wishing you could go back in time.

In fact, Number One Popstar wanted to make a more sincere song, “Everything I’ve done thus far has had a satirical element to it,” she states. “I have to keep my fans confused and disoriented.”

This is a song that comes from a genuine place of wishing I could go back in time.

“When I was 21 my mom was dying of cancer and it was actually the worst time in my life, so in many ways I don’t wish I could go back,” Number One Popstar emphasises on the personal motivation of her song. “But there was a time when it’s all I could focus on. When you lose someone it often feels easier to redirect the blame on yourself so you can feel like you have some sort of control. But the truth is, you don’t.”

For years Number One Popstar had a lot of regrets wishing she’d been there more. And then when her dad passed away shortly after, she found herself once again cycling through feelings of regret, “I wanted to acknowledge that feeling of regret, of longing to change the past, but that gets you nowhere,” she continies. “With time comes perspective and growth. You have to live in the present, and always trust you did the best you could at the time.”

With this song, Number One Popstar would like listeners to live in the present. And reflect on the feeling that youth is always there, it’s just a matter of taping into it, “The Peter Pan effect is real. Also, that Forever 21 is a great place to shoplift from,” Number One Popstar adds.

Number One Popstar will be releasing another single soon, and that is about her desperate need to be famous, so she can finally be happy and loved!