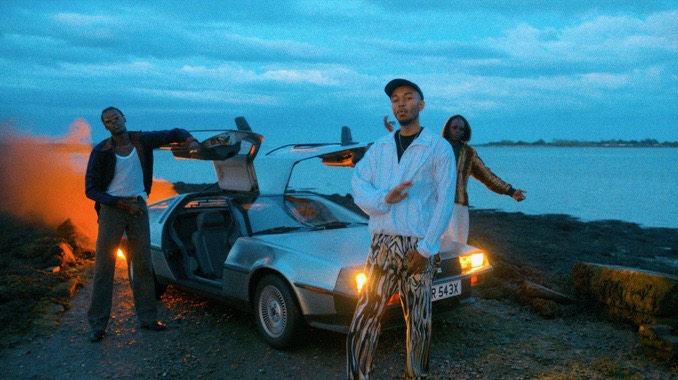 Receiving it’s premiere first play on Annie Mac’s on BBC Radio 1 show, Joseph debuts the track alongside another extraordinary, self-directed music video, existing in Wesley’s “space of magic realism” and featuring one of two working DeLoreans in the UK.

Speaking of inspiration and the origins behind the song Wesley says: “I started writing ‘Thrilla’ off the rum and orange juice in a neon blue London studio about a year ago. It became clear what the scope of the song could be as soon as I added the first 808, and the vibe was instant.”

“A few of my boys came by that night and I free-styled a loose version of the hook – it was enough to keep us going crazy until the morning. The name ‘Thrilla’ literally comes from that gassed drunk freestyle and it just stuck – the song is true to that bigger than life feeling you get in those moments.”

Detailing his creative process further, Joseph adds: “Six months passed and I had started to slowly take the song apart to restructure it with absolute attention to detail. I wanted to make something that felt big, but also had depth and a sense of journey to it. That needed to be seamless: like you forgot how you got there, but at the same time it feels like it shouldn’t have been any other way.”

“I finished the song at Lexxx’s studio near the sea. I would be working round the clock, experimenting with different transition ideas, or throwing in new licks, samples, and grooves to glue the whole thing together without losing anything, and he helped hugely at that stage of the puzzle.”

Listen to Thrilla below:

“When I was writing the song, images were already coming to mind visually, and I knew how the video was meant to feel texturally and metaphorically, too. Directing this one really developed the relationship I have with myself as a musician and filmmaker.  A lot of people said it wasn’t going to be possible and the idea wasn’t realistic, so I’m hugely thankful for everyone who cared and worked their asses off to make it real.”

Watch the official music video for Thrilla below:

Following the release of his self-produced debut single Imaginary Friends in the Spring of 2020, 24-year-old rapper-singer Wesley Joseph has gone on to create quite a buzz within the music industry – with his innovative beats, powerful rhymes and breathtaking visuals capturing the imagination of a new generation, all looking to seize control and take ownership of their narrative.

Originally born in Birmingham, where he was a member of the OG Horse collective alongside BRIT Award winner Jorja Smith, Joseph moved to London in 2016 to study film – finding inspiration and artistic freedom in the buzz of living in a new city.

Energised and reinvigorated by his new surroundings, Wesley began to really experiment musically, making beats on his laptop and converting his bedroom into a makeshift studio, learning his craft whilst also creating and developing his own unique style and sound.

With his debut project set for release this summer, we cannot wait to see what Wesley Joseph does next…

Let us know your thoughts on Wesley Joseph & his brand new single “Thrilla” over on Twitter @CelebMix now!