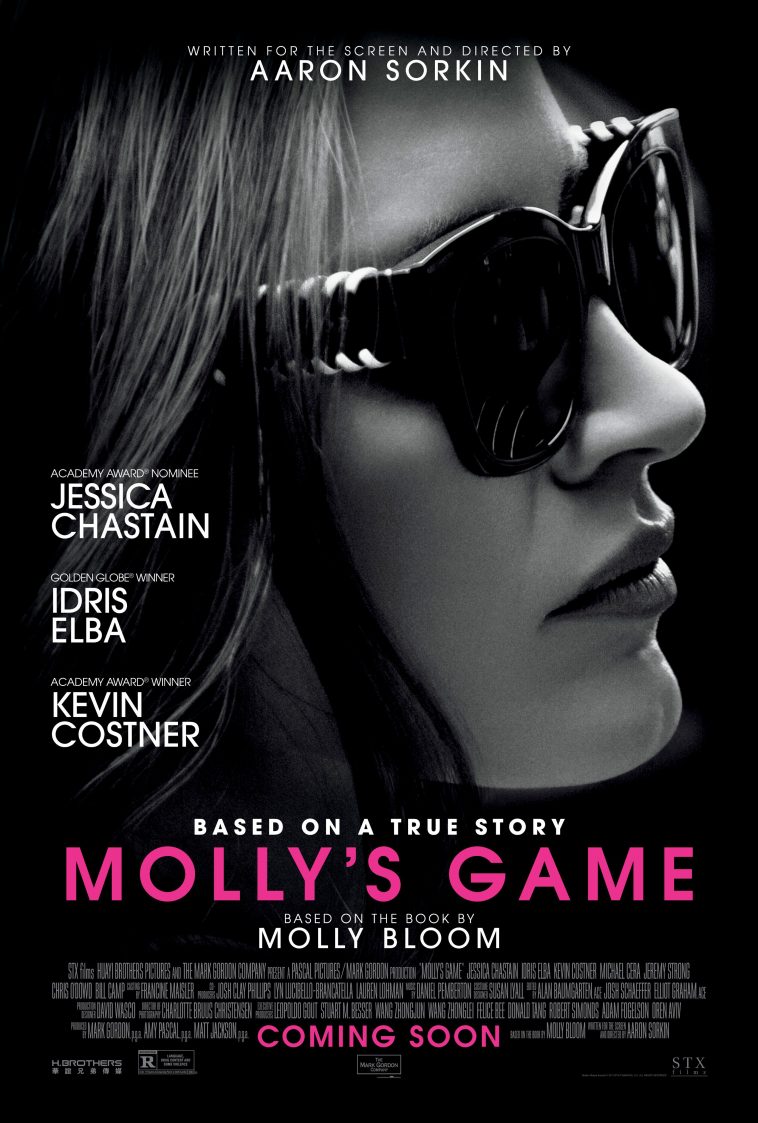 Molly’s Game is a movie released in 2017 and tells the story of a young future Olympian turned poker kingpin. The film is based on a true story, with the main character of Molly Bloom being played by Jessica Chastain.

Whether you are someone who likes to test their poker skills or someone who just enjoys a brilliantly made biographical film, here are the reasons why Molly’s Game became such a worldwide hit.

The biggest draw for this movie has to be the story, simply due to how unique it is, and the fact that it is based on real events. The lead character is Molly Bloom, a world class Mogul skier who is well on her way to becoming an Olympian.

However, these plans are quickly destroyed when an injury puts an end to her career. Instead of following her back up plan, go to law school, she decided to take a year off and move to Los Angeles.

While in Los Angeles, she meets an unsuccessful real estate agent at their work as a waitress, she becomes his office manager. Her duties ended up including running illegal poker games that the rich, famous and celebrities alike attended.

This grows into Molly becoming the head of these poker games. Running them on a regular basis for celebrities to attend constantly. She then makes a move to New York, where she plans on starting more games, however, close calls with the Russian Mafia, drug addiction, and more and more of her regulars being arrested makes things go from bad to worse.

She would go on to be arrested by the FBI, write a book and name many high-profile players who took part in her games. It is an absolute whirlwind of a story, and the fact that it is all real just adds a whole new level of amazement.

You add in the fact that the celebrities present at some of her games were the likes of Leonardo Dicaprio, Ben Affleck, Alex Rodriguez, Nelly, and many more, you start to see that Molly was most definitely not making a name for herself in a small pond, she was at the top of her game.

Clearly, it is the characters that set this film apart from almost every other poker film. Molly Bloom is not the first type of person you would think of when someone says “illegal poker Kingpin”, yet this is half the reason it is such an incredible story.

The part is played by Jessuca Chastain, with many saying it couldn’t have been done better by anyone else. What also sets Molly apart from what you expect, is how she is deeply entrenched in the illegal world of high stakes gambling, but remains incredibly honest and full of integrity.

This adds a strange layer to her character, as she is technically a criminal, but she is a criminal that has morals and wants to do things right and keep her games as clean and fair as possible, something you don’t associate with criminals usually.

Molly is portrayed in the movie, and the press at the time the events unfolded, as this Madame type figure, but the truth is she is very hard working, incredibly discreet, and pays her taxes. If you ignore the illegal gambling aspect of her life, she is an upright citizen.

Next to Chastain, Idris Elba plays the lawyer that represents her. What makes his role so enjoyable is how he juggles being the lawyer, but also almost being a sympathetic friend. The relationship formed between the two is movie magic, and they play off each other incredibly well.

In the world of biographical films, directors will oftentimes play fast and loose with many aspects of the story to make it a better aspect for the movie. However, Andy Sorkin is such a great director and the story is so good as is, all that was left was to tell it.

The movie garnered a lot of praise, with many people really appreciating how Molly Bloom was portrayed, and how Chastain was able to capture the unique personality of Bloom across the entirety of the film.

Considering this was Sorkin’s debut as a director, he was praised for the script as well, allowing audiences to become fully invested in the dense, complex and dynamic character that is Molly Bloom, and not filling the film with pointless frills.

What many believe makes this film so good is the combination of a unique character, and the way her story was told. Using flashbacks, courtroom scenes, and truly capturing her rise and eventual downfall in the criminal underworld.

Molly’s Game is most definitely a must-watch for anyone who is wanting to learn about a story that is not only rarely associated with women, but with women who, through work and effort, put themselves at the top of this shady world.

As mentioned, Molly was a unique and honest individual, and this playing out with a backdrop of the criminal underworld makes for an incredible movie that is a must watch for anyone who hasn’t had the chance to see it.