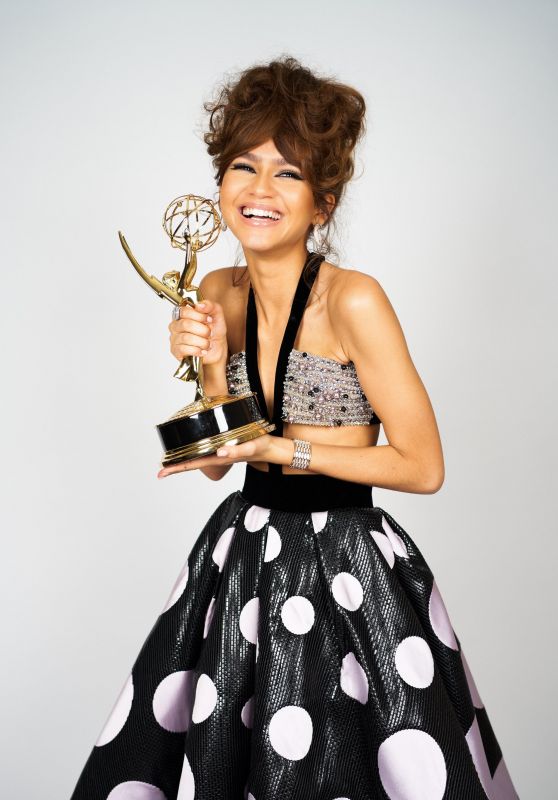 Over the weekend, Zendaya became the youngest woman to win Best Lead Actress in a Drama at the Emmy’s. The 24-year-old took home the award for her portrayal of Rue Bennett on HBO’s “Euphoria.”

The win came as a surprise to many, as the young star was a first time nominee in a category full of talent. While the odds were not entirely in her favor, Zendaya was awarded over Jennifer Aniston (“The Morning Show”), Olivia Colman (“The Crown”), Jodie Comer (“Killing Eve”), Laura Linney (“Ozark”), and Sandra Oh (“Killing Eve”). Comer had previously set the category record for youngest to win when she was awarded last year at age 26.

Due to COVID concerns, the award show was done a bit differently this year, with people virtually accepting awards. Zendaya claimed hers surrounded by a cheerful group of family, friends, and her team. “This is pretty crazy,” she said, “to all the other incredible women in this category, I admire you so much.” The actress also took a moment to give her support to people working to make a difference. “I just want to say that there is hope in the young people out there,” she said, “to all our peers out there doing the work in the streets: I see you, I admire you, I thank you.”

Congratulatory messages poured out from fans and fellow celebs all across social media, flooding the star’s comments with support. “Still don’t really have any words,” Zendaya wrote on Instagram, “feeling so much love right now.” She even received congratulations from Michelle Obama, when the two went live together on Instagram for National Voter Registration Day. “I watched every episode. I’m so proud of you,” she said.

As for “Euphoria,” the hit show targets early 2021 to start production on their second season. Since its first run wrapped over a year ago in August of 2019, a “special COVID episode” is on the way. It is said to serve as a connector between the two seasons and be a little something to hold fans over for the show’s highly anticipated full return. “I’m very happy with the work that we’re doing so far, and I can’t wait for everyone to see it,” Zendaya said.

Details around the special episode have not been released, but an announcement will eventually be on the horizons, sure to excite fans. Will you be tuning in? Let us know!

Congratulations to Zendaya on her well deserved win! Let us know your thoughts on Twitter @CelebMix