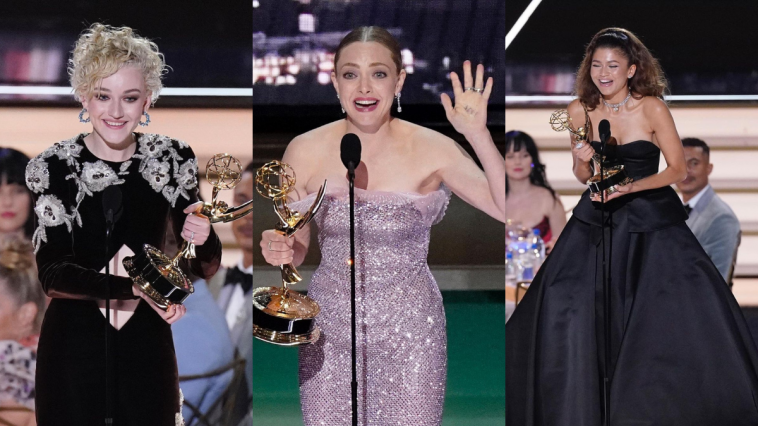 The 74th Emmy Awards, which took place on Monday night at the Microsoft Theater in Los Angeles, bestowed honours on some of the most accomplished artists in the TV and entertainment industry. The 74th Primetime Emmy Award honoured the greatest performers in American prime-time television programming from June 1, 2021, until May 31, 2022, both traditional and streaming, across 25 categories, as chosen by the Academy of Television Arts & Sciences.

The 2022 Emmys, hosted by Kenan Thompson, followed by a tight three-hour telecast on NBC that saw several repeat winners, along with quite a few surprising wins and upsets. Like in 2021, the award ceremony was largely in-person, embellished with glitz, glamour, and phenomenal talent, and reminiscent of pre-pandemic award shows. Let’s take a quick glance at tonight’s winners and highlights, followed by the complete list of winners.

Julia Garner took the award for the supporting actress (drama) role for the last season of Netflix’s “Ozark,” in which she played Ruth Langmore, marking her third Emmy win for the part. Amanda Seyfried bagged the award for lead actress in a limited series for her brilliant portrayal of Theranos founder Elizabeth Holmes in Hulu’s “The Dropout.” “Ted Lasso” on Apple TV+ won the best comedy series for the second year in a row, and Jason Sudeikis, once again, nabbed the top honour for actor in a comedy for his brilliant contribution to the series.

“Abbott Elementary” star Sheryl Lee Ralph made history as the second black winner for a supporting actress in a comedy, following Jackée Harry’s win for “227” in 1987, and delivered a moving speech while accepting her Emmy award. In the non-acting categories, Hwang Dong-hyuk became the first Asian director to win the drama series category for “Squid Game,” a non-English-language series.

Zendaya’s appearance at this year’s Emmys also marks a record as the youngest star to receive an Emmy nomination for producing. During her speech, Zendaya thanked the cast and crew of “Euphoria” as well as those who have shared with her their stories of addiction.

“My greatest wish for ‘Euphoria’ was that it could help heal people, and I just want to say thank you to everyone who shared their story with me,” she said. “I want you to know that anyone who has loved a Rue or feels like you are a Rue, I’m so grateful for your stories and I carry them with me and carry them with her. Thank you so much.”

Zendaya at the 2022 Emmy Awards

Here’s the complete list of winners for the 2022 Emmy Awards!

“Lizzo’s Watch Out for the Big Grrrls”

Writing for a Comedy Series

Writing for a Drama Series

Writing for a Limited Series, Movie or Drama Special

Directing for a Comedy Series

MJ Delaney, “Ted Lasso” (“No Weddings and a Funeral”)

Directing for a Drama Series

Directing for a Limited Series or Movie

Outstanding Writing for a Variety Series

Outstanding Writing for a Variety Special

“Adele One Night Only” (CBS)