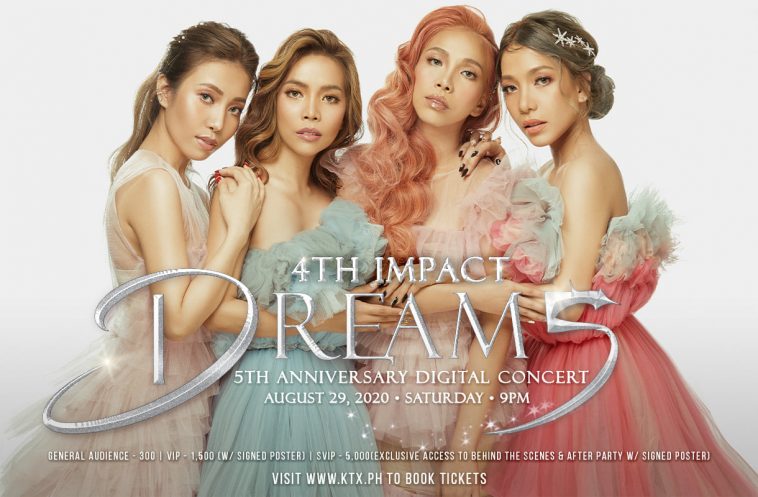 The teaser trailer is beyond exciting as they have used clips from The X Factor days, including their audition where they covered Jessie J, Ariana Grande & Nicki Minaj’s song “Bang Bang”, which is also the most-viewed video on The X Factor YouTube Channel, as well as clips from the live shows and from when they were on The X Factor tour.

There are also clips of them performing all over the world and from their gigs over the last couple of years. The four sisters are stronger than ever and thanks to crowd-funding through Patreon, and some very generous supporters, they’ve started working on their debut album. Tickets for 4th Impact’s “Dreams Digital Concert” are available now on the KTX website. The show will start at 9pm Philippine time (GMT+8).

We can’t believe that it’s been five years of 4th Impact! This is going to be the perfect way to celebrate their fifth anniversary, and we’re excited to be tuning in! There are various ticket options available: General admission ticket, a VIP ticket which includes a signed poster, and SVIP ticket which includes access to behind-the-scenes content, the after-party and a signed poster. Get your tickets now by clicking here!

The four-piece group consists of Almira Cercado, Irene Cercado, Celina Cercado, and Mylene Cercado. They recently released their first official original single “K(NO)W MORE“, and launched their Patreon account – make sure you subscribe to support the girls. They placed eighth in Superstar K6 and fifth on The X Factor, the UK version. Their vocals always gain critical acclaim, and they’re definitely ones to watch in the next few years.

Are you excited for 4th Impact’s “Dreams Digital Concert”? Let us know all about it on Twitter @CelebMix.