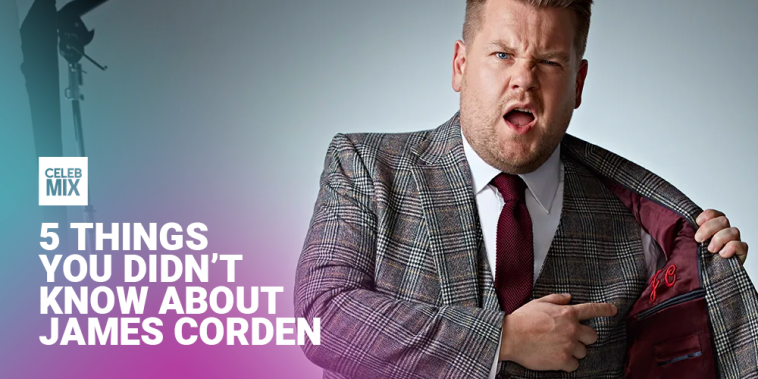 CelebMix is celebrating turning five…. so to celebrate we thought we’d find five facts about Late Late show host James Corden that you might not know!

He used to live with actor Dominic Cooper

While still making a name for himself James lived with fellow actor Dominic Cooper, in a really tiny flat with just one bed. They starred together in the National Theatre’s 2004 production of The History Boys. Before moving in together in 2008. The pair have stayed very close friends.

Dominic Cooper introduced him to the love of his life Julia

Dominic introduced James to the love of his life, his now wife Julia Carey. He became godfather to Max one of James’s three children. James proposed to Julia in 2010 on Christmas Day, by hiding the ring in her Christmas stocking. The pair tied the knot in star studied ceremony in 2012 at Babbington House.

His best friend is executive producer of the Late Late Show, Ben Winston

James met Ben when they were both still teenagers and working on a UK show, Teachers. Ben was working as runner on a gap year before going to University and James who was building up his career as actor had a role in the show. The duo hit it off right away and have stayed firm friends ever since. Ben was even best man at James’s wedding.

He starred in an advert for the drink Tango, which got banned from being aired on TV.

James starred in an advert for well known soft drink Tango, but the ad was banned from airing on TV by the Advertising Standards Agency as they felt it promoted bullying, as it saw him being chased by men who once they caught him forced him to drink the product.

James met Louis Tomlinson way before Louis had even auditioned for the X-Factor. The pair met on the set of popular UK TV show Fat Friends, in which James starred in. Louis’s little sister’s identical twins Phoebe and Daisy who were just babies at the time appeared in the show and Louis would often accompany his mum Jay to the set, even being an extra in some scenes. James and Louis used to play football together in between takes, as they were the youngest on the set. When Louis got into 1D, Jay called James up and explained Louis had moved to London and could he look out for him… James invited Louis to his house, Louis turned up with his bandmate Harry Styles and it was the start of a beautiful friendship.

What do you love most about James? Let us know about @CelebMix!