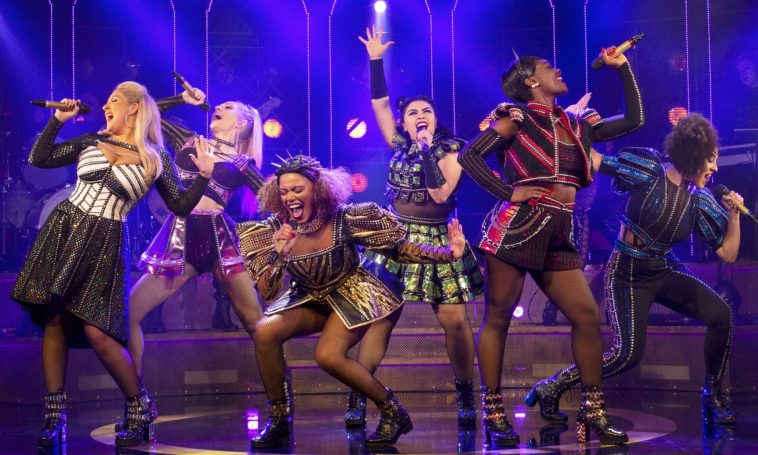 This week marks CelebMix’s fifth birthday so we’ve decided to celebrate by dedicating articles to some of our favourite pop culture phenomenons. This one is all about the Six the Musical!

Written by Lucy Moss and Toby Marlow, Six the Musical is based on the wives of Henry VIII as they compete in a hilarious battle to see who lived the worst life with the King. Each queen gets her chance to shine during this musical pop concert, and whilst it’s not 100% factually accurate, this modern retelling suddenly makes history a lot more appealing.

Packed with incredible pop-inspired anthems, sensational choreography and bucket loads of sass, Six has taken the theatre industry by storm, with productions in the West End, Broadway, Australia, and Norwegian cruises as well as regional touring productions and more.

Outside of the theatre stages, the casts of Six have also performed at award ceremonies, TV shows and more in order to promote this incredible musical. We’ve rounded up five of our favourite Six the Musical performances for your enjoyment – there’s No Way you won’t be bopping along!

The queens of Six were given the opportunity to perform at the 2019 Olivier Awards, where they were collectively nominated for Best Actress in a Supporting Role in a Musical as well as Best Musical. Despite going home empty handed, they truly stole the show with an electric performance which was loved by fans of Six and perfectly introduced the musical to theatre goers who had yet to see the show.

One of the best weekends in any theatre lover’s calendar, West End Live is an open air event which takes place in London’s Trafalgar Square. Allowing West End productions to perform a few of their songs, the event is fantastic for shining a spotlight on musicals of all kinds. Last year, the cast of Six performed on both days but we’ve chosen their Sunday performance as one of our favourites. Performing both ‘Don’t Lose Your Head’ and ‘Six’, the queens perfectly showcased the sassiness and cheekiness of their musical as well as some of the production’s infectious songs.

Whether you’ve been to see Six or not, if you know of the musical then there’s a good chance that you’ve fallen down the old YouTube rabbit hole and have watched countless Megasixes in your spare time. The Megasix is the show’s finale, which audience members are encouraged to film. With six principal cast members, three alternates and a dance captain/understudy, you never know who you might be watching on stage each evening, which makes the Megasixes all the more exciting. One of our favourite Megasixes was filmed last October, marking former cast members Millie O’Connell, Aimie Atkinson and Maiya Quansah-Breed’s last show. At the end of the Megasix, they’re joined by the alternates at the time Vicki Manser, Courtney Stapleton, Collette Guitart and Shekinah MacFarlene, whilst former super swing Grace Mouat also surprises the cast! This is Six at its finest – a celebration of sisterhood, and we couldn’t love the cast more for it.

Six the Musical has captured the hearts of thousands of musical lovers over the world, and when the London cast announced that there was going to be a flashmob outside the Tower of London, fans flocked in their droves to take part in the special event. Having learnt the choreography for ‘Six’, the fans brought the energy with many also wearing cosplay outfits replicating the queens! Halfway through, the principals and alternates from the London cast made an appearance and joined in with the fun, delivering an iconic performance.

With productions of Six being halted around the world due to the COVID-19 pandemic, Grace Mouat (former West End super swing) and Danielle Steers (current West End Catherine Parr) gathered the global casts for a very special lockdown performance of ‘Ex-Wives’ and ‘Six’. We’re still obsessed with this performance and how each queen gets her moment. It even features fans from the queendom! Until Six gets to dominate theatres again, there is no doubt that this is the ultimate performance. Bow down to the queens!

What’s your favourite Six the Musical performance? Let us know on Twitter @CelebMix