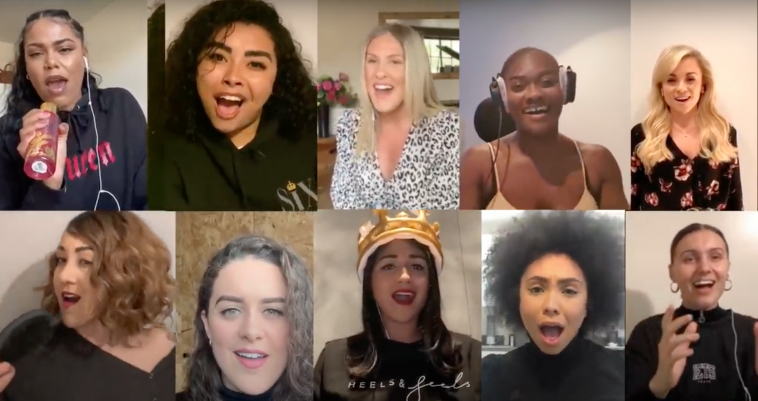 With theatre performances currently halted due to the current COVID-19 pandemic, cast members from Six the Musical around the globe have joined forces for a truly royal virtual performance.

The video also features one of the creators, Toby Marlow, who sassily delivers during the introduction of the queens, in addition to video footage from thousands of fans singing along to the beloved songs, with many showcasing their dance moves and replica cosplay outfits.

Whilst each Queen gave their time for free in order to create this special video, they do encourage fans to donate to various international charities to support performing artists in this time of theatre closures, if possible. These include the UK’s Acting for Others, The Actors Fund in the U.S., and Australia’s Support Act.

Six the Musical, which was created by Toby as well as Lucy Moss, is based around the six wives of Henry VIII: Catherine of Aragon, Anne Boleyn, Jane Seymour, Anne of Cleves, Katherine Howard and Catherine Parr.

We all know the famous rhyme “Divorced, beheaded, died, divorced, beheaded, survived…“, however, Six rightfully puts the wives in the spotlight as individual Queens who hilariously battle it out to see who lived the most difficult life at the hands of old Henry. Whilst the Queens revel in times gone by, Six is most certainly not your average boring history lesson.

Packed with toe-tapping bops which channel some of today’s most famous pop queens, a sassy and fierce script, as well as an empowering message, Six has captured the attention and hearts of musical lovers. What started out as a performance at the Edinburgh Fringe, has led to the musical opening up in countries around the globe.

If you’ve yet to witness the joy of Six the Musical for yourself then you can listen to the original cast recording below.

What did you think of the Queens’ performance? Let us know your Six the Musical thoughts on Twitter @CelebMix