MTV’s “Artist to Watch for 2015,” one of Billboard’s “10 Artists to Watch in 2015,” Radio Disney’s “Next Big Thing,” and Rolling Stones “10 Artists You Need to Know.” She may be new, but Bea Miller is already taking the world by storm. Her newfound success was gained shortly after the release of her debut album, “Not an Apology,” which was quick to hit #7 on the Billboard charts right after it dropped on July 24, 2015.

Bea Miller got her start at the age of thirteen when she received ninth place on the second season of “The X-Factor.” The young star’s edgy pop music, mixed with her signature raspy vocals, have allowed her to soar on the charts since then. Bea is bound to make it even bigger with her next album that is rumoured to drop sometime in 2016, but until then, here are five reasons why this well-deserving artist should receive more recognition.

1. Her Amazing Songs and Inspiring Lyrics

Bea works hard to produce songs that hold a lot of meaning to not only herself, but to her fans as well. She hopes to be the voice in the music industry that she never had while growing up. In an interview with Clevver News, she stated, “When I was younger, I never really had any young female role models in terms of artists who were actually really honest with their lyrics. It was really important to me when I started this to be that person for everyone else.” Bea helps write her own songs, and likes to put her personal experiences and real-life struggles into her music to help her fans relate and know that they are not alone. For a seventeen year old artist, that is a huge accomplishment. Her music is aimed towards self-empowerment and being yourself, and has registered really well with her fans. Her song “Paper Doll,” is all about dealing with bullies and learning to stand up for oneself, which is something Bea feels very strongly about. Another one of her hits, “Fire N Gold,” is a very powerful song that is meant to tell everyone that they are worth it and they are important. Bea’s music is not only catchy and fun, but also very meaningful.

2. Her Friendship With Fans

Not only is Bea a talented artist, but she also happens to have a down-to-earth mindset and kind heart. Bea’s love for her fans makes her one of the most deserving artists in the industry. She treats her supporters more like friends than fans, and it shouldn’t go unnoticed. She challenges her fans to come up with creative meet-and-greet poses, and she posts her favorite ones. She asks for their opinions on anything from hair color to clothing choices, and she is always keeping them up to date on her life. Not to mention, she is constantly tweeting and interacting with her fans on social media. In an interview with Billboard, the teen pop sensation expressed “I didn’t realize that most artists don’t read their mentions which I think is crazy cause like the whole reason why I have Twitter is to interact with my fans.” When she is not tweeting about music, mentioning her fans, or posting about her super cool boyfriend, Jacob Whitesides, (they are totally relationship goals BTW!) then she’s tweeting encouraging and loving words to her fans to show just how much they mean to her.

3. Her Stance On Equality

Just when you think it can’t get any better than this, it does! To add to the multitude of reasons why we love her, she stands up for what she believes in. Bea is constantly seen showing her support for the LBGTQ+ community and even tweeted her excitement about the iconic Supreme Court ruling in America on June 26, 2015. She also got a really awesome equality tattoo to celebrate! Bea has very personal experience when it comes to this topic, considering she has two moms. Bea talked with Idolator about the historic day and stated, “Today is especially important for me because my moms were never allowed to get married.” Bea even sings her feelings on the important subject. In her song “We’re Taking Over,” written by Demi Lovato, the lines “This is for the girls who like chicks and this is for the guys who like chick-flicks,” are very meaningful to Bea and many of her fans. Bea Miller is so unapologetically awesome, hence the name of her album, “Not an Apology,” and we love it! 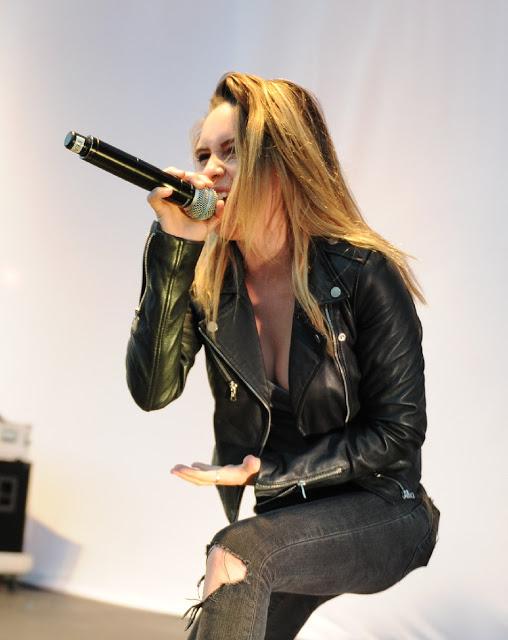 Bea was born to perform and it definitely shows in the way she presents herself while on stage. She doesn’t leave a single space uncovered and makes sure to interact with as many fans as possible. She carries herself with such strength and confidence while performing and it’s a pleasure to watch her do her thing. Also, her sick hair flips and hand motions just add to the already amazing stage presence this pop star has. She encourages fans to sing along, which creates a really strong connection, and the experience is unforgettable. Her unique voice is just as wonderful live as it is on recordings and we must say, she is definitely an artist that you have to see in concert.

Last but certainly not least, it’s hard not to love a girl who has such killer style and such a strong selfie game. Her edgy but cute outfits paired with that perfect pout leave us clicking like on every single one of her photos. From her ripped jeans and bomber jackets to her heels and crop tops, she pulls it all off. She is not afraid to add a little punk rock edge to her wardrobe and it definitely works. Her stage outfits, award show ensembles, lazy day sweats, and everything in between make her a fashion inspiration to us all.

Bea Miller is an all-around fabulous artist and it’s definitely time for her to start receiving the praise she deserves. Not only is she super talented, but her uniqueness and edge just add to the totally cool and powerful teen she is! We can’t wait to see what 2016 holds for her.

Don’t forget to check out her amazing talent for yourself, and let us know what you think by commenting below or tweeting us @CelebMix!